One man's 'Team Canada' approach is another man's 'botched' bill 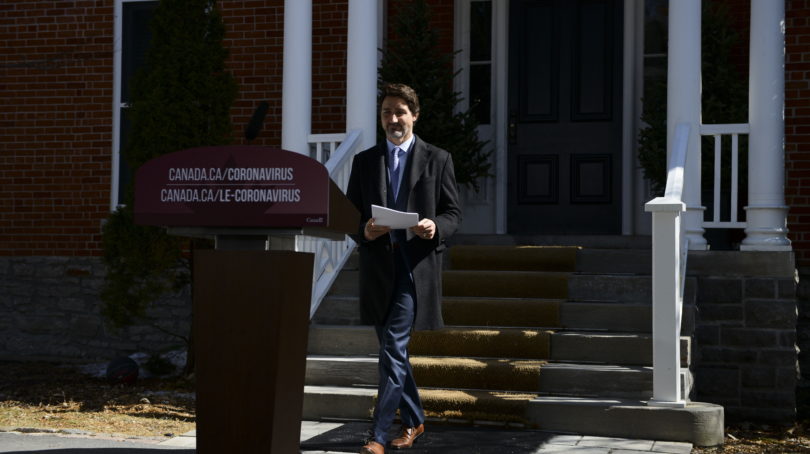 Prime Minister Justin Trudeau wants Parliament to sit again. Tory leader Andrew Scheer is in even more of a rush. “Canada hasn’t seen this type of civic mobilization since the Second World War,” Trudeau said at his daily press conference. “These are the biggest economic measures in our lifetimes to defeat a threat to our health.” Read the full transcript of his remarks.

The PM called for a “Team Canada” effort to pass more emergency measures—namely, the 75-per-cent wage subsidy that builds on the original 10-per-cent measure. Scheer, speaking in Regina, claimed the House would return only because the Liberals had “botched their own legislation on the wage subsidy.” He blamed a “discrepancy” between what’s in Bill C-13 and what the Liberals want to roll out as the real reason Parliament has to come back.  His finance critic, Pierre Poilievre, has been saying the same thing for days.

At her own presser, Health Minister Patty Hajdu admitted Canada’s emergency stockpile of personal protective equipment “likely” was not enough to respond to the current surge in demand. “I think federal governments for decades have been underfunding things like public-health preparedness, and I would say that obviously governments all across the world are in the same exact situation,” she said.

The latest on repatriation: Global Affairs Canada said flights from Algeria, Ecuador, Senegal, Democratic Republic of Congo, Hungary and Spain all landed in Canada yesterday. The feds were also in the process of organizing flights from Ethiopia, Burkina Faso, Côte d’Ivoire, Peru, Algeria, Poland and Pakistan, as well as several on successive days from India. GAC noted that 393,523 Canadians have so far registered abroad—about one per cent of all Canadians.

The top public-health officials across Canada are 2020’s unlikeliest rising stars—but as we celebrate their expertise and composure, writes Marie-Danielle Smith, we should remember that the top docs are still human beings.

If we respect these officials enough to follow their prescriptions and put their faces on our T-shirts … we should respect them enough not to trust them blindly, or pray to their icons, to know that they are fallible humans, doing their best just like everybody else.

You can’t #stayhome if you have no home: Some of the Canadians most vulnerable to the coronavirus live in shelters across the country, writes Paul Wells, where staff are afraid to come to work as they prioritize their families’ health. It’s a “perfect storm,” says Tim Richter, the Calgary-based CEO of the Canadian Alliance to End Homelessness.

We’ve got this vulnerable population. We’ve got staffing issues, where staff are trying to take care of their own families or are afraid to go to work. And you have a lack of PPE in the shelters as well. Because they’re not prioritized, they’re not getting access to the protective equipment that is required to deal with this population.

The aforementioned Poilievre responded to Wells’s story with a promise that Conservatives would soon announce their own ideas to “unlock hundreds of millions of dollars” in charitable giving.

Can Joe Biden win the 2020 election from his living-room couch? Will Donald Trump try to postpone the vote? What comes of the some of the most stubbornly resilient democratic institutions in the world as the coronavirus invades hospitals and homes? Allen Abel reports from Delaware, home of a time-honoured post-election tradition of burying a literal hatchet, as only he can.

You can’t spell pandemic without D-E-M, and so it was the Democrats of places like Sussex County who stood to lose the most. (Subtract those three letters from the word and check out what remains.) At one point in March, needing to select pro-Biden delegates for the Democratic National Convention (should it not be cancelled), Jane Hovington and her committee members arranged for party members to caucus in a parking lot without leaving their automobiles. But then even that was deemed too close for comfort and they put it off until Trump-knows-when.

Trudeau moved Harpreet S. Kochhar, a senior bureaucrat at Immigration, Citizenship and Refugees Canada, into a new role as associate deputy minister at Health Canada. Kochhar will, a release says, “support” the “whole-of-government, comprehensive, and coordinated approach” to the COVID-19 pandemic. His last gig oversaw, among other things, the administration of millions of visa and citizenship applications. Fun fact: Kochhar is a trained veterinarian, and was once Canada’s chief veterinary officer.