Paul Wells: Ads making bogus threats about health care cuts are part of a long tradition. And they usually come from a party that's about to lose. 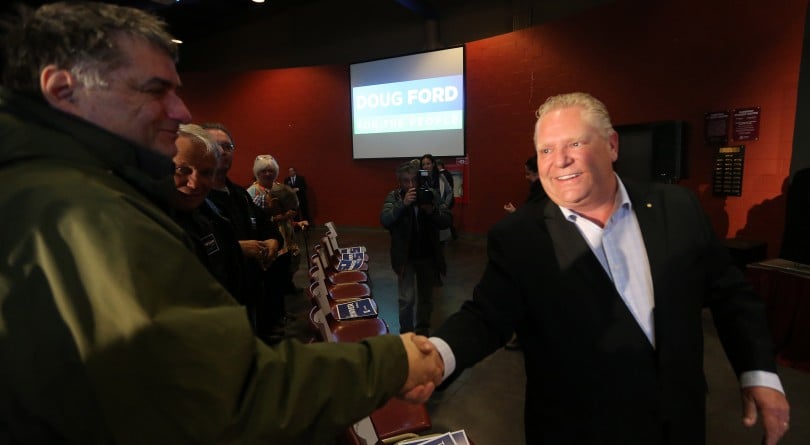 I’m not sure when health care became the go-to substitute for serious political debate. But it’s a pretty safe bet that when you absolutely, positively need to move votes in bulk, you accuse your opponent of wanting to take health care away.

In Ontario that moment has come early this year. It’s a kind of tribute to the imposing polling lead Doug Ford’s Conservatives have built up—before the formal campaign even begins—that Ford’s opponents are already accusing him of wanting to shut down the province’s health care system.

His opponents, in this case, are a group calling itself Working Ontario Women. It’s almost certainly a front for a coalition of labour unions, but I’m forced to guess, because W.O.W.’s “Who We Are” page on its website is comically opaque. “WOW is led by women who are dedicated to lifting up working women in Ontario, supported by organized labour and women’s activist groups.” I like to err on the side of more political speech rather than less, so W.O.W.’s veiled contribution to the discourse is welcome, but when they lie, I get to make fun of them. “They cut $36 billion from health care,” the group’s latest ad says. “Do you really believe Ford won’t cut your health care? Stop Doug Ford from gutting your health care.”

The “they” in W.O.W.’s ad is Stephen Harper’s federal Conservatives, and the claim that he cut $36 billion from health care is pure baloney. It’ll sound familiar—I’m sure it’s designed to sound familiar, which gives it an aura of plausibility—because it’s borrowed from some campaign rhetoric Tom Mulcair, then the NDP leader, used in the 2015 federal election.

Here’s where the claim comes from. (These next two paragraphs are simply cut and pasted from something I wrote in 2014, because nothing ever changes.) In December 2011, Jim Flaherty, then the federal finance minister, met his provincial colleagues to announce his plans for health transfers after a 10-year deal set by Paul Martin ran out in 2013-14. The 2004 Martin deal declared that cash transfers to the provinces for health care would increase by six per cent a year for 10 years. Harper simply kept implementing the Martin scheme after he became Prime Minister.

What Flaherty announced, without consulting with the provinces first, was that health transfers would keep growing at six per cent through 2016-17. Then, they would grow more slowly. How slowly would depend on the economy. The faster GDP grows, the faster transfers would grow. But, if the economy tanked, the rate of growth could fall as low as three per cent per year. Flaherty said this scheme would stay in place through 2023-24.

Now, if you insist on calling a reduction in the rate of growth a cut, there’s nothing I can do for you. You have to live with your personal demons. But here’s what actually happened to federal health transfers in the last few years of Conservative government and the first few years of Liberal government at the federal level.

Then the Trudeau Liberals came to office, and the late Jim Flaherty’s proposed changes to the CHT formula were implemented without amendment by the new government. The CHT grew by 2.7 per cent in 2016-17/2017-18. It’s projected to grow by 4.0 per cent, 4.0 per cent and 3.7 per cent in succeeding years.

If I’m going to call a reduction in the rate of growth a cut, I’m also forced to point out that the “cuts” came under the Liberals. The steady growth at a higher level came under the Conservatives.

But note that none of this conversation has anything to do with what Doug Ford plans as Ontario premier. The only actual promise he’s made on health care, so far, is to put an extra $1.9 billion over 10 years into mental health.

That promise matches the one his sad predecessor Patrick Brown made in his platform before Brown’s political career went down to self-inflicted ruination. It also matches, and therefore effectively doubles, extra money earmarked for mental health that Liberal finance minister Bill Morneau has set aside for Ontario over the next decade. It’s less than the Ontario Liberals are now promising to spend on mental health. It’s not a huge amount of money—we’ve all had to get used to dividing large numbers by many years, as politicians get used to making promises that stretch over three separate governing mandates—but it’s more than nothing.

In this, they’re part of a proud tradition of campaign humbug around health-care funding threats. The 2016 Brexit referendum in the U.K. hinged in part on a promise, emblazoned on the Leave campaign bus, to repatriate $600 million a week in British payments to the EU and spend it on the National Health System instead. The whole thing was claptrap.

Earlier, in the 2014 Scottish independence referendum, each side tried to out-scare the other on the NHS. The Scottish nationalists’ claim to perceive a looming mass privatization of the NHS now stands revealed as a lie, or at best as a really bad guess, but you can be sure they’ll do it again next time. So will their opponents. It’s odd, because Britain in or out of the EU, with or without Scotland, will have roughly the same health care it has today. Probably at some level voters understand this. From a campaign strategist, saying “Start running the health-care ad” is the same as saying “I’m fresh out of ideas over here.”

In Canada, at the federal level, the ad accusing the other parties of secret plans to gut health care marks the traditional end of Liberal hopes. I can’t find the ads Stéphane Dion ran in 2008, when demand for a carbon tax turned out to be too low to sustain the Liberals, but here’s the one Michael Ignatieff ran in 2011, warning—more accurately than W.O.W.—of “massive cuts to increases” in health spending.

The reality is that cuts to health spending are rare and usually a sign of advanced general distress in the economy. Every government would rather cancel spending on just about anything else than cut health-care spending: voters are too sensitive and vigilant. Governments did cut in the mid-1990s, but that’s largely because previous governments had spent decades outspending their revenues.

I think political parties tell horror stories about health care because if you ask voters which issues they care about, they often put health care and education at the top. But caring about health care isn’t the same as believing one party can deliver better solutions than the others. Phrased in fancy language, I’ve never been sure health care is a salient campaign issue. You’ll notice here I’ve listed a bunch of parties that ran scary health-care ads, just before losing.