Ontario: History is written by winners

Paul Wells on what winning means for Wynne 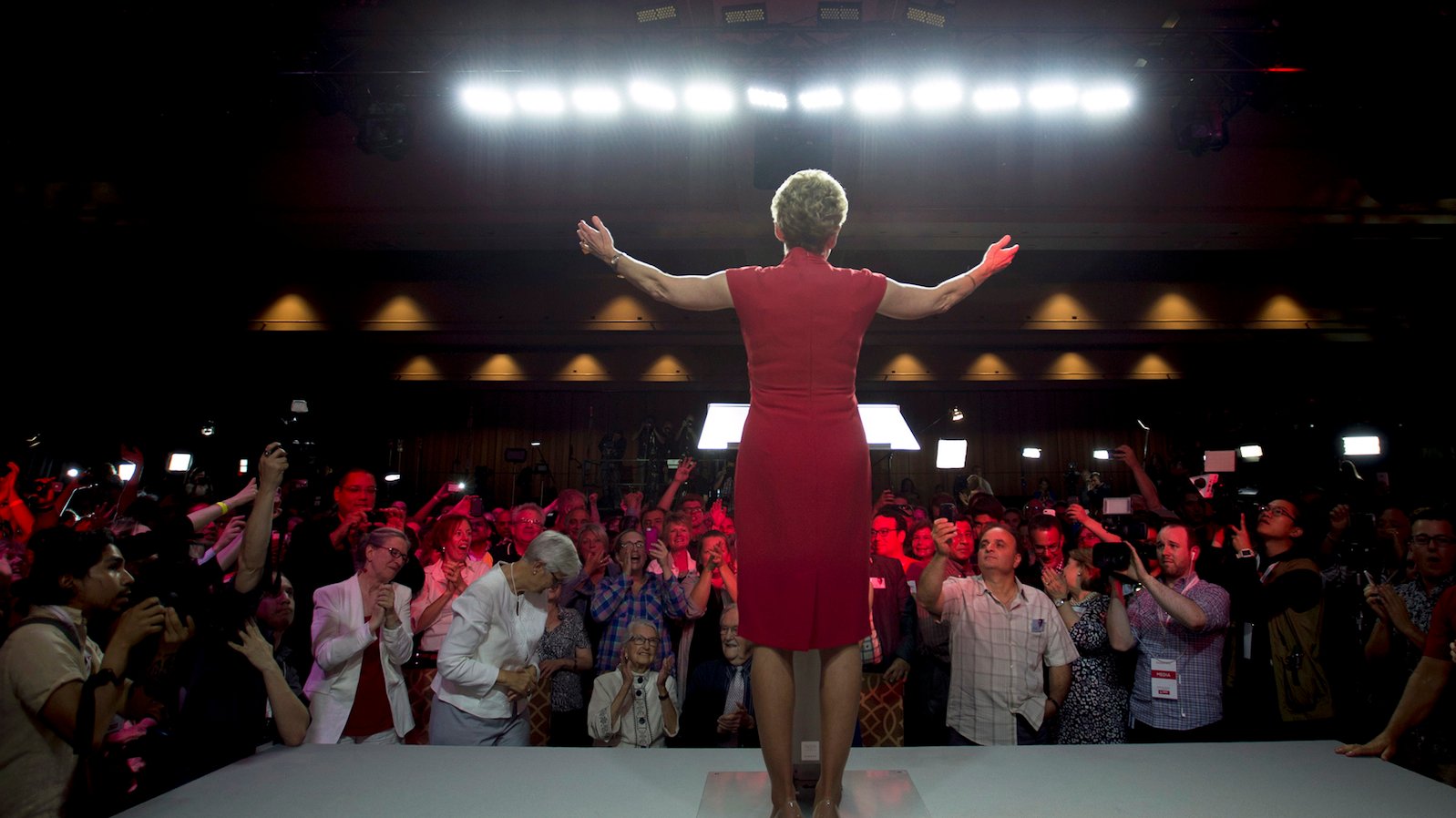 I vote for different parties in different elections. I voted Conservative today in a riding where the Conservative candidate had no chance. I believe economist Don Drummond identified serious structural problems when his report described a provincial government apparatus the province’s shrunken industrial base can no longer afford. I saw no evidence the Liberal government took Drummond’s report, which Dalton McGuinty commissioned, nearly seriously enough.

I thought Tim Hudak would move promptly toward a more sustainable ambit for the provincial government. The prospect didn’t seem joyful: I was quite sure that if Hudak’s Conservatives won, there would be a lot of acrimony around everything he did. But even though Kathleen Wynne’s Liberal platform also sets the stage for substantial spending restraint, I had no reason to believe, based on the evidence of her behaviour in office or that of her predecessor, that she would follow through.

In the end, the party I voted for lost both my riding and the election. Kathleen Wynne’s victory is historic, it is almost all hers, and its meaning is a little opaque, because there is a tension between her platform and her record that will be resolved only by her actions, now that she has the length of a majority mandate to show Ontarians what kind of premier she wants to be.

Historic: She is Ontario’s first elected woman premier. Almost all hers: People who make a living proclaiming their knowledge of strategy said she was crazy to put herself at the centre of her party’s messaging and communication to the extent she did. She voiced her own attack ads. To voters upset about the mess McGuinty left behind, she offered her person as sufficient guarantee that the past would stay past. It’s what Paul Martin attempted in 2002-06, but Wynne offered none of Martin’s creepy intramural fratricide and never benefited from the fast-burning personal popularity that seemed, at first, to be Martin’s greatest asset until he ran out of it. The funny thing about a cult of personality is, sometimes it works better if you don’t have quite as much personality. Rule One in Bill Davis’s Ontario is: don’t get on people’s nerves.

But there are a lot of Conservatives in Ontario who have forgotten the province was ever Bill Davis’s. There are a lot of people who accreted around Mike Harris in 1990 like barnacles — the Little S–ts, Frank magazine used to call them — and they’ve never really grown up. They were at Trinity College or Upper Canada College or Hillfield Strathallan or some other dreary Anglo-Saxon dumping ground in the early ’80s when Ronald Reagan came on TV and fired the air traffic controllers, and they’ve spent the rest of their lives looking for an excuse to play Ayn Rand Home Edition. It even worked in 1995, when Mike Harris came back from his 1990 drubbing and years of the worst recession, combined with the worst government, Ontario had seen in ages. Harris’s “Common Sense Revolution” worked because by 1995, thanks to Bob Rae, common sense seemed revolutionary.

These are quieter times, and Ontario’s problems today are more genteel than in 1995. Incumbents have had a pretty good run of things in recent Canadian elections despite major self-inflicted headaches — in British Columbia, Alberta and Ottawa most prominently. Insurgencies win in turbulent times; in relatively calm times, an opponent’s best hope of beating an incumbent is to run as a better incumbent, to offer steadier judgment than the governing party in place. That’s what Philippe Couillard just did in Quebec. Let Pauline Marois concoct wild schemes; he’d concentrate on “les vraies affaires.”

Hudak, on the other hand, had to keep impressing the Ayn Rand League, thanks largely to his ever-shaky command of the party’s leadership. That’s why he put a big number on his public sector job-cut target, because he decided his target audience was people who think eliminating public sector jobs is always excellent. Compare and contrast: During the 2011 federal election, I worked hard to get a succession of federal Conservatives — Jim Flaherty, John Baird — to give me any indication of the scale of public sector job cuts the Harper government had in mind. Baird pledged, with a straight face, to protect the National Capital Region’s bureaucrats from the kind of ravages the Chrétien-Martin Liberals had inflicted in the 1990s.

It’s a crucial difference. Nobody seriously doubts Stephen Harper is a conservative, so he can tell conservatives they have to wait. That’s why I saw Alison Redford’s Alberta Conservative victory over Danielle Smith’s Wildrose party as a vindication of the Harper style, even though a lot of Harper Conservatives supported Wildrose: because politics isn’t about scratching your swollen id. Harper’s conservatism is a broad and not always internally coherent coalition, and it spends a lot of time wondering when something exciting will happen. I have a lot of Conservative friends who decamped from Ottawa for the duration of the campaign. I bet a lot of them felt they were taking a vacation from a torpid zone of fake conservatism in a fresh new spawning ground of the real thing. Now they’ll go back to their Ottawa jobs and Liberals will go back to their Queen’s Park offices. The point is not that Harper is less conservative than Hudak and Danielle Smith. It’s that he likes to win.

But back to Wynne. She ran on activist government, and celebrated victory by congratulating those who want to “build up Ontario.” But Ontario can’t afford the Ontario it’s got. Wynne’s own platform quietly acknowledges this. Hard public sector wage freezes and a new program-review exercise won’t feel much like building up. If she abandons them for more spending, she simply postpones harder choices. She has proven herself a redoubtable politician; now she had better be a very good premier, because she’s put herself in a fix to get the mandate she just won.

But that’s a high-class problem, one she would not trade for the simpler life Hudak can now look forward to. (A word on the NDP’s Andrea Horwath: she is in trouble with some New Democrats for forcing this election and losing the bargaining power she had in a minority-government legislature. But the balance of power is not a comfortable place to be after awhile, and Horwath was well into the zone where, every time she propped Wynne up, voters would wonder why. The NDP should cut her some slack.)

Wynne is now the premier, fair and square. She can define Wynne Liberalism in a hundred acts a week, for years. She gives the Liberals a shot at a dynasty of the sort the Progressive Conservatives used to enjoy in the days of Frost and Robarts and Davis. Or she could yet screw it all up. It’s up to her. That’s the range of possibility victory offers.