Ontario will re-open for business. But expect a marathon, not a sprint.

Politics Insider for April 28: The House of Commons is back tomorrow, the federal wage subsidy is open for applications and western separatists might join forces 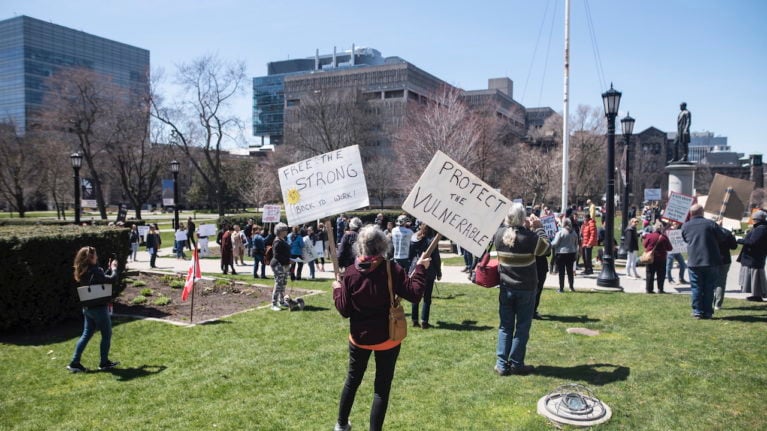 Demonstrators gather during a protest to end the shutdown due to COVID-19 at Queen's Park in Toronto on Saturday, April 25, 2020. (Tijana Martin/CP)

Ontario now has a plan to re-open for business (read it here). Anyone who wanted to circle dates on their calendar, though, will be chagrined by what’s billed as a three-stage “road map”—which, to extend the driving metaphor, comes with plenty of waypoints but no driving times. The province will peg its progress to various achievements: fewer untraceable cases, for example, and a consistent reduction in hospitalizations. Each of the three stages will be evaluated every two to four weeks, though certain public health measures might be retightened.

Let’s reopen Ontario and Quebec. You go first. Quebec also announced dates next month when elementary schools will re-open—May 11 outside Montreal, and a week later in the big city. Class sizes will be capped, school will be optional, and the doors will only open if the province’s outbreak doesn’t take a turn. There’s logic, writes Paul Wells, to Ontario and Quebec’s intentionally cautious plans:

How do you feel about sending your own son or daughter back to school tomorrow? Are you ready for a family dinner this weekend? Everyone’s got to die of something, so how about Uncle Ned in late May by drowning in his own pulmonary fluids? That’s a harder call. It helps explain why the plans Legault and Ford released on Monday were, in Ford’s words, road maps and not timetables. And why it left some columnists, whose responsibility extends no further than their keyboards—I know, I live there too—righteously cranky.

Speaker Anthony Rota put out the official word yesterday that the Commons will be back in session tomorrow at 2:30 p.m. MPs will meet once the special committee on COVID-19 wraps up. This is all a bit of smoke and mirrors: the special committee’s members will simply stick around for the sitting of the House. Rota’s notice said the House will debate “a bill to enact certain measures in response to COVID-19.” That bill will cover, at the very least, emergency aid measures for students.

Take their CEWS: In case any doubters were doubting the take-up of a federal wage subsidy, Prime Minister Justin Trudeau mentioned yesterday that 10,000 businesses had applied for the Canada Emergency Wage Subsidy when his morning remarks were fresh from the printer. Even if those early applicants employed an average of only five people, and even if they only qualified for half the maximum weekly subsidy, that still adds up to $21,175,000 for the first week alone. Those numbers will no doubt rise sharply. (Here’s how to apply for the CEWS, and here are Trudeau’s full remarks.)

If you’ve organized Zoom calls with family and friends, you know one bad connection is all it takes for everything to go off the rails. Well, 338 MPs yesterday jumped into a dry run in advance of their first virtual sitting this morning. There were lighter moments, including inadvertent shouting of playful monikers and the first parliamentary doggo cameo (that’d be Midas, the pup belonging to Michelle Rempel-Garner). Liberal MP Adam van Koeverden—find him here, Where’s Waldo-style—used Zoom’s virtual background tool to make his home more like a House. And Employment Minister Carla Qualtrough wears cool hats.

How geopolitics is shaping the race for a COVID-19 vaccine: Aaron Hutchins writes that an unprecedented scientific sprint for a vaccine has produced a massive spirit of solidarity among scientists, many of whom are keen to work together to save lives. But politics, as ever, gets in the way. Hutchins explores the key questions that will arise the moment a proven cure hits the market:

With most nations’ economies grounded to prevent the spread of the virus, the first vaccine will become the most highly coveted resource on the planet. So who gets first dibs? And who gets to decide?

338Canada takes on America 2020: Philippe J. Fournier, our in-house astrophysicist-turned-polling dynamo, has started watching this year’s race for the White House. The odds are against a Donald Trump re-election, he writes, but a Joe Biden win is no sure thing. To prove his point, Fournier recalls his own insane run of good luck at a Las Vegas poker table. Astrophysicist, polling specialist, and now high-stakes gambler? Who knew.

Paul Boothe, a former economics professor and provincial and federal deputy minister, led the federal team negotiating the restructuring of GM and Chrysler in the middle of the 2008-09 financial crisis. Boothe, writing in Maclean’s, says that taxpayer bailouts of big corporations should be a last resort.

A little news from the Western Standard: A Wildrose Party could be back in Alberta, with a separatist twist. The Freedom Conservative Party of Alberta and Wexit Alberta have, as long as their members give their blessing, decided to merge. The fused coalition of disenchanted Albertans will be known as the Wildrose Independence Party—and they’ll fight for a “strong, free, and sovereign” Alberta, complete with its own constitution and charter of rights.

In these dark times, feast your eyes on this Ottawa developer’s billboard—spotted by the Toronto Star‘s Susan Delacourt—that sneaks in a cheeky easter egg fit for this political town.