Opening of Parliament reflects the brutality of age-old traditions 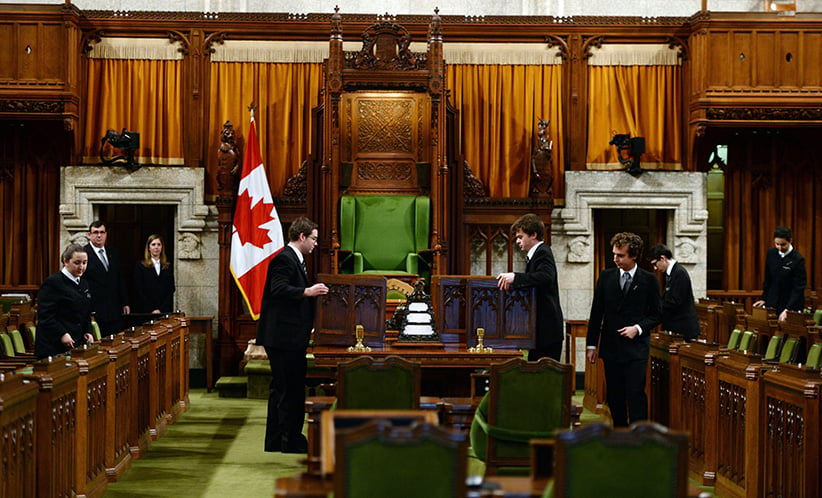 Ballot boxes are put in place as staff and pages prepare the House of Commons in advance of Thursday’s vote for the new Speaker on Parliament Hill in Ottawa on Wednesday, Dec. 2, 2015. (Sean Kilpatrick/CP)

OTTAWA – The opening of Parliament is ripe with traditions and symbolism that reach back in time to the beginnings of parliamentary democracy.

They are modern reminders that the political evolution which led to the modern Canadian system was slow and sometimes bloody. And they come from the mother of parliaments — at Westminster in London.

For instance, the newly elected Speaker of the Commons is required to feign reluctance to take the chair and is symbolically dragged there by the prime minister and the leader of the Opposition.

Why? Because the speakership could be a deadly job in the early days, especially if the speaker had to deliver unwelcome news to the monarch. The website of the British parliament says seven speakers were executed by beheading between 1394 and 1535.

Parliament opens with the speech from the throne, read by the Governor General in the Senate.

Why? The earliest parliaments were literally summoned by kings who needed money. The monarch went before the assembled representatives and told them what he wanted. Today, the Queen’s representative (or the Queen herself on a couple of occasions) still reads an outline of legislation to be proposed in the new Parliament.

Why in the Senate? Because the Queen and her vice-regal representatives have been barred from setting foot in the Commons since 1642.

That is because King Charles I had a troubled relationship with parliament and tried to govern without it. In January 1642, he showed up in the Commons determined to arrest five MPs, who had been spirited away to safety.

When he demanded that the MPs be turned over, the speaker delivered a cautious reply:

“May it please Your Majesty, I have neither eyes to see, nor tongue to speak in this place, but as the House is pleased to direct me, whose servant I am here, and I humbly beg Your Majesty’s pardon that I cannot give any other answer than this to what Your Majesty is pleased to demand of me.”

The King responded that he, too, had eyes: “I see the birds have flown.”

Charles and Parliament ended up at war with each other and he eventually was executed.

But to this day, his incursion into the Commons is remembered at the opening of Canada’s Parliament.

The Usher of the Black Rod, in effect, the sergeant-at-arms of the Senate, strides down the hall to the Commons and raps on the doors with his cane of officer, summoning MPs to the Senate to hear the throne speech.

The MPs troop down to the Senate, led by their Speaker, who formally introduces him or herself and asks that the Crown recognize MPs’ rights and privileges, including freedom of speech during debates.

This tradition recalls the long struggle for parliamentary supremacy and the importance of MP privileges.

What looks like a quaint and outmoded way of doing things serves as a reminder that the road to democracy was a rough one.