Opening the door to Ebola-hit countries

The Liberals have rolled back the controversial Tory freeze on visa processing for residents of Guinea, Liberia and Sierra Leone 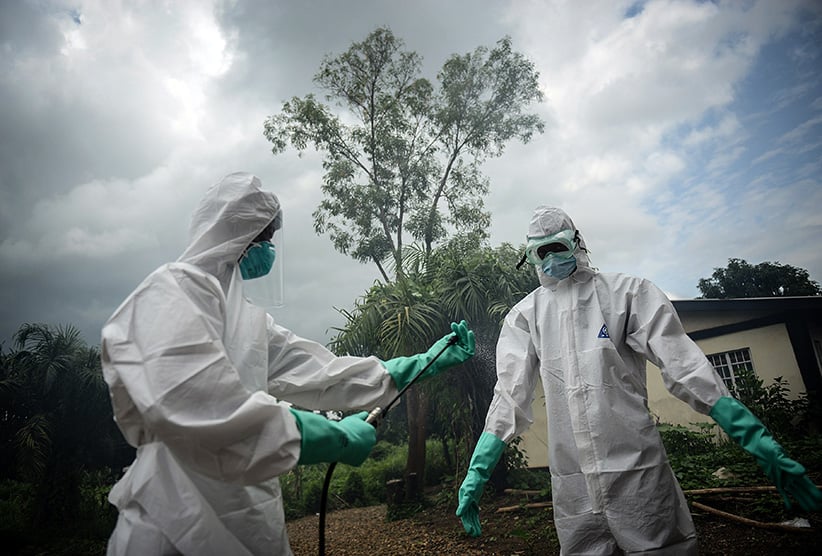 A group of young volunteers wears special uniform and wash their hands with chlorinated water ahead of sterilizing the bodies of people, died due to the Ebola virus, in Kenema, Sierra Leone on August 24, 2014. People work for 6 dollars per a day in burial and sterilizing works in Kenema where the infection of the virus is mostly seen. (Mohammed Elshamy/Anadolu Agency/Getty Images)

Immigration Minister John McCallum lifted a controversial ban on people travelling from Ebola-affected countries earlier this month, ahead of Guinea being declared free of the deadly disease.

Former immigration minister Jason Kenney froze all applications for temporary and permanent residence from people who had recently travelled to Ebola-affected countries, which the World Health Organization defines as those with widespread and persistent transmission of the deadly virus. Kenney ordered the freeze in October, 2014, at the height of the outbreak in West Africa and just after a handful of cases surfaced in the U.S.

Critics argued the freeze wouldn’t do anything to protect Canadians, and in fact could hurt the affected countries at a time when they needed to keep their economies going amid a major health crisis. The World Health Organization advised against travel bans since Ebola isn’t an airborne disease; it can only be transmitted through direct contact with bodily fluids. The Conservatives found a loophole in an international health treaty by imposing a partial ban rather than a full one and allowing Canadians to continue to travel to the affected areas.

Dr. Annalee Yassi, director of the University of British Columbia’s global health research program and the Canada Research Chair in global health and capacity building, says ending the freeze is absolutely the right move. “There is no justification whatsoever to deny visas to people who are from those countries. It’s counter-productive and has no particular value to Canada,” she said. Even if Canada wanted to be extremely cautious, officials could ask someone arriving from one of those countries to monitor their temperature for 21 days, but there’s no science-based reason for a full ban, she said.

Requiring a traveller to monitor their temperature “would at least have some logic to it because there is an incubation period of 21 days,” Yassi said. The freeze imposed by the Conservatives “was just political posturing because there’s really no public health value to it. ”

The possibility of quarantine measures remain in place for people showing symptoms of Ebola who enter Canada within 21 days of being in Guinea. Those travellers are required to identify themselves to border officials and undergo a medical exam to check for symptoms. The amended quarantine order will be in place until March 31, 2016, according to the notice.

Related: Canada’s visa ban is against the spirit of health regulations: WHO

Conservative immigration critic Michelle Rempel says the previous government’s response to the Ebola outbreak was prudent. “This was out of an abundance of caution given the severity of the epidemic,” Rempel told Maclean’s. “We sent a lot of aid, we sent the mobile hospitals, we were on the ground there right away and then of course we’ve been at the forefront of funding the discovery of one of the Ebola vaccines.”

“The WHO was supportive of our overall response,” Rempel said.

With Guinea being declared Ebola-free, the WHO says this is the first time all three countries have stopped the original transmission chains of the disease. Guinea was the first country hit by the outbreak back in March, 2014.

Global Affairs Canada, the federal department in charge of foreign affairs, trade and development, continues to advise against travel to Guinea, partly due to the Ebola outbreak.