Opposition forced to get creative in Liberals' East Coast stronghold

Opposition parties work to retain presence in Atlantic Canada, a region where the Liberals swept all 32 seats 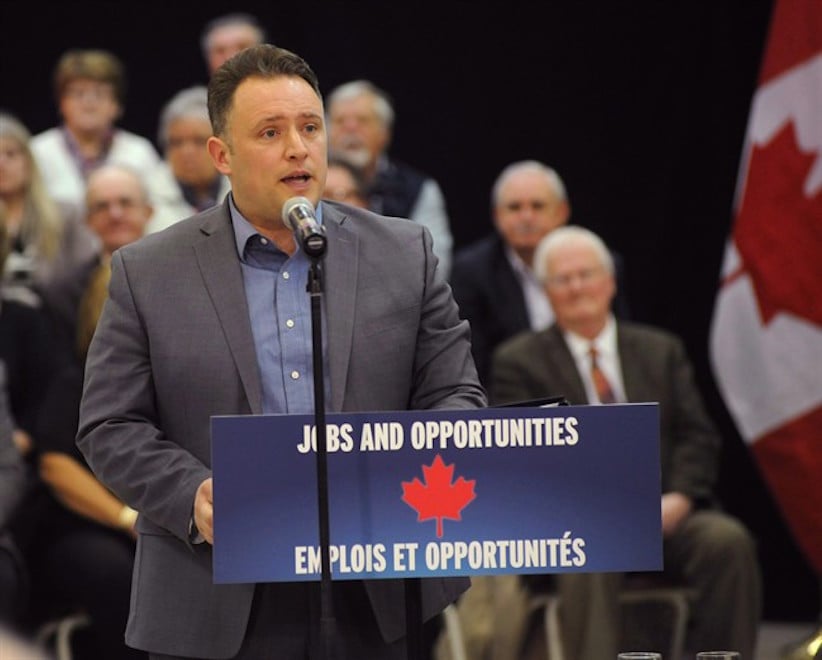 Rob Moore, minister of state for the Atlantic Canada Opportunities Agency, speaks at an event in Miramichi, N.B., on Thursday, April 2, 2015. Like any regular federal politician, former Conservative cabinet minister Moore is a busy man these days. THE CANADIAN PRESS/Stephen MacGillivray

Based in Saint John, N.B., he often travels to Ottawa to attend meetings of the Tory caucus and shadow cabinet. He keeps a close watch on issues affecting Atlantic Canadians, and he often meets with business people and conducts media interviews.

But Moore is no ordinary politician. In fact, he isn’t even a member of Parliament, even though he’s the Conservative critic for Atlantic Canada.

Like every other Conservative and New Democrat MP in the region, he was tossed out of office on Oct. 19 when Justin Trudeau’s Liberals won all 32 seats spread across the four provinces.

“The Atlantic region is hugely important to our party,” said Moore. “With the Liberals having a complete monopoly on the ridings … we don’t have a lot of constructive debate going on. I think (the Liberals) just look at that big block of red and they say, ‘We can take that region for granted.'”

Moore, the former minister responsible for the Atlantic Canada Opportunities Agency, now works full-time for the Conservative leader’s office, doing his part to keep the party connected with a region that has no opposition MPs.

While it’s true the Conservatives and New Democrats in Atlantic Canada were humbled by voters’ wholesale rejection of the parties last year, both opposition parties are already rebuilding for the next election.

The NDP, for example, has appointed Quebec MP Guy Caron to be their Atlantic watchdog — his eastern Quebec riding is adjacent to northwestern New Brunswick.

“We’re staying appraised of what is going on,” said Caron. “The issues of my riding are issues of Atlantic Canada.”

Caron said forestry, fisheries and employment insurance are among the common themes, and he’s quick to add that he has an extra assistant in Ottawa to help him with the Atlantic file.

As for the Conservatives, they have devised a so-called buddy system that has paired MPs from outside the region with Conservative riding associations across Atlantic Canada.

For example, Conservative MP Shannon Stubbs, who represents a riding in northern Alberta, has been paired with the riding of Cumberland-Colchester, which is in northern Nova Scotia.

“We really want to earn back the trust of Atlantic Canadians,” Ambrose said. “We think that they need a voice in opposition, and we want to be that voice … With four Liberal premiers and 32 Liberal MPs, we worry that the region will be taken for granted.”

As proof, he cites the apparent lack of Liberal enthusiasm for the Energy East pipeline project, which would bring about 1.1 million barrels of oil per day from Alberta and Saskatchewan to the marine terminal Saint John, N.B., if it’s approved.

And he’s quick to highlight the backlash that ensued in August when Trudeau would not commit to replacing a retiring Supreme Court of Canada justice from Nova Scotia with someone from the Atlantic region, in effect ignoring a 140-year-old constitutional convention.

Amid protest from Atlantic defence lawyers and academics, Trudeau stuck with the convention in October when he appointed a Newfoundlander to the bench — a first for that province.

“These guys had no intention of appointing someone from Atlantic Canada,” Ambrose said, adding that Tory MPs from across the country rallied behind the cause. “They got up (in the Commons) and they asked question after question to put pressure on the Liberals. In the end, we won … What it showed was that it matters to have an opposition.”

“The Liberals have got a majority government,” said McKenna, chairman of the political science department at the University of Prince Edward Island. “They don’t have to worry about what the Conservatives say right now. The push-back was internal, within the Liberal party ranks, and from the provincial premiers.”

In a rare show of open dissent, Nova Scotia Liberal MP Sean Fraser strayed from the party line on the Supreme Court issue in September, after the Conservatives tabled a motion accusing the 32 Liberal MPs of remaining silent. Fraser, the MP for Central Nova, told the Commons he supported the idea of having an Atlantic Canadian justice on the top court.

McKenna suggested each of the four Liberal premiers in the region also made their views known: “They … said, ‘No, that’s not going to fly.'”

McKenna said it’s also worth noting the NDP and the Tories aren’t the only ones struggling for traction on the East Coast.

With so many Liberals in the region, some backbenchers have virtually disappeared since the general election in October 2015, he said.

“The problem is that if you’re not in the cabinet, it’s difficult to get profile,” McKenna said.

“For some of these rookie MPs, who came in on the coattails of Justin Trudeau, it’s hard to carve out a name on the national stage.”