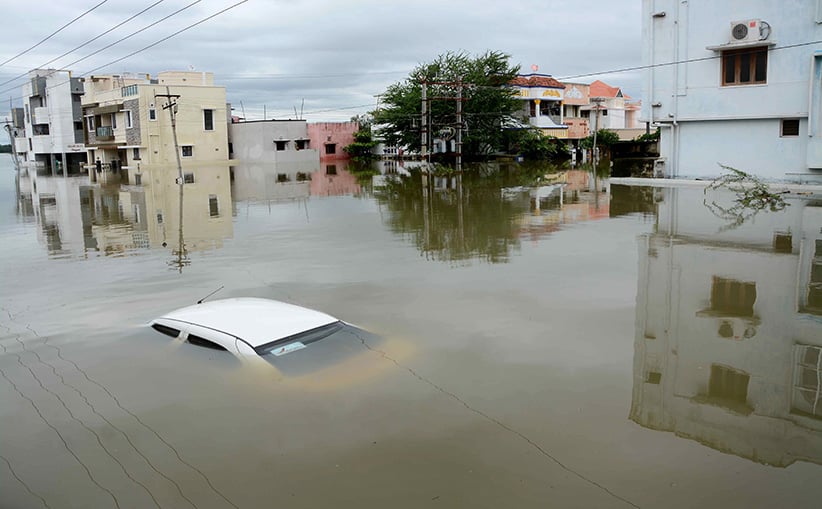 A car is submerged amidst water-logged houses in a rain-hit area of Chennai on November 17, 2015. India has deployed the army and air force to rescue flood-hit residents in the southern state of Tamil Nadu, where at least 71 people have died in around a week of torrential rains. (STR/AFP/Getty Images)

World leaders made sweeping pronouncements Monday, and environmentalists sounded more optimistic than they’ve been in years. But all the hopeful rhetoric and dire warnings about the imminent threat to the planet haven’t so far translated into progress at the Paris climate conference.

The group to watch at the talks is known as ADP—the abbreviation for a wonderfully bureaucratic UN-style name, the ad-hoc working group on the Durban platform for enhanced action. That group of officials is supposed to clean up the 54-page proposed agreement text by Saturday to get it in shape for higher-level officials to work off in the second week of talks. Plenty of lines in the text have bracketed phrases to indicate the negotiators can’t agree on them. But after two days of negotiations, they’ve actually added bracketed parts, not eliminated them, said Green Leader Elizabeth May, who is in Paris and watching the discussion.

At the core of these debates is the divide between rich and poor: generally, developed countries are responsible for the bulk of the greenhouse gas production that has warmed the world so far. Burning fossil fuels got them to where they are. But they tend to have smaller populations and are emitting less than some of the emerging economies with huge populations, like India and China. At the same time, the emerging economies are still building their industries and don’t want to give up a chance at the kind of growth that could put them on par with the developed world.

The first possible stumbling block in the negotiations is the question of financing for the world’s poorest countries, which are often the most affected by climate change but less able to afford to mitigate and adapt to the effects. At the Copenhagen conference in 2009, developed countries like Canada promised to provide a total of $100 billion a year to help with adaptation (Prime Minister Justin Trudeau followed through on that commitment last week when he promised $2.65 billion over five years). But the developed countries haven’t hit that target. And that pledge doesn’t deal with funding after 2020, so the poorer countries are looking for ongoing contributions.

A key question within that debate is how to deal with emerging economies like Singapore or Saudi Arabia, said Alex Doukas, a senior campaigner for Oil Change International, a group that wants to see less reliance on fossil fuels.

“What constitutes a country that should be on the hook for some of the poorer countries or some of the countries that are more vulnerable to the impacts of climate change?” he said. “There are some actors who need to be probably stepping up and playing a bit of a different role.”

The next possible stumbling block is the question of “ratcheting up” and periodic review where countries would re-evaluate their targets and increase their goals.

The U.S. and Brazil, among other countries, have set targets for 2025, five years after the Paris agreement kicks in. Others, including Canada, have just set a 2030 goal.

“I think there’s broad convergence around the notion that there absolutely do need to be successive rounds of contributions,” said Todd Stern, the U.S. envoy for climate change. “Otherwise we would be looking at a kind of one-off agreement. I think that’s not what people have in mind.”

An early debate centred around whether the targets should be binding. Most countries, including Canada, have given up on that since the Americans don’t think they could get a legally binding agreement through Congress. But, said John Drexhage, a former Canadian negotiator in Paris the EU, Russia and the small-island states still think it’s an important measure to follow the talks.

“Developing countries want to have legally binding for developed countries. They’ll never accept them for themselves,” said Drexhage, who is now a senior advisor to Coop Carbone, a Quebec group that advocates for green technology to cut emissions.

Finally, Canadian Environment Minister Catherine McKenna is among those pushing regular reporting and review of how countries are doing. But the idea of measurement, reporting and verification is tricky because China, one of the world’s big emitters, has never agreed to the kind of independent monitoring outlined in the proposed agreement.

It’s early in the talks, but the lack of progress is not a good sign for those who want an ambitious agreement to limit greenhouse gas emissions. Most observers seem to agree that there will be some kind of deal; the question is whether it will be good enough to keep the planet from overheating.