Nov. 6: As the 100th anniversary of the end of WWI approaches, the Liberals and Conservatives agree to back an NDP motion that should ensure veterans actually get the money earmarked for them 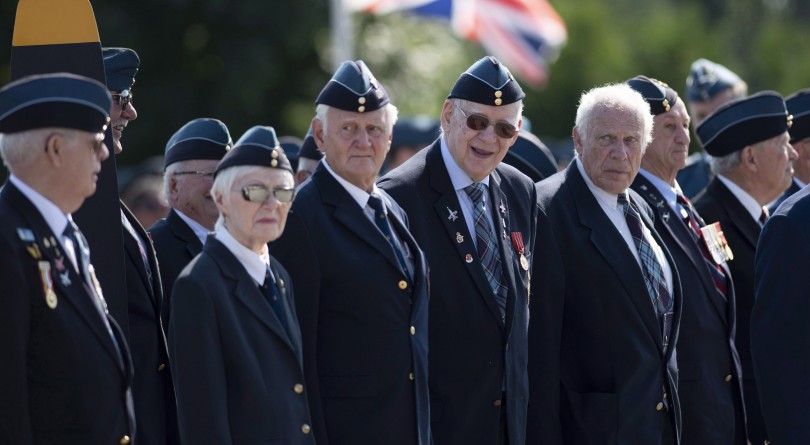 Veterans look on during a ceremony commemorating the Battle of Britain in Gatineau on Sunday, Sept. 16, 2018. THE CANADIAN PRESS/Justin Tang

Today is election day in America, and whatever the outcome the midterms have already broken ground by attracting the largest number of female candidates in history. From Stacey Abrams in Georgia to Abigail Spanberger in Virginia, here’s a look at some of the key races to watch where women are on the ballot:

In the House and Senate races, a record 262 women are still in the running; only 60 of them are Republicans. (Emily’s List, which recruits pro-choice Democratic women to politics, has signed up more than 42,000 women since the 2016 election.) In competitive races for the House—which the Democrats are widely expected to flip—the most common match-up is between a Democratic woman and a Republican man.

Thank the confluence of Hillary Clinton’s failed presidential bid, Donald Trump’s victory, the Women’s March, the #MeToo movement and a hyper-polarized nation for this historic moment when the overwhelmingly white man’s game of politics is likely to experience a dramatic makeover—not just in the image of more women, but in the image of more minorities, too. (Maclean’s)

If you’re planning to take in the results online, you have an abundance of options. FiveThirtyEight has an hour-by-hour rundown of what to watch for as the night unfolds. Multiple networks will be live stream their coverage, including CNN, MSNBC, Fox News and C-SPAN . CNN has a live results map. Oh, and that needle is back.

Between the Harper Conservatives and the Trudeau Liberals, governments in Ottawa have failed to spend more than $1.4 billion in money that had been earmarked for veterans. That practice could soon come to an end. The NDP tabled a motion requiring that any unspent money at year end be transferred to the following year’s budget for veterans. Both the Liberals and Conservatives said they’d support the motion. (Global News)

At the same time Ottawa fessed up to having shortchanged vets by at least $165 million in lost pension and disability payments from 2002 to 2010 due to an accounting error. The mistake impacted 272,000 veterans, of which 175,000 have since died. (CBC News)

This coming weekend Justin Trudeau will travel to France to mark the 100th anniversary of the end of the First World War. The Prime Ministers Office said Trudeau would visit the Vimy Ridge Memorial on Saturday and then the Armistice Day ceremonies in Paris the following day. (Canadian Press)

Writing in Maclean’s, Defence Minister Harjit Sajjan says its incumbent on Canadians to let soldiers and veterans know their sacrifices are not in vain:

When I think of Lt.-Col. William Hart-McHarg, Pte. Buckam Singh, and the many others who fought for Canada, I think of the horrors they faced. I also think about the thoughts that must have crossed their minds. I am certain that just like every soldier, they asked themselves: is my sacrifice worth it?

After a difficult day on the battlefield under unimaginable stress, or returning to camp without a fellow soldier, one cannot help but ask: is my sacrifice worth it? I have heard that question from those I served alongside in Bosnia and Afghanistan.
. . .
We can answer this question for them. One of the best ways we can honour the sacrifice of the women and men who have fought for us is to lead a meaningful and fulfilling life. We should all take time to savour the small things, and harness the opportunities we have been given to succeed. This also means contributing to our communities, and working hard to improve them to create better lives for the next generation. We each have unique talents, and by being the best versions of ourselves, we can show our veterans that their sacrifice was not in vain. (Maclean’s)

By the way, you can see information and records for the soldiers Sajjan mentioned here and here, as well as search the names of 66,000 other Canadians killed during WW1 as part of Maclean’s commemoration of the end of that conflict. (Maclean’s)

In the market for a used car or truck? The RCMP might have what you’re looking for. The National Post reports the force is trying to unload most of the 600 brand new vehicles it bought for the G7 summit earlier this year at a cost of $23 million. (National Post)