Will the finance minister step down? Now that the opposition has made a demand, one of Parliament's most relentless traditions begins. 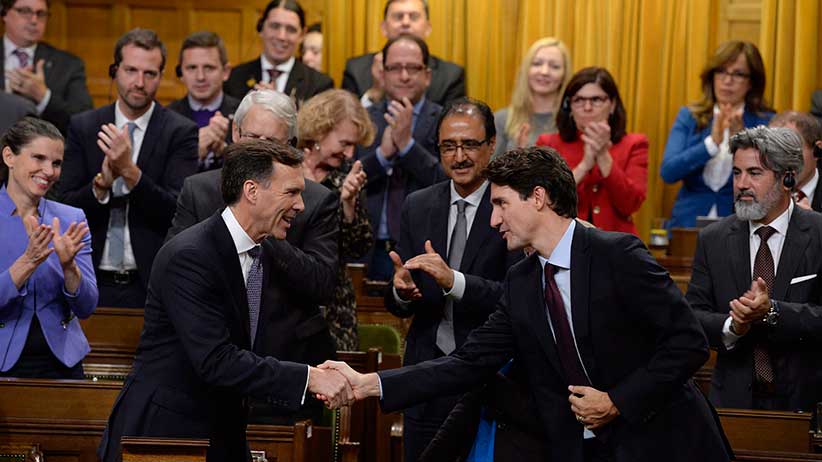 Minister of finance, beware the case of the rancid tuna. In 1985, the opposition Liberals started calling for the resignation of cabinet minister John Fraser, minister of fisheries and oceans, who approved the sale of more than a million cans of spoiled tuna to protect east coast jobs. The fish was unfit for human consumption, and the opposition claimed Fraser was unfit for office. “Tunagate” spilled pressure onto former prime minister Brian Mulroney, and the opposition did not rest until Fraser resigned.

“You get a minister on the run, and you continue to campaign, adopt a siege mentality, and go after that like some wounded animal you’re hunting down,” says Paul Thomas, a professor emeritus of political science at the University of Manitoba. “Some call it a bloodsport.”

Bill Morneau’s assets are not tuna, and he likely won’t surrender, but the Conservative crusade for a resignation will serve their motives anyway. On Nov. 29, opposition leader Andrew Scheer called for Morneau to resign after learning that someone sold 680,000 shares of Morneau Shepell in November 2015, shortly before the government introduced tax rate changes that could possibly affect the company’s share price. The Tories suggest it might have been Morneau. On Nov. 30, Global News reported that Morneau’s father sold 200,000 shares in the company in the two weeks leading up to the tax announcement.

Morneau has called these allegations “absurd” and reportedly said in the House of Commons, “What we’re hearing now is in my mind [an] absolutely crazy idea that something that we campaigned on, that we talked to 36 million Canadians about, which was a rise in taxes in the top one per cent, was somehow knowledge that was only my knowledge.”

Scheer and his finance critic, Pierre Poilievre, pose to repeat relentless demands for resignation, a political tactic that could fatigue the already besieged minister or spark a lawsuit that would threaten Liberal votes (Morneau suggested he would sue Poilievre for defamation). This crusade could serve to derail the government’s agenda, and Morneau’s alleged behaviour on the Toronto Stock Exchange could down the road spark a Trudeau staff exchange if he intolerably burdens the boss.

“You don’t give up a finance minister because there are howls from the opposition bench that he or she should resign,” says Thomas. “You make a hard-headed calculation: at what point does the finance minister become more of a liability than an asset?” Thomas says Trudeau won’t give into Conservative requests “because in some ways, he’s saying if you can maintain your challenge day in and day out, you can convince the Prime Minister that maybe the finance minister’s time is up.”

In the rare resignations of past Canadian ministers, the opposition has driven them out for both personal failings and job performance. After Bev Oda billed taxpayers for a $16 glass of orange juice, her most infamous travel expense, she resigned as Stephen Harper’s international cooperation minister in 2012. Francis Fox stepped down from Pierre Trudeau’s cabinet after forging the signature of his girlfriend’s husband so she could get an abortion, and Maxime Bernier resigned in 2008 after sources said he left confidential documents (for a NATO summit in Romania) lying around at his girlfriend’s house.

The Morneau gun is not smoking, but rather emitting consistent puffs. He didn’t recuse himself from Bombardier discussions that the opposition says pose conflict of interest; he failed to disclose to the ethics commissioner a company that owns a villa in France, and most recently, Scheer accuses Morneau of using government intelligence to make shrewd family business moves. Scheer told reporters Wednesday, “The finance minister isn’t competent, and he can’t follow the rules, so why is he still in cabinet?”

In the House of Commons, Scheer double-teamed with his finance critic, resembling opposition attacks on Conservative John Fraser over the cans of Star-Kist tuna. “It was the same thing as they’re doing here, just weeks and weeks of questioning,” says Gary Levy, former editor of the Canadian Parliamentary Review. “It happens once or twice in every Parliament.”

It happened last April, when the Conservatives called for the resignation of Defence Minister Harjit Sajjan, after he over-attributed himself as the “architect” of an operation in Afghanistan. The Tories eventually gave up after Sajjan said sorry, but Morneau is stubbornly unapologetic, and the Tories could be saving more pointed questions for the new year so that the controversy doesn’t disappear over the holidays. “It could be a kind of game they’re playing,” says Levy, “that they have some information that they’re just sitting on for a week or two” and then “they’ll spring it out.”

Question periods now become deja-vu as the same shots fire between the same names. Another Paul Thomas, who is also a political scientist but at Carleton University, explains, “every day they’re talking about this, the government is thrown off from its agenda.” For the Tories, “in some ways, the resignation would be a nice cherry on top of the cake.”

Neither Thomases expect an obvious resolution from Conflict of Interest and Ethics Commissioner Mary Dawson, who “has suddenly had this very hot potato thrown at her, and she has to try to get to the bottom of it,” says Thomas of the University of Manitoba. If she doesn’t conclude this case, she’ll prove “she doesn’t bark very loudly, and certainly doesn’t bite very often.”

Ethics aside, Morneau shows promising work ethic. The Canadian economy grew three per cent this year, on track to become the strongest economy among G7 countries, and the Prime Minister could sabotage his support from Bay Street if he replaced Morneau. The Liberal caucus doesn’t hold any other clear candidates for the job, other than perhaps Ralph Goodale who is already needed as a stronghold on cannabis legalization, and Trudeau wouldn’t want to appoint an interim finance minister until the next election; as Thomas of Carleton University explains, “it’s not a job for caretakers.”

But Morneau may soon need to take care of a lawsuit. The opposition holds parliamentary privilege inside the House of Commons, protecting them from certain charges of defamation or libel when insinuating Morneau abused his ministerial power, but Poilievre suggested he take the questions outside the House if Morneau won’t reveal whether or not he was the one who sold the 680,000 shares shortly before the tax change.

Even if Morneau wins the lawsuit, “it could be possible for them to lose in public opinion because it could be seen somehow as trying to stifle freedom of speech in Parliament,” says Thomas at Carleton.

And even if Morneau wanted to step down, the Prime Minister would likely talk to him about a latent goodbye rather than reactionary escape. “I’m sure if there’s considerations of resignation, it would involve a fireside chat,” says Thomas in Manitoba.

In all cases, Morneau will require a complexion tougher than skin. Scales might do.