Ottawa has no definition for the middle class, says Ottawa

Politics Insider for Jan. 29: We learn how many bureaucrats are overpaid, how much the feds spent fighting Mark Norman and why Russian tunes ring out from the Peace Tower 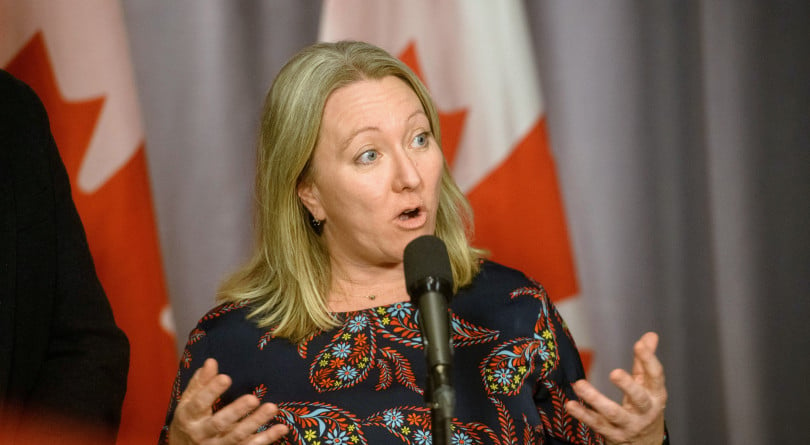 Minister of Middle Class Prosperity Mona Fortier speaks to media during the Liberal cabinet retreat at the Fairmont Hotel in Winnipeg on Jan. 19. (Mike Sudoma/CP)

A new Angus Reid poll on the Trans Mountain pipeline reveals the typical regional cleavages—huge support in Alberta and Saskatchewan, robust opposition in Quebec, modest support elsewhere—but also pinpoints the most divided subsections of Canada. Liberal voters, for example, are split 48-43, with supporters gaining the edge. Young people between 18 and 34 are divided, too. The male split is 56-43 in favour, while the female split is 50-36 against.

Overpaid: In a written question on the parliamentary order paper, Conservative MP Kerry Diotte asked the feds to disclose how many public servants were overpaid as a result of the Phoenix pay debacle. The answer was that 98,249 bureaucrats “potentially” owe money back. The median overpayment balance: $1,383.

The parliamentary budget officer crunched the numbers on the Liberals’ promised middle-class tax cut. The savings weren’t supposed to flow to wealthy taxpayers. Indeed, Yves Giroux found that Canadians who earn between $51,510 and $103,017 will save $337 a year. But Canadians who earn up to $159,695 save $10 more than that. And those who earn up to $227,504 will still save $257.

What is the middle class, anyway? Another written question, this one from Tory MP Pat Kelly, who asked Mona Fortier, the minister for middle class prosperity, how many people the government considers part of her portfolio. Fortier was raked over the coals the day after her appointment when she tried to answer a similar question on the radio. Fortier’s official response to her Conservative questioner: “Canada has no official statistical measure of what constitutes the middle class.”

The Canadian Press dug into the same written questions and found an eyebrow-raising number: the feds spent at least $1.4 million fighting Mark Norman, the retired vice-admiral who once commanded the Royal Canadian Navy, in a failed effort to prosecute alleged leaks of confidential information.

Have an opinion about the CBC? Of course you do. The CRTC is extending a public consultation on CBC programming as the public broadcaster seeks a renewal of its license. The regulator’s goal is to “ensure that the content produced and distributed by the public broadcaster reflects the diversity of Canada’s population.” Imagine the, er, colourful submissions from across the land.

The CBC’s newly named chief political correspondent, Rosemary Barton, took a side in the national water cooler debate about bilingual party leaders (spoiler alert: she says two languages aren’t too many to learn). Barton cited a 2016 poll that said 86 per cent of Canadians believe the PM should be bilingual. Having two solitudes is, of course, never easy. A poll from last July, recently published online by the feds, drilled down into minority language communities in Canada. Vox Pop Labs found that English-speaking Quebecers tended to feel more alienated than Francophones outside Quebec. [The full report]

The bilingualism debate is as layered as they come in Canada. Rob Gillezeau, an NDP economist when Tom Mulcair was leader, tweetstormed about the role class plays in language development. “A civil service job is, for many bright students from low income families, a path out of poverty,” he wrote. “But differential access to French education can end up acting as a glass ceiling for advancement.”

Walk across Parliament Hill at noon today and you’ll hear Dominion Carillonneur Andrea McCrady‘s daily show on the Peace Tower’s bells. Her 15-minute program includes tunes like Moscow Nights, Down the Mother Volga and The Ural Rowan Tree. So have the Russians taken over Centre Block, or what? McCrady tells Maclean’s that she composes hour-long summertime programs, and today’s teaser is a “building block” for a longer show with a northern hemisphere theme.