In Ottawa's race to the middle, Liberals are way ahead

From civil liberties to the environment, NATO and deficit spending, the opposition parties can't wrestle the middle away from the government 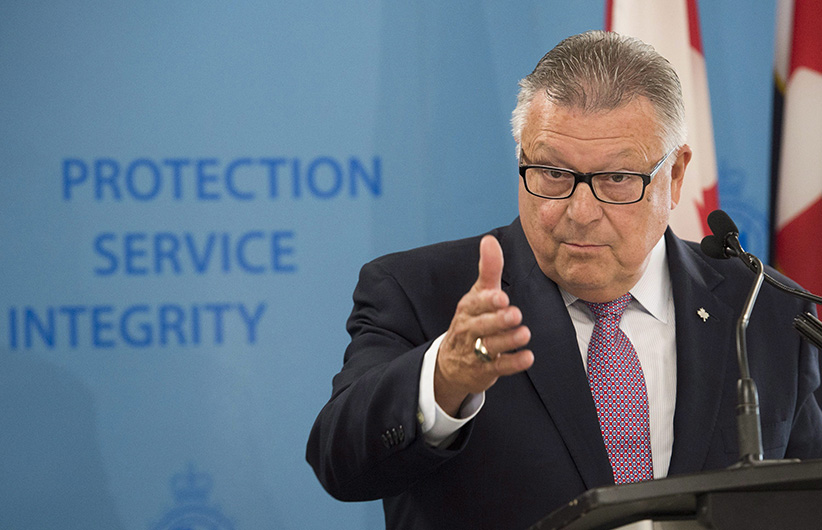 Minister of Public Safety and Emergency Preparedness Ralph Goodale makes a funding announcement during a visit to an immigrant holding centre in Laval, Que., Monday, August 15, 2016. Immigration holding facilities in Vancouver and Laval, Que., will be replaced as part of a $138-million overhaul intended to improve detention conditions for newcomers to Canada. (Graham Hughes/CP)

Minutes after the RCMP played a chilling video showing the black-clad, 24-year-old Aaron Driver pledging allegiance to ISIS, I spoke to his father, Wayne. By that time, his son had already detonated a homemade explosive device and died in a gunfire exchange with police. Wayne hadn’t seen the video before that moment, and he was reeling. “I didn’t have any thoughts, I just broke down crying,” he said. “Disbelief and shock set in right away and the more you listen, the more you look, you realize it’s your son, and, my God, what brought him this far? What could we have done differently to help him?”

If Wayne Driver is understandably bewildered by these questions, so too are most political leaders. Security, civil liberties and the war with radical Islam pose some of the defining questions of our times, but the answers are getting less clear. In the U.S., Donald Trump has turned them into a paranoid, ad-lib form of Republicanism, his latest idea being “extreme, extreme vetting” of immigrants. It’s like Trump has put the old PQ charter of values into a blender, super-sized it, and then chugged it down in front of the cameras. Here in Canada, the Liberal government is still trying to figure out its final position on Bill C-51, the controversial anti-terror law Stephen Harper passed, while the Conservatives and the NDP are both in the midst of full-blown identity crises—OK, let’s use the preferred euphemism, “leadership races”—so right now it’s hard to say what either actually believes in.

Speaking with the Public Safety Minister Ralph Goodale this week, I got the sense that not a lot of substance will actually change. There will be parliamentary oversight of the security intelligence review committee, a few definitional changes to ensure civil disobedience is not criminalized, tweaks to the no-fly list, money for deradicalization programs and . . . that’s it. The more controversial issues, like dealing with the lower threshold for issuing a peace bond, will probably remain unchanged.

It is telling that the Liberals are no longer worried about the politics of the security issue. The mealy-mouthed position they took on Bill C-51 while in opposition—voting for it while promising to change it if elected—is actually paying off. They can now drift into the middle ground like some implacable Star Trek character, the Borg of Liberal Pragmatism, simultaneously absorbing the Conservatives’ core issue of security and the NDP’s stand for civil liberties. They’ve done it on all sorts of files, from the environment to NATO to deficit spending. It’s driving the other two parties nuts.

Desperate to ignite interest in their tepid leadership races, both opposition parties are searching for defining issues, but ones that don’t cede the political middle ground to the Liberals.

The NDP is dealing with the Avi Lewis-Naomi Klein inspired Leap Manifesto, which is a genuinely idealistic document about the economy, the environment and First Nations, and the closest thing we’ve seen in Canada to the Bernie Sanders movement. Young people like it. If Avi Lewis polishes his French and decides to enter the moribund NDP leadership contest, it would jolt the party back to life. Still, it’s high risk. The Leap Manifesto is the type of document that can define a protest movement, but ruin a political party, a kind of progressive Thelma and Louise road trip that is exhilarating and affirming, but ends up careening the NDP off a cliff.

RELATED: The NDP’s hard-left turn into an existential crisis

Meanwhile, the Conservatives are in the “shelter in place” position until the Donald Trump movement burns itself out. If it does. They have the double challenge of distancing themselves from Trump’s whiplash nativism while trying to warm up Stephen Harper’s ice-blue Reformism. The security issue was once an easy point of orientation, but the Liberals have taken that back. By tripling the boots on the ground in Iraq, putting up to 500 soldiers in Latvia to face off against Russia and now preparing to put a UN force in Africa, it’s getting hard for Conservatives to call the Liberals a bunch of appeasing wimps. Soon they are going have to complain about military overstretch. That will be a back flip.

If they get co-opted on security, the CPC will inevitably tack back to their core issue, the economy. That’s doesn’t give them a clear runway either. Conservatives still have to explain why stimulating a slow economy with deficit spending was good when they did it, but bad when Liberals do it. They don’t have a Leap Manifesto to deal with, but Maxime Bernier is proving to be a genuine disrupter. Pollsters and pundits may laugh at his long-shot-idea campaign, but Bernier promises to abolish supply management, privatize airports and lift foreign restrictions on all sorts of industries like telecoms. Conservative campaign manager Nick Kouvalis has pointed out that Bernier used to happily accept government pork for local industries, the kind of corporate welfare he now rails against, but at least Bernier has fresh ideas.

Political parties need to have coherent answers to difficult, even painful questions, the kind being asked by Wayne Driver about his son’s dark journey toward radicalism. It’s too early to say what the Conservatives and the NDP will stand for in the future, but they have to find a way to avoid being pushed to the fringes by a government that is only too happy to snap up their best ideas and paint them red.