Shootings. Gropings. Abuse of the public trust. How can we keep trudging through federal politics’ fog of despair? 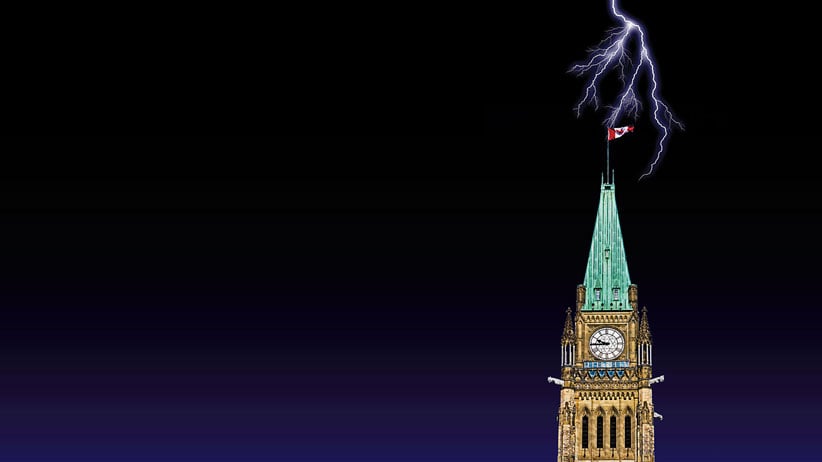 An old boss of mine once told me there are times when the country speaks to Ottawa and times when Ottawa speaks to the country. It’s a handy way to think about the broad sweep of events: on one hand, the extended periods—sometimes lasting for years—when Canada’s government seems to be a fount of ideas and energy; on the other hand, the periods when it’s scrambling just to keep up.

Handy, but not useful right now. This month, truth be told, the teeming multipartisan colony on a hill can spare no energy either to lead or to follow. This month, the capital is, in a word, heartsick. To understand the cloud of gloom that has settled over Ottawa and will not leave soon, consider the events of Wednesday, Nov. 5.

The day began with two Liberal MPs, Massimo Pacetti and Scott Andrews, getting kicked out of the party’s parliamentary caucus. The two men are also forbidden from running for the Liberals in the election expected next year. What did they do? “Serious personal misconduct,” their former leader, Justin Trudeau, told reporters. For details, news organizations had to rely on leaked rumours from anonymous sources about who told head-spinning tales that included allegations of sexual harassment against two NDP MPs.

Pacetti and Andrews deny any misconduct. Meanwhile, and perhaps surprisingly, the NDP is furious at Trudeau for ejecting the two men from the Liberal caucus. There was no warning, New Democrats say. Trudeau has “re-victimized” the MPs by acting on their accusations in such a public way. Instead, he should have dedicated himself to enforcing an indefinite cordon sanitaire between two of his MPs and two of his opponents’, ensuring no contact between people who spend part of every day working a few metres apart. Shaky ground on which to base claims of moral superiority, but the NDP was up to the challenge.

But back to Nov. 5. The day ended, or, at any rate, it ran out of ways to torment Canadians any further, when Dean Del Mastro’s Conservative colleagues and a few from the other parties stood to applaud him after he resigned his seat as the member of Parliament for Peterborough, Ont. A judge had found Del Mastro guilty of three counts of violating the Canada Elections Act for spending way over the authorized limit in the 2008 federal election.

Del Mastro’s resignation saves his pension, which would have been jeopardized if it had fallen to MPs to suspend him from the House. His resignation speech, a cornball classic of folksy hometown charm, seemed predicated on the assumption that if a guy’s got a heart as big as all outdoors, then, golly, it’s just wrong to ask for his receipts. He, too, will not be allowed to run as a candidate for his preferred party in the next election.

But even a day that began with whispered innuendo and ended with stentorian bravado cannot explain the fog of despair through which many residents of Ottawa’s political precincts trudge these days. What’s got the capital down is that Nov. 5 wasn’t even the worst day we’ve had lately. That would be Oct. 22, the day Michael Zehaf-Bibeau shot the unarmed Cpl. Nathan Cirillo to death before forcing his way into Centre Block, where it became the deeply troubled would-be terrorist’s turn to die in a hail of bullets.

Zehaf-Bibeau’s attack locked down Ottawa’s downtown core for hours, left tens of thousands of people anxiously calling and texting their loved ones to ensure they were all right, and frayed nerves down to stubs. It sparked a few days’ debate over the nature of the word “terrorism” and the extent to which Canada had lost its innocence. Which led, in turn, to some discussion about whether Canada could still, at this late date, be accused of having any innocence left to lose. Mostly, it just shocked and saddened everyone.

Nor did Nov. 5 mark any kind of end to the depressing news. On Nov. 7, a former staffer to NDP MP Sylvain Chicoine ﬁled a lawsuit that alleged he ignored harassment against her by another staffer, sided with the other fellow, and ﬁred her when she complained about the toxic work environment. Chicoine is staying in the NDP caucus. Perhaps that’s better than kicking him out on a single accuser’s say-so. It’s kind of hard to tell.

Each of these cases sends slimy tentacles of memory and association back and forward in time. Del Mastro and a judge’s finding of election spending abuse? That’s reminiscent of Federal Court Judge Richard Mosley’s 2013 ruling, in the so-called “robocalls” case, that “there was an orchestrated effort to suppress votes during the 2011 election campaign by a person or persons with access to the [Conservative party’s] CIMS database.” Mosley could not ascertain who that person or those persons were. The Conservatives have been mightily sanguine about the news that their prized database was being used in an attempt to suppress the votes.

Suspensions from caucus remind us of the Senate. Four senators—the former Liberal Mac Harb and the former Conservatives Patrick Brazeau, Pamela Wallin and Mike Duffy—have been suspended, ﬁrst from their party caucuses and then from their Senate roles altogether, as allegations of spending abuse piled up. Each will get a hearing in court. Duffy’s will stretch through much of next year. Some day, nobody knows when, the auditor general will release details of an investigation into every other senator’s expenses. That’ll be another banner day in the capital.

In apparent acknowledgment of the revulsion the Senate inspires, Trudeau earlier this year announced he was kicking every Liberal senator out of the party’s weekly caucus meetings. Prime Minister Stephen Harper has allowed vacancies in the upper chamber to pile up, 14 so far, 17 by year’s end, or more, if more senators quit in disgust before their retirement date, as a steady trickle of them have been doing. Some people used to hope the Senate could simply be shut down. The Supreme Court says that would be so complex as to be impossible as a practical matter. Nor is it an option to simply let the lot of them age out and retire: The Constitution requires a Senate for much of our legislative system to work and, as soon as it became clear that attrition was any prime minister’s strategy for abolition, the Court would order him to smarten up.

Related:
Bluffer’s guide: What did Justin Trudeau do to the Senate?
Why the red chamber won’t die from simple neglect

Sexual harassment? Beyond the sleazy gropings and come-ons that have made this town a suffocating and sometimes harrowing work environment for too many young staffers, there is at least one frankly terrifying recent case: that of Robert Meinzer, a former aide to Liberal Sen. Art Eggleton, who was jailed in 2011 after pleading guilty to violent sexual assault against two women, one in Toronto and one in Ottawa.

A poll from David Herle at Toronto’s Gandalf Group—released, coincidentally, on the day Pacetti, Andrews and Del Mastro met their assorted comeuppances—found that among several occupations, politicians, political staff and lobbyists were considered least likely by respondents to behave ethically—far less likely than union leaders, CEOs and journalists. Respondents “generally reject the idea that either the media or opposing parties make scandals seem worse than they are.” Sixty-three per cent agreed with the proposition that “politics has a tendency to corrupt otherwise honest people.”

There are times when such jaundiced perceptions would seem worth rejecting. This isn’t one of them.