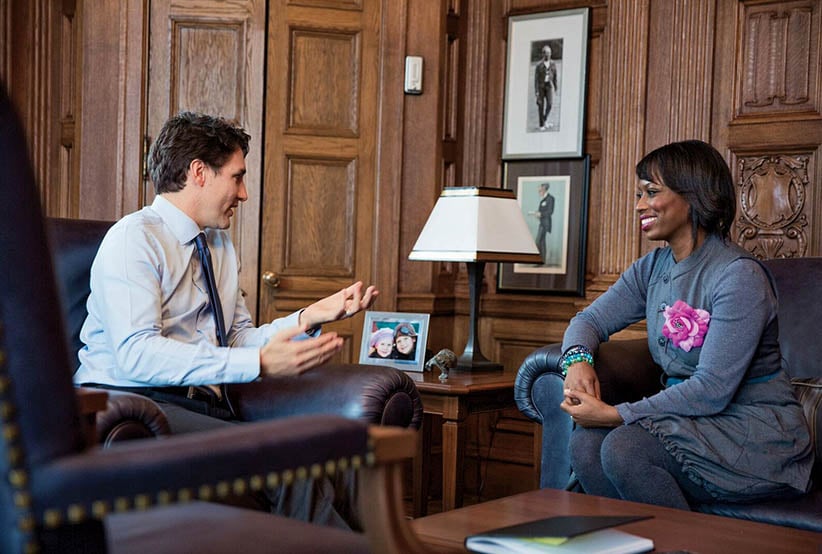 Celina Caesar-Chavannes returned to her new Parliament Hill office feeling a jumble of emotions. She had just been sworn in as parliamentary secretary to Prime Minister Justin Trudeau, a role that would build on a valued professional relationship. But after closing the door and sitting down behind her huge wooden desk, the health consultant with two M.B.A.s found herself in tears over the idea of taking more time away from her kids. “Who does this?” she thought. “Who leaves their kids for half the year [to be an MP]? And now I’m parliamentary secretary to the Prime Minister and I’m never going to see them!”

That feeling of guilt will be familiar to parents of either sex, never mind those clocking in and out of marble-floored legislatures. But when it comes to convincing women to take the plunge into the shark tank of politics, the impact on family is one of the most oft-quoted concerns. It’s also one of the reasons Canada still ranks below countries like South Africa, Sudan and Afghanistan in the number of female legislators.

But it is far from the only reason, nor is it the biggest one. “Women often think that they aren’t qualified, and then some 19-year-old guy calls you to be like, ‘Hey I’m ready,’ ” federal NDP president Rebecca Blaikie told Maclean’s. “I probably end up approaching at least 30 women for every man.” It’s a problem that plagues party recruiters: the most common reason women say no is they don’t feel qualified for a job that has no official description.

That’s a tough barrier to get around, and it’s easier to gloss over than to fix. When Trudeau was asked to explain why he committed to building a cabinet that’s half women, he could have explained how our modern democracy is massively unequal when it comes to the people who govern it, and that it’s time to show women they belong in government. Instead, his response was brief, verging on dismissive. To repurpose Trudeau’s phrase: Why, even though it’s 2015, do women occupy only 26 per cent of seats in the House of Commons? That’s an increase of a single percentage point over the number elected in 2011. At this rate, it will take another 24 elections—or 96 years—to hit parity.

The House won’t reﬂect the Canadian population if most parties aren’t offering candidates that do just that, and most parties simply haven’t figured out a way to woo meaningful numbers of women candidates. In the 2015 federal election, the NDP did the best job, with women as 43 per cent of its candidates. The Liberals followed at 31 per cent and the Conservatives trailed at 20 per cent. The Tories have no official policy to assist women who want to run for office, but they have had some success with mentoring—and they’ve got a roster of impressive women fronting the Opposition benches, including interim leader Rona Ambrose, finance critic Lisa Raitt and immigration critic Michelle Rempel. Showcasing those accomplished women is the visual response to Trudeau’s splashy cabinet parity pledge. The NDP require their riding associations to seek out visible minority and female nomination candidates, putting the onus on them to look to their communities rather than waiting for candidates to approach.

The Liberals are trying harder to find women for their team, including asking members to recommend would-be candidates. Caesar-Chavannes answered that “invite her to run” call. She lost a 2014 by-election in Whitby, Ont., then ran again in 2015 and won the seat.

Party officials who recruit candidates say women need to be asked up to five times before agreeing to run, whereas men will often agree without hesitating. That’s not to say men with families don’t feel the stress once they’re in office: there’s a long list of male MPs whose marriages crumbled, who moved their families to Ottawa to make it work, or who quit politics to try to save their personal relationships. Caesar-Chavannes says she feels a constant tension between the need to be at community events or knocking on doors in her riding, and spending time with her three kids. Her brain goes into overdrive wondering if she’s selfish for trying to be a politician, but she also knows the answer. “It’s not selfish. If you don’t do it, somebody else is going to do it, someone who doesn’t have as much passion.”

The Liberals have promised to make Parliament more family-friendly by eliminating Friday sittings to let MPs spend more time in their ridings, as well as holding votes earlier in the day rather than the evenings.

Over time, these updates might help. So will generational change. Despite frustratingly slow progress so far, Blaikie says more confident Gen X and Millennial women are easier to convince to run — much like Caesar-Chavannes, who says she knows she’s the right person for the job. “The younger they are, the less likely they are to feel that sense of a lack of qualifications,” Blaikie said. Is that because it’s 2015? Perhaps. Either way, it’s about time.