First of all, apologies for the delay in posting the promised graphic — it turns out that my spreadsheet skillz are somewhat less mad than I realized, and it took for-bleeding-ever to figure out how to make Google Docs do my math homework. Then WordPress was unwilling to accept the code to embed the data in a blog post, at which point the HTML export function stubbornly refused to preserve my meticulously-crafted colour scheme, which meant converting it into JPG format, and … yeah. I’ll spare y’all the rest of the gory details and give you the final version of the Election Financing Graph That Ate My Brain: 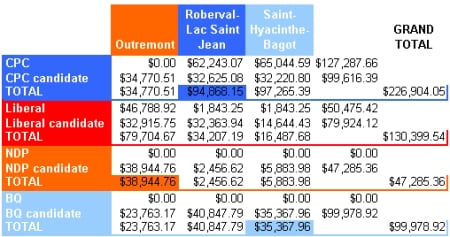 Note: These numbers represent advertising expenses only, and were calculated using party and candidate returns.

UPDATE: Also, now actually using the right numbers, which (luckily) didn’t change the overall trends in spending between parties and ridings terribly much, so my original analysis wasn’t completely off. (Thanks to the Jurist for noting my incredibly silly error.)

So, what can we learn by reading the (by)electoral entrails? A few things, actually:

Taking into account spending by both candidate and party, the Conservatives spent nearly twice and three times as much as the Liberals and Bloc Quebecois respectively, although at least in their case, they did manage to snag a seat that had previously been held by a rival party.

Interestingly, Saint-Hyacinthe-Bagot — where the Tory candidate lost, but increased his party’s share of the vote by a decent margin — cost the party more money than Roberval, which it won. As for Outremont, they seem to have decided early on in the campaign to leave that race to the Liberals and the NDP, which allowed the party to concentrate on the two ridings where the Conservatives had a chance of unseating the Bloc.

As for the Liberals, not surprisingly the party blew virtually its entire advertising allotment in Outremont — more than $75 $46 K total, compared to less than $4,000 in the other two ridings combined, which is more than ten four times as much as the zero dollars that the NDP, as a party, paid for Thomas Mulchair’s eventual victory. As for the candidates, they spent the limit in both Outremont and Roberval, but less than half that in Saint-Hyacinthe.

Meanwhile, the NDP scrupulously divided its party expense limit pie equally amongst all three ridings – okay, an extra dime for Roberval – with not a cent going to advertising. In fact, the only race in which the candidate spent up to the limit was, not surprisingly, Outremont.

Finally, the Bloc Quebecois didn’t fork out a cent of party money, which makes Saint-Hyacinthe the most affordable seat of all three ridings, although they did end up losing Roberval to the Conservatives, despite the fact that their candidate had the highest advertising expenses of any of the three Bloc hopefuls.

Based on these numbers, ITQ is ready to make the following prediction: