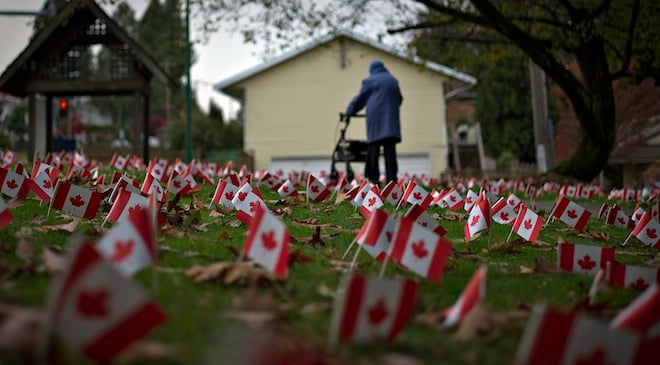 Canadian flags in honour of Remembrance Day cover the property of a seniors home in Burnaby, British Columbia. REUTERS/Andy Clark

OTTAWA – Veterans Affairs under-spent its budget by $200 million last year, raising questions about the Liberal government’s plan to pump even more cash into a system that seems perpetually unable to get money out the door.

The figures are contained in the latest plans and priority report for the federal budget year that ended last March, which shows many of the federal government’s marquee disability and entitlement programs had surpluses of tens of millions of dollars.

Janice Summerby, a spokeswoman, says it is largest difference between planned and actual spending at the veterans department in the last decade.

The Conservatives, while they were in power, were accused by the Liberals and New Democrats of deliberately under-spending at the same department — to the tune of $1.13 billion over seven years — in an attempt to balance the budget on the backs on veterans, an assertion the Harper government denied.

The last election campaign saw the Liberals promise to spend an additional $300 million a year to improve benefits and support, including a return to life-long pensions, as opposed to lump-sum injury compensation payments.

The department’s report says the current pot of unspent funds is the result of veterans not taking advantage of available benefits, and adds it’s difficult to forecast how many will actually apply.

Summerby added the difference between planned and actual spending has no impact on the level of care and support.

All of the lapsed funds were returned to the federal treasury.

Andrew Bernardo, who served as a policy adviser under the Conservatives, said one of the most frustrating aspects of that party’s tenure was an absence of data to make informed decisions within Veterans Affairs, particularly on rehabilitation programs.

The minister’s office was often “as blind as a bat” when it came to being able to assess and benchmark programs, he said.

“This isn’t just a systemic issue with Veterans Affairs, but it is across the board,” said Bernardo, who emphasized his comments are not intended to be partisan. He said he takes the Liberals at their word that they’re looking for good ideas from across the political spectrum.

“Government is getting better at it, but yeah, it is surprising and what it means is the minister of veterans affairs and the defence minister, no matter how well intentioned — if you don’t have those figures, it is very difficult.”

Writing a blank cheque for veterans is not going to guarantee improved services, warned Bernardo, adding that he doesn’t believe the Liberals fully appreciate how difficult it’s going to be to push an extra $300 million through the system, nor its impact on the bottom line.

Under the government’s accrual accounting system, the full cost of some of the programs — particularly pensions — will have to be booked up front in the year they are announced.

That, said Bernardo, will drive up the federal deficit.

He said he believes there are several common sense things the government can do that will make the lives of veterans better without breaking the bank.

Among the ideas is a proposal to combine the offices of the veterans and Canadian Forces ombudsman.

Bernardo says Guy Parent and Gary Walbourne should be locked in a room together until they come up with a plan to combine their functions and mandates because they essentially serve the same constituency.

Another proposal involves allowing the Canadian Forces surgeon general to decide whether a soldier’s injury is attributable to service — a hugely controversial issue within the veterans community.

At the moment, both National Defence and Veterans Affairs have their own systems. Ex-soldiers have, in some cases, been denied benefits for injuries that got them kicked out of the military in the first place.

Bernardo says giving the surgeon general the last word would conceivably eliminate a whole bureaucracy that has been geared to handling appeals, smoothing the way for veterans to get their benefits faster.