Parliament: An old man yelling at clouds, because real influence is hard

Paul Wells: Here in the nation’s capital, land of performative petitioning, we are all about letting everyone know how everyone feels 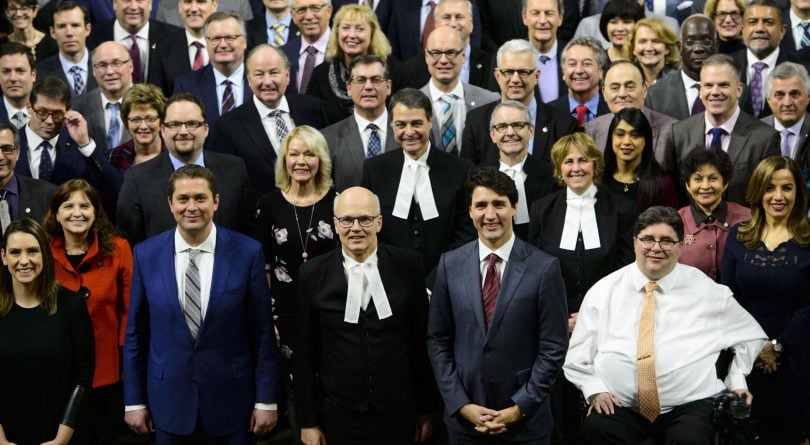 Members of Parliament in the temporary House of Commons in the West Block of Parliament Hill in Ottawa on Jan. 30, 2019. (Sean Kilpatrick/CP)

The last week of January was a bad week for the representations of things. The things themselves continued on as always, but Canadian politicians spent a lot of time venting about the things’ names. The way they’re depicted. Their virtual existence.

MPs returned from their long Christmas break to a new season of business in the House of Commons. By the end of the year, dozens of them won’t be MPs anymore. There’s an election in October. Just the thought of it is giving them the jitters. They have been aiming their frustration not at the world itself, but at names and images.

Andrew Scheer complained on Twitter that a Google search for “Canadian soldiers” turned up an image of Omar Khadr, who was imprisoned for a decade in the murder of U.S. Army Sgt. Christopher Speer. He’s “a convicted terrorist who murdered a medic and blinded another,” Scheer tweeted. “He is not a victim, nor should he be portrayed in this way alongside Canadian heroes.”

READ MORE: The Tories have failed to turn the Khadr payout into a political win

Every part of Scheer’s description of Khadr has been seriously disputed, but that argument is for another day. What was striking was that Scheer seemed to think Google exists to organize tributes. That when I google “wheat,” I should see only upright and hard-working prairie farmers. That when I google “politician,” the search engine should return only images of the ﬁnest leaders. And, of course, only the ones I agree with.

Somewhere in the sprawling Google empire, somebody decided this wasn’t an argument worth having. So, within hours of Scheer’s tweet, it was impossible to get images of Khadr by googling “Canadian soldiers.” The scale of the victory was microscopic. Speer is still dead. Khadr can’t take back the decade he spent in prison. Very often the world doesn’t care what we call it.

Later, MPs unanimously demanded Netflix remove footage of the terrible Lac-Mégantic train wreck and ﬁre from a Sandra Bullock thriller. Apparently there’s a brief scene where Lac-Mégantic ﬁlls in for some imaginary disaster zone. This, too, is an outrage, and MPs demanded that Netflix replace the scene or compensate Lac-Mégantic residents.

Such a remedy would not bring back the 47 who died in the Lac-Mégantic disaster. It wouldn’t change the increasing prominence of oil transport by rail in the absence of new pipelines. It wouldn’t even have the coercive force of law, because the MPs’ declaration was only an expression of preference, not of state power. But like Scheer’s tweet, it let everyone know how everyone felt. Here in the nation’s capital, we are all about letting everyone know how everyone feels.

RELATED: Remembering the terror in Lac-Mégantic

And so it came to pass that, in the same week, MPs also found time to pass a resolution demanding that Paul Henderson be inducted into the Hockey Hall of Fame. Here again was the preoccupation with appearances. And here again, in the very exercise of Parliament’s prerogatives, we saw an expression of its impotence. I mean, Paul Henderson still isn’t in the Hockey Hall of Fame, Netflix still has no power to raise the dead, and Google searches sometimes turn up icky things.

Another characteristic these outbursts shared was that they amounted to requests. There are different levels of state intervention, from the most coercive—shooting people, expropriating land—to the least coercive, which I suppose these days would include tweeting various with-it hashtags. Unanimous resolutions “calling on” companies to do this or that are, maybe, one level more coercive than tweeting.

Even in policy areas closer to the state’s core competencies than TV production and hockey mythologizing, we’re starting to see signs of this same odd performative petitioning from our leaders. Karina Gould, the amiable minister of democratic institutions, announced the government’s plan to safeguard future elections against hacking, fake news and other mischief. Large parts of the policy are given over to statements about how the government “expects” Facebook and other social media to do helpful things. I’m not sure how a company should respond to a government’s expectations, and I suspect an expectation is functionally the same as a hope or a wish. You’ll note that the Canada Revenue Agency doesn’t “expect” you to do your taxes. It ﬁnds harsher words.

READ MORE: Fake video is a big problem. And it’s only going to get worse.

I’m not sure of the precise moment when Parliament turned into an old man yelling at clouds, but I suspect it has something to do with a dawning sense of how hard it is to influence actual things and people. When Justin Trudeau was elected, it was briefly popular to announce that “Canada” was “back.” Left unanswered were two questions: Where it had been, and what it would do now? Canada’s backness has had no perceptible effect on the democratic health of our closest ally, the U.S. Nor has it on Chinese aggression, Malian peacekeeping, Venezuelan democracy, Britain’s relationship with the EU, North Korea’s nuclear threat, or any of several dozen other issues you or I could list.

For now, I’m not even going to argue that the Trudeau government is handling these issues badly, only that it’s not clear how any of them would improve if any conceivable Canadian government handled them as well as they could be handled. It’s not as though any of Trudeau’s rivals hold the key to unlimited influence. Scheer couldn’t keep Maxime Bernier in his party. Jagmeet Singh hasn’t turned his personal charm into any kind of political success. The three of them are younger and have more energy than most leaders we’re used to seeing. The world seems immune to their charms. You’d develop a fascination with Google and the Hockey Hall of Fame too. A man’s reach should exceed his grasp, but maybe next year.