Parliament's Centre Block is about politics—and journalism, too

As the main building on Parliament Hill closes for renovations, a nostalgic look at how the place honours the printed word 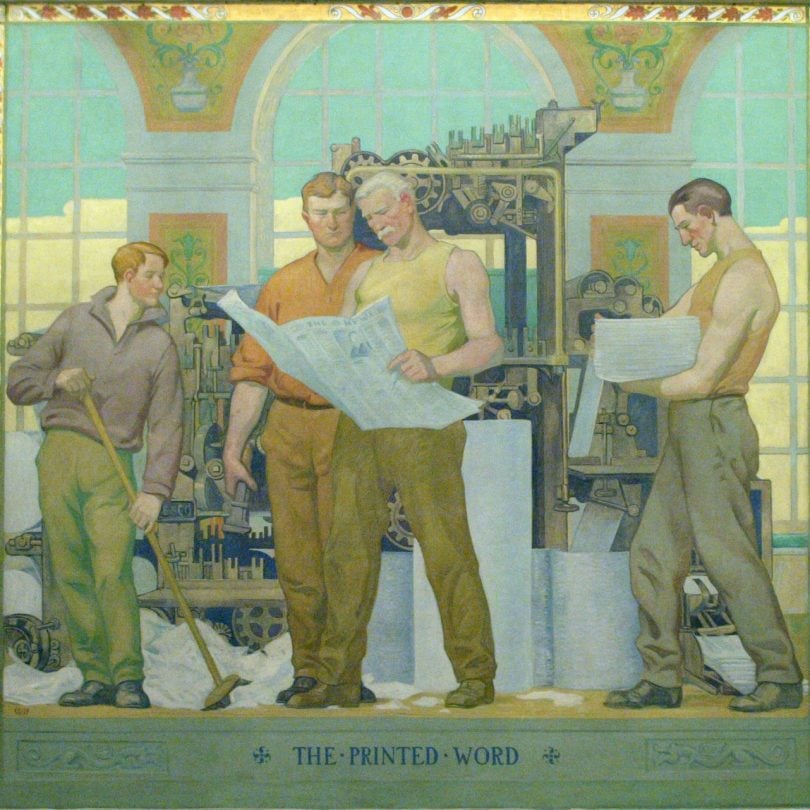 Most Canadians know Parliament’s Centre Block, which is being emptied for at least a decade of renovations, as an arena for democratic debate and a hive of practical politics. The debate flies, of course, in the wide-open House of Commons. The politics flows along those low corridors and eddies into the limestone alcoves seen in news clips, where any visitor might glimpse the heads of the powerful bent together in close conversation. Even the Prime Minister’s Centre Block office—now and then displayed for the cameras at the start of some high-level meeting—looks suitably shadowy for deal-making, with its dark paneling and slatted wooden blinds.

But my own favourite place in the building isn’t the Commons, or the hallway lined with prime ministers’ portraits, or any of the politicians’ private lairs, or even the glorious Library of Parliament. I’m a reporter, so I like the north end of the Reading Room. Above the door on that wall hangs The Printed Word, a mural executed in about 1921 by Hamilton, Ont.’s own Arthur Watkins Crisp. It features strapping pressman examining a newspaper proof, hot off the presses that stand at the ready behind them, along with pristine rolls of newsprint awaiting ink.

Those were the days: the unquestioned might of print. I can’t quite envision a future mural celebrating the clout of social media. But that’s just nostalgia, I guess, which must be excused as Centre Block shuts down for prolonged fixing up. Who knows what the media landscape will be like when CB 2.0 reopens? In the meantime, I can’t help thinking way back to 1990 and covering an evening meeting of the House finance committee in the Reading Room with Hy Solomon, the Financial Post’s bureau chief and my boss.

The main witness that night was the formidable John Crow, then the Bank of Canada’s governor. When the committee adjourned, and everybody was heading to the main exit right under the Peace Tower, as I remember it, Crow found himself walking near Solomon. They were both lean men given to purposefully striding along. “So, how did I do, Hy?” the central banker ventured to ask. And the veteran columnist answered, after maybe the briefest pause to reflect, “Not all that well.” Then silence.

Solomon, who died only the following year, was actually a gracious man, but inclined to give (and expect) a straight answer to a straight question. In a way, that captures the ideal that I like to think defines the goings-on in Centre Block at their best. Blunt exchanges among politicians, between politicians and journalists. Behind closed doors, frank advice from non-partisan public servants to the elected politicians who make the final calls. None of it tainted with rancour, when it’s done right. Of course, it often isn’t.

RELATED: How a new Centre Block rose from Parliament’s ashes

It might sound fanciful to suggest the building itself nudges us toward the proper mix of candour and cordiality. Still, the architectural framing doesn’t hurt. Think of how Washington, D.C.’s columned neoclassical buildings evoke Roman power. Ottawa’s neo-Gothic style is less lofty and imperial, more intricate and involving. Fewer of its spaces seem designed to elicit awe than to suggest maybe this would be a good place to duck into a corner and talk matters through. That started with the Confederation-era buildings—wonderfully preserved in the West Block, East Block and Library of Parliament—and the mood was largely sustained in the Centre Block, built after the 1916 fire destroyed its predecessor.

Even where it soars, the Centre Block isn’t about unbridled power, per se, despite being built in the 1920s, when Canada had just helped win World War I and was experiencing a flush of modern confidence. One of the best decisions ever made concerning the Hill was to dedicate its punctuating tower, not to victory, but to peace. That was how the architect, John Pearson, wanted it. “I feel that one cannot approach the building up the centre road without experiencing its mute appeal for toleration, moderation, dignity and peace,” Pearson wrote in a letter to William Lyon Mackenzie King in 1927, the year the Peace Tower was completed.

Pearson gets credit for those Reading Room murals, too. He personally requested the authority to pay Crisp a tidy $19,000 in 1920 to paint them. At the other end of the room, facing the pressmen in The Printed Word, the muralist gave us an art deco goddess, The Spirit of the Printed Word, holding up the torch of knowledge and a mirror representing the spreading of its light to the world. She’ll have to watch over the Centre Block during the renos, not so much awaiting the return of the politicians, as looking out for those who’ll be back again to write up what they say and do.