In prepared remarks, the head of CSIS in 2016 warned of activities by Russian and Chinese operatives and how politicians should counter them 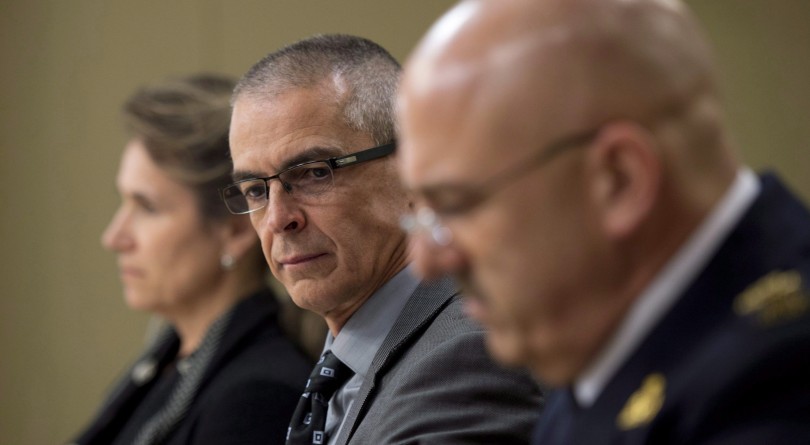 As allegations arose of outside meddling in the past U.S. election, Canadian spies prepared to warn their politicians that the north of the border is not immune to external interference, and in their hallways of power, too, the smell of foreign spooks lurk.

Russia and China could be trying to influence you, to use you and your staff to advance their causes, to induce you with “free travel or financial contributions” and if the carrot fails, to apply “coercion based on some observed exploitable personal or family weakness,” Canada’s then-spy chief Michel Coulombe said in prepared remarks for separate briefings to parliamentarians and ministers. The stick has worked well in the past, he warned.

Coulombe’s August 2016 speaking notes, obtained under access-to-information laws, give rare insight into the shadowy world of “foreign influence activities” in Canada and the efforts to counter them.

There are no public records of the associated briefings. The Canadian Security Intelligence Service (CSIS), which Coulombe headed at the time, declined to provide details and would not immediately confirm if the briefings themselves actually happened.

The Russian embassy in Ottawa did not respond to requests for comment. The Chinese embassy acknowledged a request for comment, but did not provide a response. Both countries have in the past denied acting inappropriately.

READ MORE: How to expel a Russian diplomat

Referencing accusations of Russian interference in the 2016 U.S. election—which spiralled into a special government investigation, pushed the issue of foreign meddling into the spotlight and raised alarms across the world—the notes read that cyber defence has become a priority for the intelligence community.

The Communications Security Establishment (CSE), Canada’s other major intelligence agency, warned last year in a report that online attempts to influence the country’s elections are on the rise. In March, Canada expelled four Russian foreign service members whom it accused of being “intelligence officers or individuals who have used their diplomatic status to undermine Canada’s security or interfere in our democracy.”

CSIS says the country is an “attractive target for espionage” and has said that some Canadian politicians could be under foreign sway.

CSIS has investigated “many” cases similar to that of the expelled Russians and has held “service-to-service” talks with foreign spy agencies to express displeasure, the notes read, without providing specific details. A section labelled “Classified Examples” was redacted.

It is often hard to distinguish between regular diplomacy and inappropriate foreign influence, but generally, the latter involves “deceptive or clandestine or a threat to any person,” often with the goal to influence decision-makers on specific policies and strategies, monitoring of dissidents or exerting control over the diaspora, the notes read.

China’s rapid economic rise accompanied a desire to exert greater global influence, and Russia—with its aggressive attitude toward Ukraine and the North Atlantic Treaty Organization military alliance, of which Canada is a member—“continues to pose a threat to our national interests,” the notes read.

“Obviously, China and Russia are not the only countries conducting foreign influence activities in Canada,” the notes read, although they did not name the other states.

Influence activities on politicians begin with a period of cultivation and building of rapport, including offers of assistance in pursuit of ostensibly shared goal and favours, such as facilitating the removing of certain travel barriers for family and friends, the notes read.

If you are under foreign influence, you probably won’t even know it—most who act against their country are not conscious participants, Coulombe said in the notes.

Foreign states also use ethnic communities to influence politicians, covertly shaping those groups to create the “illusion” that the views and concerns they express are their own, when in fact they were directed by their home states, the notes read.

“What should you look for?” the notes ask. Politicians should ask themselves if they were pressured to adopt certain stances that would benefit other states; if constituents were harassed by those supporting an outside cause; or if a foreign representative asks “probing questions” on issues of interests to their states.

“Also ask: if your answers to probing questions were passed to a third state or individual, would this development be a concern?” Coulombe said in the notes. “At a public meeting or scrum, is the attendance reasonable, proportional and reflective of the expected domestic interest in the topic … or is it unusually well-organized, vocal, or uniform?”

When asked about the context of the Coulombe notes, an agency spokeswoman says: “In the course of our business, CSIS prepares advice and recommendations for the government of Canada. As you can appreciate, I cannot go into specific details … What I can say is that foreign influence activity is a long-standing, serious threat to national security and one of our main priorities.”

While CSIS has not confirmed or denied the briefings happened, CSE says it has done its own briefings after its report on election tampering last year. A spokesman says the CSE has met political parties and parliamentarians and federal and provincial bureaucrats and electoral officers. “CSE has been asked by the minister of democratic institutions to continue our analysis of cyber threats to Canada’s democratic process,” he says, adding that there will likely be more briefings to come.