Party of one: Elizabeth May wins, but Greens lose to strategic voting

Despite Elizabeth May's eternal optimism, the Greens landed on the wrong side of the strategic voting equation. Now what? 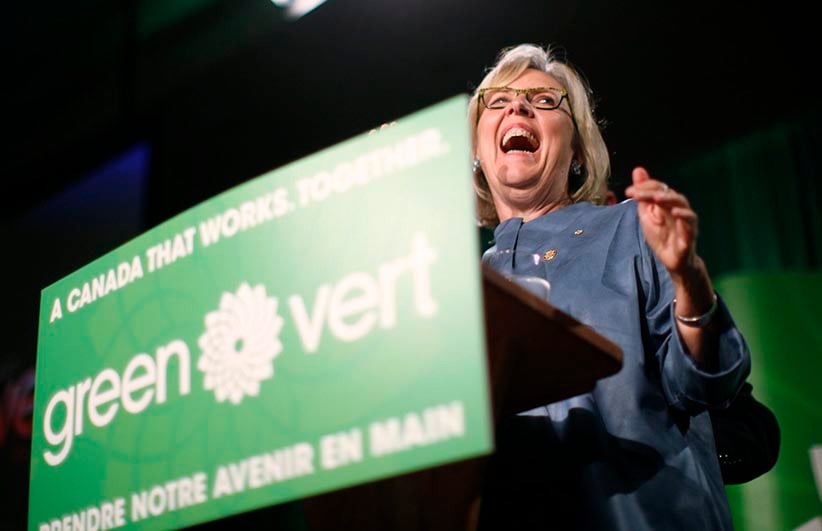 Green Party leader Elizabeth May, speaks to volunteers, campaign staff and supporters, after finding out she’s been re-elected during election night at the Victoria Conference Centre in Victoria, B.C., Monday, October 19, 2015. (CHAD HIPOLITO/CP)

Green Leader Elizabeth May finished her campaign with a three-day weekend bus blitz of all seven ridings on her home turf of Vancouver Island. It was powered not by canola oil, electricity or fairy dust. It ran on conventional diesel, and May’s eternal optimism. At every stop the message was the same: that a small cadre of Green MPs could act as “matchmakers” in what she then foresaw as a likely informal coalition of either a Liberal or New Democrat government. Or in her wildest dreams, even holding the balance of power.

It didn’t take long Monday night at the Greens’ election night headquarters in Victoria for news of a Liberal majority government to put an end to any hope of Greens holding a balance of power. And as B.C. vote counts trickled in, hopes of a Green breakthrough in Vancouver Island evaporated as well. It came down yet again to Elizabeth May, party of one, carrying Saanich-Gulf Islands.

All the doorstep promises and backing by B.C.’s many environmental groups came to naught. “We’ll vote for you next time, Elizabeth,” seemed to be the general consensus. The priority this time was ousting the Conservatives.

If Elizabeth May was gutted, as she surely must be, she hid it well. Even before the results of her own riding were finalized, she bounded up on stage at the Victoria Conference Centre. “Welcome to the first night of the post-Harper era,” she crowed to raucous cheers.

Landing on the wrong side of the strategic voting equation was an issue plaguing the Greens even before the start of the campaign. Despite a strong cast of candidates, especially in selected B.C. ridings, one of the first questions on the doorstep by so-called progressive voters is: why split the vote when the priority is getting rid of Harper?

Claire Martin, the former CBC national meteorologist, who played a high-profile role for the Greens throughout the campaign, admits she initially resisted May’s entreaties to run in her North Vancouver riding for that reason. May, as she did throughout the campaign, won her over with the example of her own riding of Saanich–Gulf Islands, where she defeated Conservative cabinet minister Gary Lunn in 2011. May grew the Green vote from about 10 per cent in 2008 to 47 per cent in 2011. Rather than splitting the vote, she managed to boost voter turnout to 75 per cent, the highest in the province.

May’s magic vote-growth serum did not take in the rest of the country, where a strong ABC (Anybody But Conservative) movement, propelled by organizations like the national organization Leadnow, and the Dogwood Initiative in B.C., used public donations to finance riding-level polling to alert voters to the party best able to defeat Conservative candidates. In Martin’s riding, polls favoured Liberal Jonathan Wilkinson, who went on to trounce Tory incumbent Andrew Saxton. Even Jim Stephenson, a former Green candidate in the riding, publicly endorsed Wilkinson, letting the air out of Martin’s campaign.

Next door in Burnaby North–Seymour, Green candidate Lynne Quarmby—a Simon Fraser University professor whose environmental credentials were burnished by an arrest last November during a protest of the proposed expansion of the Trans-Mountain bitumen pipeline in Burnaby—was also plagued by strategic voting.

Frustrated, Quarmby addressed the problem head on. “My polling numbers climb on the merits of my campaign and fall on the fear of Harper and the push for ‘strategic voting,’ ” she said in a statement distributed at all-candidates meetings and on doorsteps. “Do I step aside because last week my polling numbers took a dip?” she asked. “I do not believe that stepping down would be the right thing to do. We need a caucus of Green MPs in Ottawa to be the conscience of Parliament, to push as hard as we possibly can for real action on climate change and meaningful policy to address social injustice.”

Quarmby was soundly defeated Monday by Liberal Terry Beech. Her conundrum is one most Green candidates face, one not likely to change as long as the first-past-the-post voting system allows parties to govern without needing a majority of votes. Both the Liberals and New Democrats campaigned on vague ideas of voter reform, though what form that might take—proportional representation, single transferable vote or an instant runoff system—remains unclear.

Meanwhile, Green insiders fretted that with a Liberal majority, Justin Trudeau may lose his ardour for meaningful electoral reform—the Greens’ last best hope for breaking out of the margins of federal politics. “It’s no secret this is something the Green party would very much like to see,” said Jo-Ann Roberts, the Green candidate in Victoria, who lost to NDP incumbent Murray Rankin, of electoral reform. With a Liberal majority, she said, “I’m a little less optimistic.”

With the Liberals firmly in power, will they really push for a reform that may well benefit the Greens the most?