As Martin watched his portrait unveiling, the former PM morphed into valedictorian 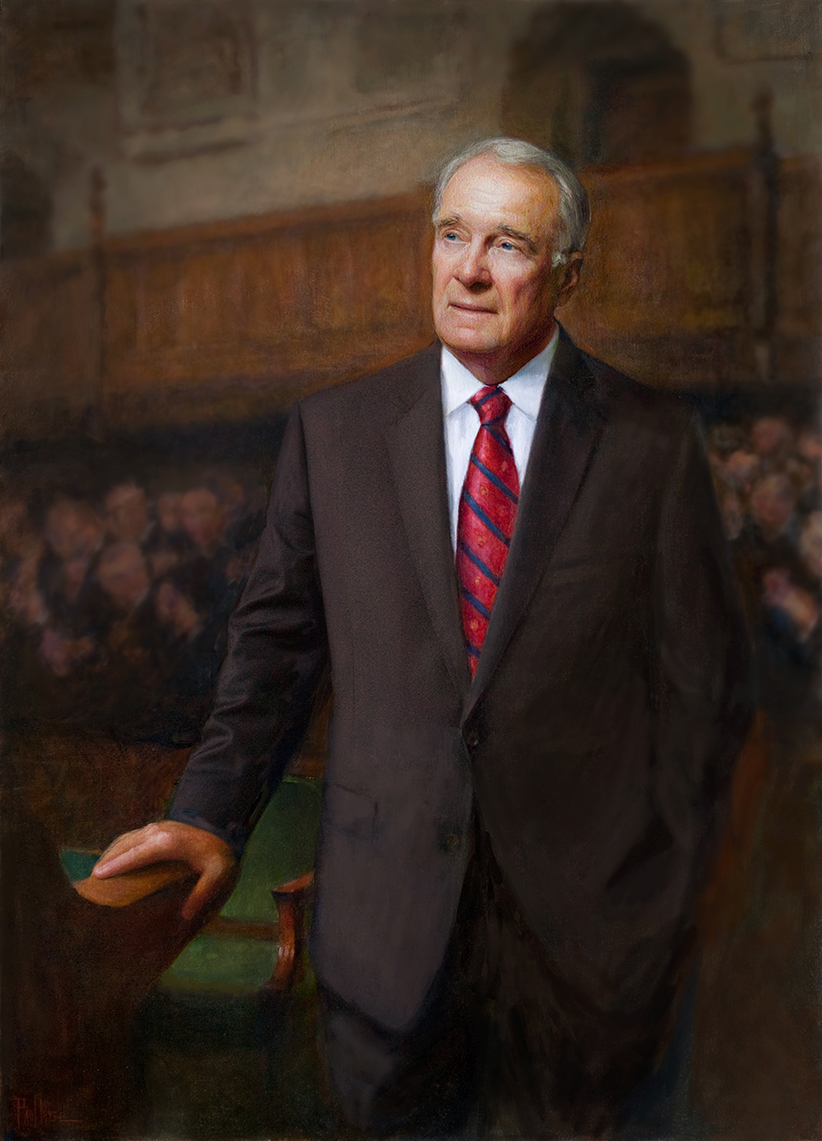 The unveiling of former prime minister Paul Martin’s portrait on Parliament Hill on May 11 had the distinct feel of a Liberal class reunion. There was a lot of looking back with misty nostalgia and peering ahead with equally shining uplift, all of it goosed by the giddy, back-slapping energy of people who haven’t been together in the same room in a long time.

Room 237-C, where the unveiling took place—commonly known as the Reading Room—was crammed with twice as many people as would have comfortably fit, and wiltingly hot. Guests fanned themselves with their tasselled programs, or simply sweated into their shirt collars. At the front of the room, the portrait awaited its audience behind one of those miniature red velvet ceremonial curtains that are simultaneously grandiose and a bit absurd.

The jocular tone was set early on, when Claudette Commanda, opening the proceedings with an Indigenous greeting, addressed the men at the centre of the dais as “Right Honourable Prime Minister Trudeau” and “Honourable Paul Martin.” Her accidental demotion of Martin drew loud laughs from the room and Martin himself.

Regan opened the speeches by reciting a chronology of Martin’s career, beginning with his birth into a political family. “Now, some of us on this stage have an inkling of what effect that can have on a boy’s career choices sooner or later,” Regan noted. Trudeau grinned at the floor, shook his head and glanced over at the speaker from beneath arched eyebrows.

Throughout the speeches, each mention of Martin’s career highlights acted like an applause-o-metre on an old-school game show. Paying down the national debt as finance minister and ushering in a string of budget surpluses was the accomplishment that sent the arrow shooting off the chart. The Kelowna Accord with First Nations, aid for developing economies and improving the federal government’s relationships with cities played well, too. “It is that commitment to building better opportunities for Indigenous peoples, for Canadians and for the entire global community that I will think of when I pass the portrait we are about to unveil,” Trudeau said. 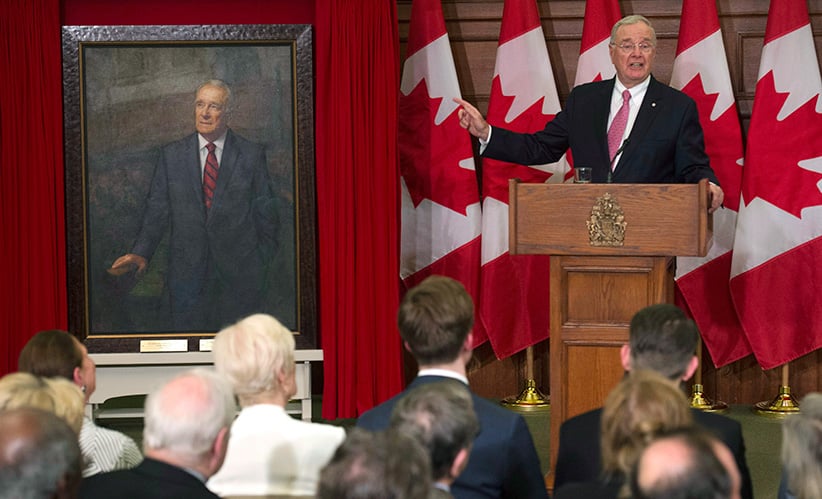 At the very back of the room, someone trilled out a brief faux drum-roll when Martin took his place next to the painting. As the little curtain drew back, the former prime minister raised his eyebrows in delight—he had already seen the portrait—and turned toward the room, as though to say, “What do you think?” He gestured to the painter, Paul Wyse, sitting in the front row, and Wyse stood to acknowledge the applause.

Martin began speaking by noting how emotional the day was for him; it was an unnecessary confession, given his red-rimmed eyes. He had requested an unusually kinetic setting for a prime ministerial portrait, choosing to be depicted in the midst of the bustling House of Commons because, he said, “Parliament must reclaim centre stage as the place where those choices are made.”

At one point, Martin’s youngest grandchild, one-year-old Lara, began to fuss, and Martin called out to his escaping daughter-in-law to stay while he told a story. Early in his political career, during the crescendo of one of his first big speeches, a baby started crying, he recalled. “I was younger and considerably more pompous,” Martin said. “I said, ‘Madam, Madam, don’t take your son out of the room.  He is not bothering me.’ And she yelled out, ‘Yeah, but you sure are bothering him.’ ” The punchline drew huge laughter and applause, and Lara settled.

Martin’s address was awash in personal nostalgia—he recalled that his first caucus meeting had taken place in that same room, though he received considerably less applause then—and glowing rhetoric about what can be accomplished in Parliament, if only they could all stop shouting at each other. More than once, the former prime minister addressed the new MPs, staffers and bureaucrats in the room. “Why are you here?  I’ll tell you,” he said. “You’re here because it is possible to do more good in five minutes in government than it is anywhere else in five months.”

At some point, the class reunion feel of the day had shifted to a valedictory address.

As Martin wrapped up, standing next to the paint-and-canvas likeness that will represent him for posterity, his message began to sound much like a grown-up, Parliament Hill version of Dr. Seuss’s Oh, The Places You’ll Go! “If there are times when you get a little discouraged—which will happen—I would suggest that you walk down the corridor where the prime ministerial portraits are hanging,” he said. “Stop and listen closely, because you’ll be hearing every single one of us cheer you on.”