Paul Wells: 'As far as I can tell, Stephen Harper is winning'

The Conservatives are gaining ground in the polls faster than the Liberals. And the NDP slump is serious. 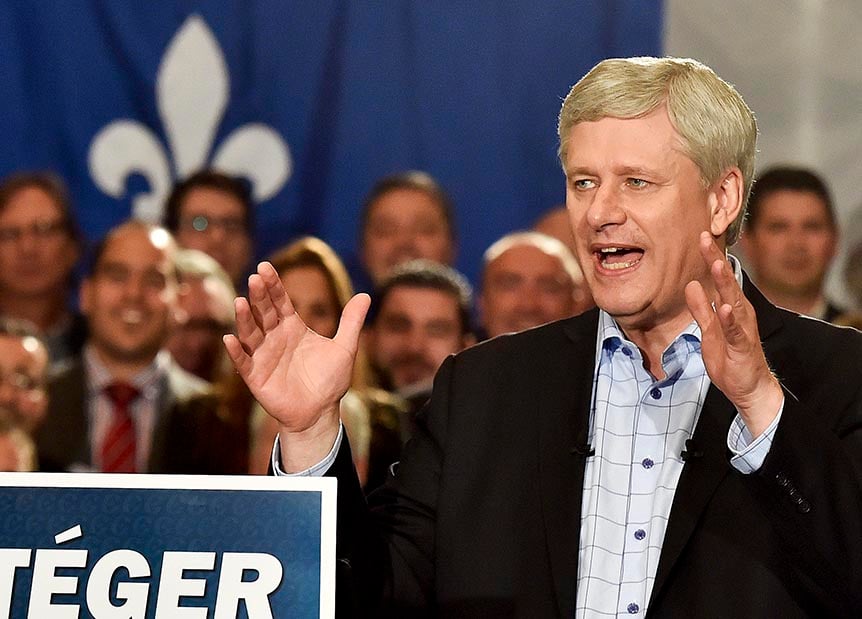 Conservative leader Stephen Harper speaks at a rally during a campaign stop in Quebec City on Wednesday, September 30, 2015. (Nathan Denette/CP)

Hi. Remember that great joke I had a few weeks ago about the two hikers chased by a bear, and the one guy starts lacing up running shoes, and the other guy says you can’t outrun a bear, and the first guy says, “I just need to outrun you?” That joke? And how Stephen Harper was the bear, and the hikers were Justin Trudeau and Tom Mulcair?

Yeah. Turns out that joke doesn’t work if the bear eats the slow guy and then runs down the one in sneakers.

From the archives: Is this the last stand of Stephen Harper?

Now, winning a campaign isn’t necessarily the same as winning an election, but, if recent trends hold, it won’t even be necessary to make that distinction.

Here are the trends: The NDP has lost support over the past month. The Liberals have gained support, but not much. And the Conservatives have gained more.

Here are the results, from the polling aggregation website ThreeHundredEight.com. The website’s owner, Éric Grenier, has kept a running average of public polls for each week of the campaign. After the first week, the NDP stood at 35 per cent. By Week 4, it was at 34 per cent, then fell to 29 per cent at the end of Week 8. The Liberals have risen at glacier pace from 27 per cent after Week 1 to 31 per cent after Week 8. Plainly, Justin Trudeau brought his sneakers for this hike.

Related: How Gerald Butts plans to make Justin Trudeau the next prime minister

The thing is, these trends have continued through this week, the campaign’s ninth. On Tuesday, Nanos showed the NDP down three more points, to 26 per cent. And on Thursday, two pollsters—Forum, whom I never take seriously, and the Angus Reid Institute, whom I do—both showed the Conservatives pulling well ahead of the others. Angus Reid Institute showed them at 34 per cent, with the others tied at 30 per cent.

The numbers bounce around and vary from pollster to pollster. What’s been most striking about this campaign has been the way three parties have contended realistically for power until now; how close this race has been. But the Conservatives have gained faster than the Liberals, and the NDP slump is serious. Historically, polls have modestly underestimated the Harper Conservative vote and exaggerated other parties’, compared to the final election result. If the Conservatives gain a couple more points, then get a ballot-box bonus of a couple more, it’s not impossible to imagine them winning another majority.

First, the Mike Duffy trial took a recess until November. The revelations from the trial about Nigel Wright and Ray Novak’s amazing bubble-like impermeability to news from his colleagues’ offices made August a lousy month for the Conservatives, but then they stopped. For days, Harper took questions on no other subject. In the last three televised debates, there has been essentially no substantive mention of the Duffy trial.

But, of course, I’m saving the most significant events for last. On Sept. 2, Alan Kurdi’s body washed up on a Turkish beach. Thirteen days later, a Federal Court of Appeal panel dismissed the feds’ appeal over veiled citizenship ceremonies. And, 10 days after that, Justin Trudeau reaffirmed his opposition to a Conservative law that provides for citizenship to be revoked for terrorism or other grave crimes. Later that day, the Harper government revoked a convicted terrorist’s Canadian citizenship. That was last week; this week, we learned the government has sought to revoke other convicts’ citizenship, including that of a native-born Canadian who has never seen the land where he has another, inherited citizenship.

On this rockpile of events and fears, the Harper campaign has found purchase for a steady climb. The Prime Minister’s response to little Alan Kurdi’s death—insisting on military engagement against Islamic State as well as refugee resettlement—struck some observers as callous. But, within days after his comments, France joined allied airstrikes against ISIS in Syria and, this month, British Prime Minister David Cameron will ask Parliament for a mandate to do the same. Their rationale matches Harper’s.

Related: How the refugee crisis went from burden to boon for Harper

On refugees, some commentators were disheartened by Chris Alexander’s insistence on security—which implies the refugees are a threa—in increasing the rate of settlement. But, in Europe, even the most welcoming leaders—Angela Merkel, the European Council’s Donald Tusk—pivoted rapidly from an open-door policy to a far more diligent policing of the Union’s external borders, because the refugees number in the millions. “Recently, I visited refugee camps in Turkey and Jordan, and I heard only one message: ‘We are determined to get to Europe,’ ” Tusk said in Brussels on Sept. 24. “It is clear that the greatest tide of refugees and migrants is yet to come. Therefore, we need to correct the policy of open doors and windows.”

So Harper has support for his positions, including, it is becoming increasingly clear, from voters who will change their vote on the issues he has chosen.

Veiled citizenship ceremonies are an exquisitely slim wedge on which to build a comeback: Since everyone taking the oath must reveal her identity minutes before the oath, and since nothing stops anyone from putting a veil back on minutes later, this is a dispute over how an infinitessimal fraction of the immigrant population should behave during a few minutes of their lives. Critics of Harper’s policy see that as sufficient reason to mock it. Quebec’s National Assembly, unanimously, agrees with Harper’s policy. Denis Coderre, the longtime Liberal MP who is Montreal’s popular mayor, and who could pick any side of this debate that pleases him, agrees with Harper’s policy. A lot of voters outside Quebec seem to agree with Harper’s policy.

Justin Trudeau doesn’t, and finds himself sailing into the wind. Tom Mulcair doesn’t, and it is not clear his campaign can recover. The trends I’ve described could be reversed in the less than three weeks remaining in this campaign. But it’s hard to see what could happen that would be as momentous as the events that set this dynamic into gear. The polls showed an effective tie for weeks. Everyone waited for the tie to break. It has broken in Harper’s favour. His detractors were sure he could not win in 2006 and 2008 and 2011. He is used to the feeling he has now.