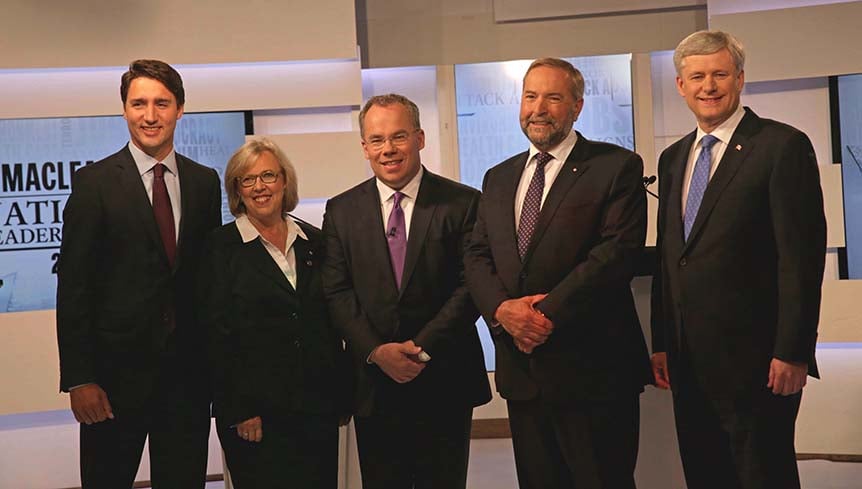 Two examples: I was busy hosting the Maclean’s debate on Aug. 6, but I’m told there was another debate that night, on Fox News, for candidates for the Republican presidential nomination. Everyone says Donald Trump put on the best show, and he has led in the polls since then despite his own gaffes and opponents’ best attempts to discredit him. But Trump is sui generis, which is Latin for “nutty nutbar,” so try to look past him to the debate’s other story. That would be Ben Carson, a neurosurgeon from Maryland whose debate answers were polite, stilted and low-key. Already he’s running a close second behind Trump in Iowa. Carson’s show-business value at the August debate was cruelly limited, but he said thoughtful things in ways that suggested he meant them. And he’s done fine since.

My other example is older and took place in precincts more local. In the 2000 campaign, Jean Chrétien was worn, unloved by his own party, beset by strong opponents: Joe Clark, Alexa McDonough, Stockwell Day. When debate night came they set upon him, taking turns to chew at his pant cuff. He could barely get a word in. It was a bad English night for him. The vocabulary wouldn’t come. When the election was over, he won with a bigger majority than before. Whoever won the debate, it wasn’t Chrétien. He had to content himself with winning re-election.

The journalistic vocabulary for covering these events hasn’t kept pace with audiences’ sophistication. People in my line of work look for clever lines that can play as short clips on TV, for the quick put-down, the glib slogan. Most people look for subtler things: confidence, body language, a serious attitude. The online polls immediately after a debate aren’t helpful in measuring that sort of thing. The polls for weeks afterward are a better measure. The subtler things take time to tell.

The moderator for Thursday’s Globe and Mail debate, the newspaper’s Northern Irish editor-in-chief, David Walmsley, is one of the most cocksure fellows in Canadian journalism, but I suspect he’s found time in recent days to feel nervous. If it’s any consolation to him, most people won’t watch this debate to see how he does. Their business is with the party leaders.

The moderator’s task is straightforward: to identify broad topics for discussion, and to put the big questions around which the candidates can disagree. There is no room for finesse. The leaders have been advised by their staffs to ignore questions of detail, and to pivot instead back to some general theme they want to emphasize. It’s not the moderator’s job to throw a knockout punch. I spent July watching a lot of old debates on YouTube; the most specific questions are always the easiest to avoid. A raised eyebrow. A chuckle. “Well, David, that’s an interesting question, but what I think Canadians really want to know is . . . ”

The Maclean’s debate was informative and helpful to viewers because it was the first. It wasn’t a particularly confrontational debate because it happened so far in advance of voting day. Anyone who had a bad night could hope to recover in plenty of time before most people vote. That’s less true now, and I suspect the ever-rising stakes will make for a sharper, at times nastier, debate. It’s just human nature. None of the three leaders likes being so close to the others in the polls. They’ll want to shake the trend up.

They shouldn’t try—remember my first point, that slow and steady can often win these confrontations—but it’ll be very hard for them to ignore the dictates of their rising anxiety, five weeks closer to the end of the campaign. That’s another surprise in political debates: that despite all the consultants, the rehearsals and the briefing books, so much still comes down to human nature under pressure. It’s fashionable to accuse our politics of being so thoroughly scripted that there’s no room for spontaneity. But you can’t script one of these things. Too much chaos gets in, too fast. Human nature is on ample display. That’s why these evenings are worth watching, and why, now that I’ve got the night off, I’ll be glued to my TV.