On the question of cameras in the House of Commons

WHERRY: Removing them would be an admission of defeat 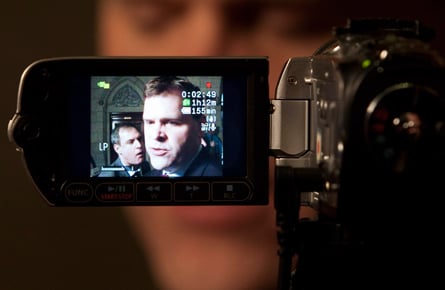 Minister of Transport, Infrastructure and Communities John Baird is seen on the screen of a video camera THE CANADIAN PRESS/Adrian Wyld

Back, very belatedly, to this. Some months ago, Max Fawcett resurrected the suggestion that the key to civility in the House of Commons is the television camera—specifically that Question Period would benefit from a complete lack of cameras.

The theory goes that our current mess can be traced back to the introduction of television cameras in the late 1970s. That since then the urge to play for the cameras has reduced our democracy to professional wrestling. That before that it was somehow better.

Almost all pining for simpler times is misguided, but even if we accept that this is at least somewhat true—that the presence of cameras has contributed significantly to our present incivility—that we would do away with the cameras has always struck me as a terrible idea and the worst kind of solution.

It would be, first and foremost, an admission of defeat. A concession that not only can’t our politicians behave respectably in the public sphere, but that we shouldn’t even expect them to. It is the sort of punishment a parent applies to a child—”If you can’t behave yourself in front of the camera, we’re taking away the camera.” And however beholden our representatives are to us, they are not children. Or at least should be held to a higher standard of behaviour than the average Grade 1 student.

It is no small point too that such a move would run directly counter to the principles of accountability and transparency on which our democracy depends and of which only more will be demanded in the decades ahead. The future of democratic governance is more information, more access and more understanding. And therein lies a much more sensible solution if we are to start fiddling with the cameras in the Commons.

The answer in this regard, if there is one, is not less cameras, it’s more cameras. Indeed, what part of the “no camera” theory ignores is how much already occurs off-camera and how much that contributes to the general atmosphere of loutishness. Indeed, however dreadful and soul-destroying the official performances are, our representatives are rarely as straightforwardly objectionable as when they know their comments won’t be visually or audibly recorded. Were there nowhere to hide, were multiple cameras arranged to capture and then air all that occurs, one imagines many would suddenly lose the courage that presently emboldens them to scream and snark across the aisle.

Of a Library of Parliament report that commended the introduction of cameras to the House, Max writes as follows: “… implicit in this analysis is a decidedly American fetishization of public scrutiny and accountability, as though anything that doesn’t take place in full view is automatically worthy of suspicion. More importantly, it infers that people like Aaron Wherry and the rest of the Parliamentary Press corps are incompetent, either incapable of or unwilling to accurately describe what takes place in the House of Commons each day.”

As far as the fetishization of public scrutiny and accountability, American or otherwise, it is perhaps too late—or at least now futile—to quibble. We are, at this moment, cynical and frustrated and distrustful of our politicians. They have too often squandered our faith in them. They have too often been exposed as duplicitous. So if we are automatically suspicious it is not without some degree of cause. And if we are ever to feel better about the political process, transparency (as, hopefully, both a corrective and reassuring tool) would seem to be key.

As for the second bit, this inference is not far off. In a way.

In one regard, a written account can never quite match the appeal of a visual or audible record. For however much we may enjoy or trust the written word, we now, perhaps more than ever, seek out the visual. And nor can a written account ever match the authority of a visual or audible record. I might write, for instance, that a certain MP leaned across his desk and made some disparaging remark about his rival opposite. But if he or she quibbles with my account, and no record exists to prove who said what, we’d be left to gather supportive witnesses and plead our cases. Ultimately, everyone would conclude that nothing could be proven. (At least two of the most infamous incidents in Parliamentary decorum history followed this basic scenario.)

More specifically, this bit of Max’s about the press gallery gets to an important point about the present state of affairs. As it is, Question Period is not covered with any great enthusiasm by the press gallery. On an average afternoon during QP, half the seats in the gallery reserved for reporters are unfilled. Most of those who do pay QP any attention prefer to watch the proceedings on television and even that attention, it seems, is cursory. What’s said in QP is not often poured over and scrutinized and checked and corrected. And that’s QP—the 45 minutes of each day that is most dwelled upon by those on the Hill. Most of what else is said in the House of Commons each day is ignored entirely. There are various reasons for this, some of them legitimate (the constraints of resources and time, the perfunctory nature of some of what passes for “debate”). But therein lies a certain degree of the problem. Without greater attention there is less accountability for what one says and how one acts. There is no particular reward for positive behaviour, no great punishment for poor behaviour. If much of the coverage is based on a fleeting quip or a particularly angry denunciation, that is what one—one who inherently seeks and requires coverage—will strive to achieve.

I concede that removing the cameras might eliminate that calculation. It might even compel members of the press gallery to make the arduous journey up the one flight of stairs it takes to reach the gallery in the House. But the extra exercise would not quite seem to be worth the infantilization of our democracy. So perhaps before we concede to that, we might try more cameras and a more scrupulous press gallery.