Perception shift: What Justin Trudeau won by losing his cool

His hair’s short, his manner tougher. The youth candidate has recast himself as an old-fashioned pol—with some unexpected results 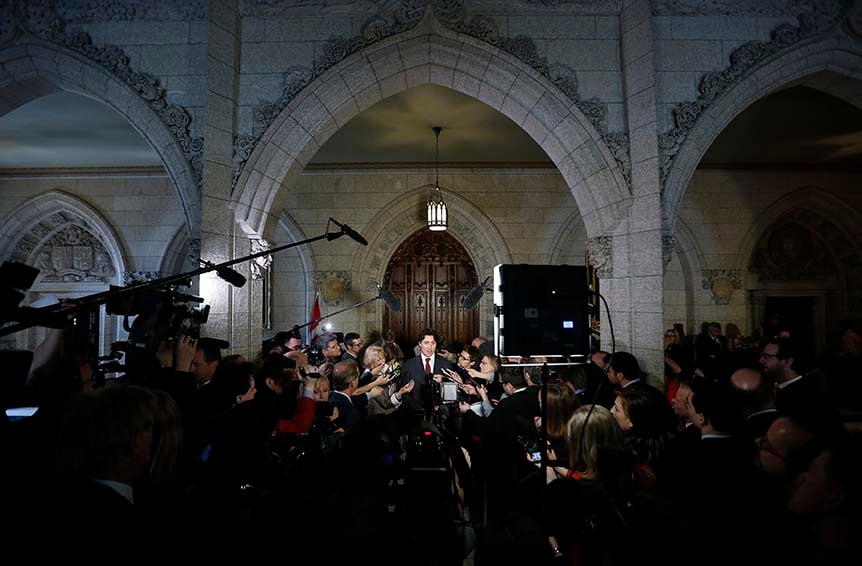 Liberal leader Justin Trudeau speaks to journalists in the foyer of the House of Commons on Parliament Hill in Ottawa April 15, 2013. (Chris Wattie/Reuters)

Justin Trudeau is Establishment now. Maybe it was inevitable, given who his father was, but when he became the Liberal party leader, he was supposed to be that most beloved thing in politics: a guy who pretends he isn’t a politician. No more of that. His manner of speaking is tougher; he interrupts Prime Minister Harper sometimes at debates, something that’s useless as a debate tactic but very good for showing off how grown-up you are. He had himself photographed in a gym, fighting in boxing gloves. Above all, there’s the hair. When he became the leader of the floundering Liberal party two years ago, his hair was longer, sometimes frizzier, always giving the illusion that he was too cool to cut it. Now he’s got shorter, slicker hair to go with his tougher manner.

As we get closer to the election, it seems Tom Mulcair, a man who has been in politics a lot longer, is the candidate of coolness and youth: he’s the one winning over young people by promising to repeal anti-terrorism legislation that Trudeau supported; he’s the one getting endorsements from performers like singer-songwriter Joel Plaskett. Trudeau pulled close to Mulcair in the polls by attacking him as a budget-cutter, the kind of attack that appeals more to the elderly than the young. He seems like a strong candidate now, just not a youthful one.

The Justin Trudeau of ancient times—the long, long-ago days of 2013, when he won his party’s leadership—was hoping he could win by being the opposite of a conventional politician. He even tried to turn the major line of attack against him, that he was inexperienced and unqualified, into a positive. An ad released by the Liberals in 2013, shows him turning off a commercial that begins, “Justin Trudeau, he’s in way over his head.” Trudeau, the “real” Trudeau, is in an empty classroom, not wearing a tie, sitting on the desk, owning the fact that he has more teaching experience than political experience: “I’m proud to be a teacher,” he says. He was saying that an experienced politician isn’t such a great thing to be.

John Duffy, a Liberal consultant and founder of StrategyCorp, dismisses the inexperience argument: “Whenever a candidate presents as fresh and different, as Trudeau has done, the go-to criticism is inexperience,” he says. Trudeau was chosen, after all—crowned, some people grumbled—at a time when there was a youth movement in politics, or at least a feeling that no one should ever sound old.  In the U.S., Barack Obama beat Mitt Romney in 2012 by turning the election into a sort of generational proxy war. “He’s the fifties, he is retro, he is backward, and we are forward—that’s the basic construct,” an Obama strategist told New York magazine that year. Obama appealed to what pundits dubbed the “coalition of the ascendant,” the more diverse generation that was due to take over soon. The media usually assumes it’s better to appeal to young people—why wouldn’t we, when young readers are worth more to our advertisers?—and a politician will get better coverage for attracting young crowds and giving off an air of youth. 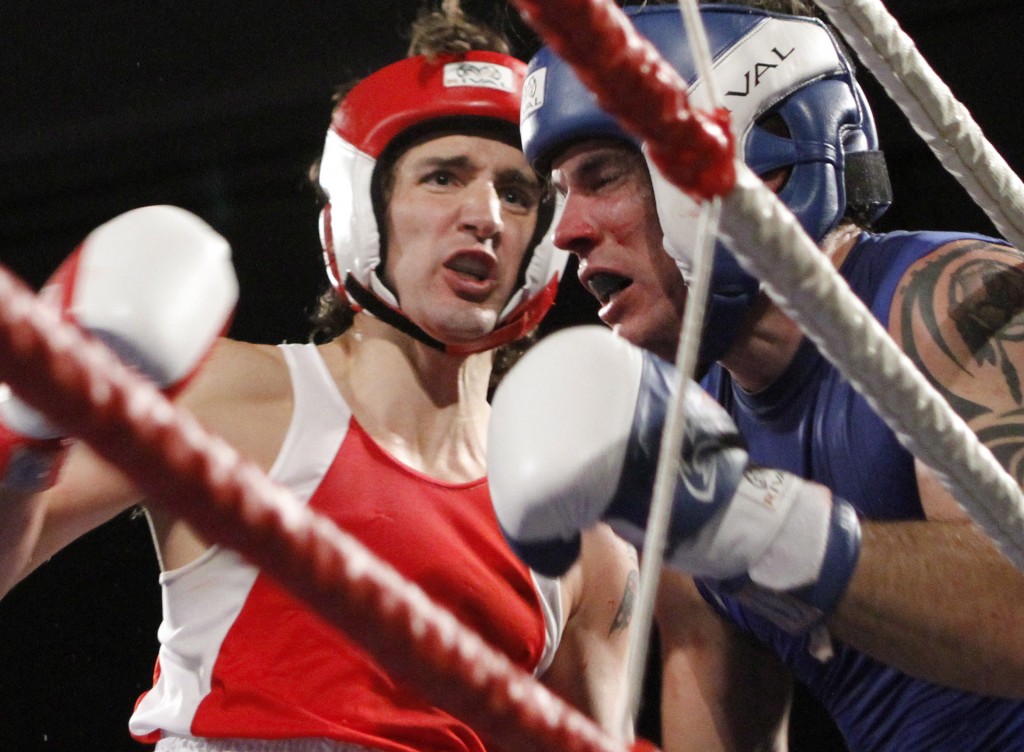 If you looked outside politics back then, you could see the yearning for youth. Movies and TV were looking for a type of leading man like Jake Johnson from New Girl or Adam Scott from Parks & Recreation—men not young enough to be boys and not mature enough to be men, not really comedians but funny enough to hold the screen with comedians—and, of course, with hair to die for. The 2010s became the era of the man-child, the nice guy who never became a boring adult like his parents. Judd Apatow built his movie career on this type of man, before moving on to women-children like Amy Schumer in Trainwreck.

Justin Trudeau was supposed to be Canadian politics’ answer to that trend. He’s always had to fight against the idea that he’s an affable man-child. He first came to public attention when he gave a moving eulogy at his father’s funeral, wearing a rose in his lapel like Pierre. He was almost 30 then, but looked younger, and his voice sounded even younger than he looked. He’s spent a lot of time trying to get away from the teen-idol image people projected on him, but in 2013, it was exactly what the Liberals were looking for in their attempt to win that generational war: if Harper was a ’50s type like Mitt Romney, then Trudeau was as close to Obama as they were going to get.

This strategy worked well enough to give him a consistent lead in the polls for the first two years of his leadership. And then in April 2015, something changed. “If you did a content analysis, you would likely see a very overwhelmingly positive media up until, probably, around April,” says Heather Bastedo, vice-president of the Angus Reid Institute. Then suddenly, right at that time, his polling numbers and his press coverage started to decline, almost at the same time, pulling each other down.

Nobody seems to know exactly why this happened. Pollster Nikita James Nanos says we need to look at “a combination of things: the debate related to [Bill] C-51, the public focus on the mission in Iraq, and also the attack ads from the Conservatives.” Apart from his support of Harper’s idea of anti-terrorism legislation—which marked him, in some eyes, as a sellout—none of these things seemed to make much difference individually; it’s hard to see why they all suddenly started making a difference.

But starting in April it was clear that the “inexperience” attacks, so ineffective against Barack Obama, were actually working against Justin Trudeau. The Conservatives ran an ad against Trudeau this year where he was dismissed as a “celebrity,” the same wording as in a 2008 Republican attack ad against Obama —but that ad bombed, while recent polls showed that the Tories’ line of attack hurt Trudeau’s standing.

Maybe the problem was just that he’d been around too long. Two years as Liberal leader isn’t a long time, but it’s long enough for the media and the public to get bored with him.

Plus the media and the public began to look more favourably on the NDP as the party of newness, not because of Mulcair, but because of other people who shared his party affiliation. Duffy notes that the election of the NDP government in Alberta “has invited a lot of Canadians to look at the NDP in a new way.” Bruce Anderson, chairman of Abacus Data, agrees that the rise of Rachel Notley “made people in other provinces feel more open to the NDP as an alternative government.” The people who stopped considering Trudeau cool may simply have found other people to focus on. “In some cases, it’s not that his numbers went down,” Bastedo points out; “it’s that people went somewhere else.”

And when you’re no longer new, the media turns on you pretty fast. Down south, the presidential campaign of Sen. Rand Paul (Trudeau’s exact opposite on policy, but a candidate of similarly boyish looks) seemed like he had a chance when reporters were buying into the idea of him as a libertarian youth candidate. They’ve stopped doing that, and his campaign has more or less collapsed. 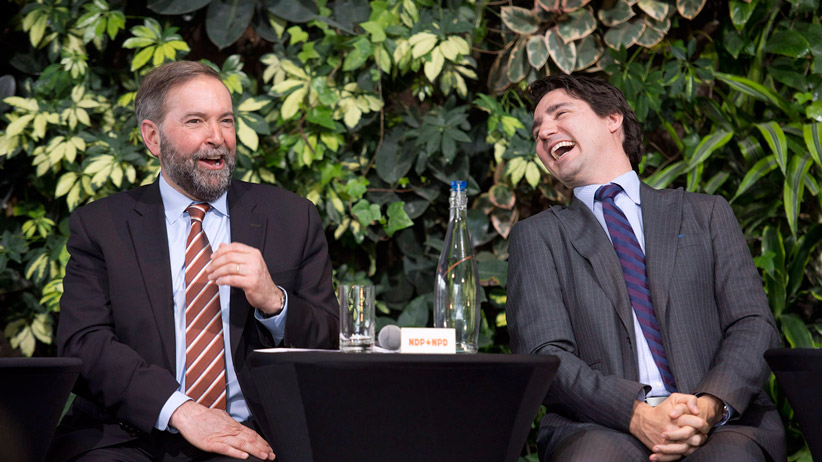 Trudeau has of course rebounded, and he’s done so by changing his image and positioning himself not as the youthful candidate of change, but the old-fashioned guy who stands against the technocrats of the Conservatives and NDP. He’s attacked both parties for being budget-cutting austerity advocates, and even gone against the usual practice of praising small business: “A large percentage of small businesses,” he told CBC’s Peter Mansbridge, “are actually just ways for wealthier Canadians to save on their taxes.” Both opposing parties attacked him for saying that, and that’s probably just what he wants. In 2013, he thought he could run against the other parties on optics; now he’s taking every opportunity he can to differentiate himself from them on policy.

Whether it can work may depend on just how much room there is, in Canadian politics, to set yourself apart on policy alone. Other countries are full of arguments on policy because they have big unsettled questions that the country cares about: health care in the U.S.; immigration in many countries. In Canada, there just isn’t a lot of room for any of that, because all the parties really do agree on a lot of things. “There isn’t obvious division when it comes to economic issues, that’s for sure. Let’s face it,” Nanos says. “The debate about the baby bonus is: for the NDP, yes, they’ll continue the baby bonus, and for the Liberals, yes, they’ll continue the baby bonus, just clawed back from affluent Canadians. There’s no real difference.” In Canada, what can Trudeau do to make us truly interested in him, except change his mannerisms?

So it’s possible that Trudeau has simply traded one set of optics for another. Instead of morphing from a young hippie teacher into a preppy-haired policy wonk, he’s adopted a more aggressive, stereotypically mature persona. The emphasis on policy may not matter a lot to Canadian voters, who don’t necessarily see a lot of divergence between any of the candidates on the issues that matter. But it does create the sense that he’s different from both Harper and Mulcair, and that’s something he needed to get back after his support of C-51 made him seem like a poor man’s Harper. “For a lot of Canadians,” Nanos explains, “one of the lenses through which they look at both Tom Mulcair and Justin Trudeau is, ‘How different are they from Stephen Harper?’ ” If Trudeau has revived his poll numbers and his media coverage, it may be because it doesn’t matter if you’re a rebel or an establishment figure—what matters most of all is that you’re different.

Trudeau rode to the leadership on a youth movement that may no longer exist. But none of that means he’s finished as a politician or a party leader; it just means he can’t be a novelty act any more. Establishment politicians can win, and sometimes, as we’re seeing with Mulcair, they can even recapture a sense of newness if things break right for them. The question is whether Trudeau can stay in the game long enough to get to that point.