Peter MacKay is in, Rona Ambrose is out and Stephen Harper goes after Jean Charest

Politics Insider for Jan. 16: The Tory hero makes a big move, Doug Ford pays parents for a teacher strike and maybe it's time for Trudeau to take on Trump 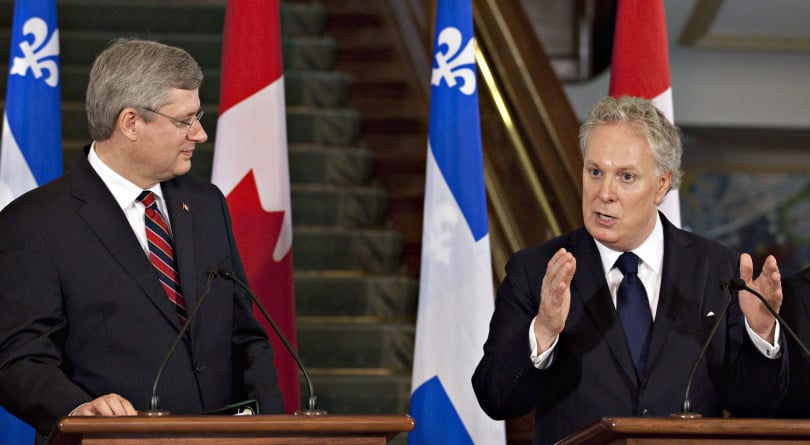 Conservatives will not remember January 2020 with even a hint of fondness. These are messy days for the Tories, and yesterday was one of the messiest. Paul Wells and Stephen Maher teamed up to break the news that Stephen Harper resigned from the board of the Conservative Fund, the party’s fundraising arm.

Harper abruptly quitting such an influential role in the party he co-founded was ground-shaking news in Ottawa. But only a few minutes after Maclean’s published the scoop came an update: Harper was cutting ties in order to thwart a potential leadership bid by Jean Charest, the former Quebec premier and latter-day Tory leader who left politics in 2012. Charest and Harper were once allies, write Wells and Maher, but they had a falling out in 2007 when Charest paid for tax cuts with billions in federal transfers. That Charest was a Liberal premier, of course, never helped matters.

A veteran Conservative source didn’t sugarcoat the party’s troubles: “The Fund’s in disarray.”

Who’s in and who’s out? The list of potential Tory leadership contenders saw a lot of movement yesterday. Let’s go from top to bottom: Rona Ambrose? Out. Peter MacKay? “I’m in. Stay tuned.” MP Ted Falk? Maybe in, then definitely out. If you’re part of any Tory group chats, now’s the time to check in.

The latest on Flight 752: Transport Minister Marc Garneau told reporters in Ottawa yesterday the feds will seek compensation for Canadian victims of the downed airliner. “One of the requirements from Canada’s point of view, along with justice, is compensation,” said Garneau. “Compensation to be provided by those that stand guilty of playing a role in this tragic accident. But let’s do the homework first.” [CBC News]

Foreign Minister Francois-Philippe Champagne confirmed that Canadian consular officials were on the ground in Tehran. “We have spoken to banks and insurance companies to facilitate assistance to the families and have reached out to airlines to begin discussing travel to and from Iran,” he tweeted.

Writing in Maclean’s, former air safety investigator Christine Negroni says people are the “greatest resource” in any post-mortem investigation. And if Iranian authorities throw the culprits behind bars, they could inadvertently jeopardize the probe into the crash. “When the threat of punishment is removed, people are more likely to talk about mishaps, misunderstandings, and yes, incompetence,” she writes. “These reports often reveal previously unknown hazards, and they in turn they can be addressed.” [Maclean’s]

Maclean’s columnist Tom Parkin says Flight 752 may force a confrontation, at least to some degree, between Justin Trudeau and Donald Trump. The U.S. president’s foreign policy has repeatedly thrown Canada under the bus, Parkin writes, and eventually the message-savvy PM will have to stand up for his country in the face of an erratic American leader.

That ground is worth standing on simply to recommit to Canadian values and honour flight 752’s victims. But it can also prepare ground for a sharp choice away from a president who–under impeachment and facing the electorate–may soon drag us deeper into his hellish vortex.

Free money: Doug Ford‘s provincial government ratcheted up the public relations battle with teachers who have commenced rolling one-day strikes across Ontario. Education Minister Stephen Lecce announced a plan to pay parents up to $60 per day, per child, to compensate for childcare costs when teachers walk off the job. Mike Crawley, the Queen’s Park reporter for CBC News, reminded taxpaying followers how the province could afford up to the price tag of up to $48 million a day: if the teachers are picketing, they’re not getting paid.

Speaking of taxpayers, most of us don’t want to foot any of the bill for Prince Harry and Meghan Markle‘s security costs if and when they semi-permanently move to Canada. So reports the Angus Reid Institute.

Some good news: Tareq Hadhad, a Syrian refugee who now lives in Antigonish, N.S., famously co-founded a sweets company called Peace by Chocolate. On Wednesday, he became a Canadian citizen. During the federal campaign last year, he wasn’t yet able to vote—but he told Maclean’s he can’t wait to cast a ballot the next time Canada goes to the polls.