Philippe J. Fournier: Short of a massive first-ballot lead, Peter MacKay is vulnerable and, without support from social conservatives, could lose the leadership 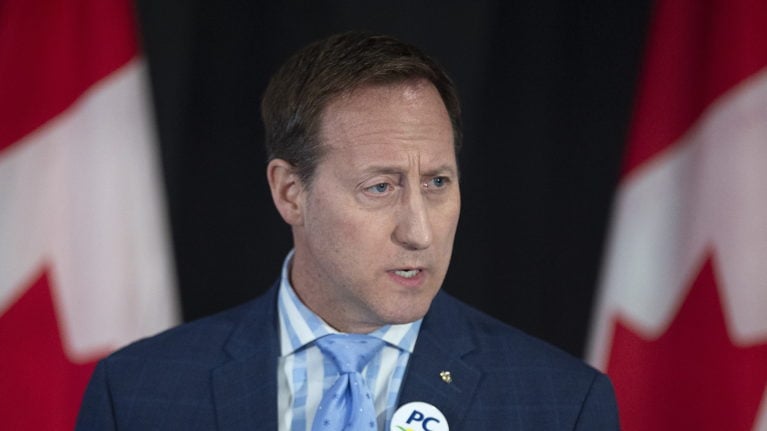 MacKay addresses the crowd at a federal Conservative leadership forum during the annual general meeting of the Nova Scotia Progressive Conservative party in Halifax on Feb. 8, 2020 (Andrew Vaughan/CP)

Last week, Mainstreet Research released its latest figures on the CPC leadership race and, according to this new data, Peter MacKay’s leadership bid may be in trouble. Let us recall that MacKay was hailed as the de facto favourite when the race began last winter, especially when other prominent conservatives such as Rona Ambrose and John Baird declined to run.

Before getting into the numbers, we should stress that this poll’s sample is not one that is representative of the Canadian electorate, nor of Conservative sympathizers, but rather of the Conservative membership itself, which will cast a vote on the new CPC leader in August. To the question: “As you may know, the Conservative Party of Canada will be selecting a new leader in August. If the vote to elect the next Conservative Party of Canada leader were held today, which of the following candidates would be your first choice?”, here are the results from all respondents:

While this may not necessarily be a poor result for MacKay (it adds up to 45 per cent of the decided vote), when we dig a little deeper into the numbers, we notice that getting to the 50 per cent threshold might not be an easy task. Let us not forget that according to the CPC leadership rules, each of Canada’s 338 riding gets awarded the same amount of points regardless of how many members live in each riding, meaning Calgary Centre gets the same weight as Outremont, and so it is crucial to dive into both the regional numbers and the members’ second choices.

Regionally, MacKay’s only comfortable lead in first choice votes lies in Atlantic Canada, where MacKay get 53 per cent of first place vote to O’Toole’s 20 per cent. However, Quebec and Ontario both show much closer races between the main contenders: MacKay and O’Toole are tied at 40 per cent a piece in Quebec (where fewer members were polled, so there is higher uncertainty), and MacKay leads Ontario by only six points over O’Toole (38 to 32 per cent). Since both candidates are statistically tied in the Prairies, Alberta and British Columbia, the regional distribution does not allow us to point towards a clear favourite.

The picture gets somewhat muddier when we break down the poll’s numbers for second choices. To the question: “And which of the following candidates would be your second choice?”, O’Toole comes first with 24 per cent to MacKay’s 18 per cent. At first glance, these numbers should suggest that MacKay would win just enough second place votes to win the leadership. However, and this detail is crucial : almost half of second choice votes for MacKay comes from O’Toole’s supporters (43 per cent), which obviously does not help MacKay’s candidacy at all since the race will most likely end up with a MacKay vs O’Toole vote.

So, should Derek Sloan finish last on the first ballot (which this poll suggests), Sloan would thus be eliminated from the leadership race and his supporters would then cast their lot behind their second choice. Here are the second choices of Sloan supporters from this poll:

Unsurprisingly, Leslyn Lewis—the other social conservative candidate in the race—racks up most of Sloan’s second place vote with 55 per cent. O’Toole comes in second place with 18 per cent, and MacKay finishes a distant third with only 7 per cent (and 15 per cent remain undecided). Such small a share of second place vote would most likely not be enough for MacKay to win, hence we would then need a third and final ballot.

With Leslyn Lewis eliminated after the second ballot, her supporters would then cast a vote for their second choice. Here are Lewis supporters’ second choices according to the poll:

These numbers are highly problematic for MacKay: O’Toole take three times more second place votes from Lewis supporters than MacKay does—40 per cent to 13 per cent. Of course, there still remains three months of campaign ahead, but according to the numbers, MacKay could very well fall short of winning the leadership if he does not secure a massive first-ballot lead. Ironically, MacKay—arguably the most progressive candidate in this race—will have to spend time and efforts this summer to convince the most conservative wing of the party to throw its lot behind him.

I ran simulations of the vote using Mainstreet’s numbers (and their uncertainty) and, should these figures be accurate, both MacKay’s and O’Toole’s ranges span from 47 to 53 per cent of points. At this point in the race, we can only conclude that it is a literal toss up.

And, so as it was the case in 2017, the Conservative leadership race could go down to the wire. Three years ago, Maxime Bernier led the crowded field of CPC leadership hopefuls for 12 consecutive rounds of voting, until he lost to Andrew Scheer by a score of 51 per cent to 49 per cent on the thirteenth ballot.

Will MacKay avoid the same fate as Bernier in 2017? We shall soon see. Conservative leadership candidates had until this Friday (May 15) to recruit new members for the Aug. 15 vote. The winner will be unveiled in the days that follow.

You can find Mainstreet’s full poll report here. Mainstreet polled 6,624 Conservative members on May 11 by using IVR technology (automated calls). The poll was commissioned by iPolitics and has a margin of error of ±2,6 per cent, 19 times out of 20.