Philpott and JWR: How the mighty have not yet fallen

Paul Wells: The two MPs are attempting to pull off the Jerry Maguire of Canadian politics by running as independents. The odds are long. 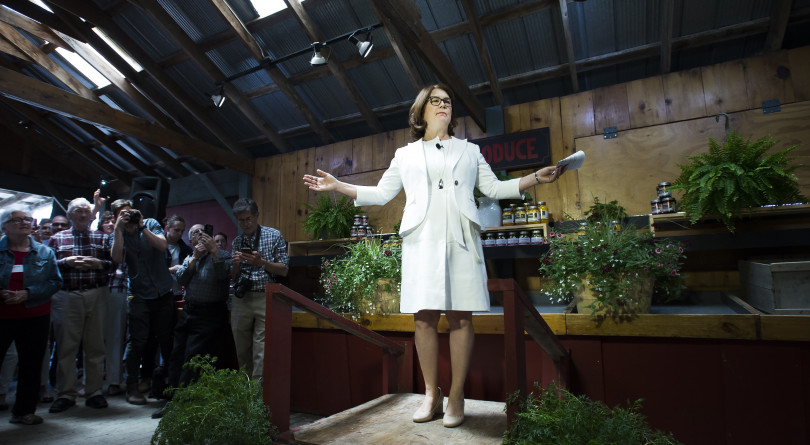 Philpott makes an announcement about running in the next federal election as an independent in Markham, Ont., on May 27, 2019. (THE CANADIAN PRESS/Nathan Denette)

Jane Philpott stood in white at a food store in her riding of Markham-Stouffville and proclaimed the revolution.

“I didn’t lose my voice,” the former minister of health, and then of Indigenous Services, and then President of the Treasury Board, and then of nothing but her will, told a crowd of supporters and journalists. “I found my voice.”

She’ll run for re-election as an independent this fall, she said. She will take donations immediately and start door-knocking this weekend. She will not run as a candidate for the Green Party, though she sure is impressed by Green leader Elizabeth May. She cannot run as a Liberal, by order of the party’s leader, Justin Trudeau, though she said the Liberals have, in many ways, “an awesome platform.” Basically there is nobody she is running against, it’s just that there is nobody she is running with either.

Actually, scratch that. She’s kind of running with Jody Wilson-Raybould, who had scooped Philpott by delivering substantially the same announcement a few minutes earlier in her riding of Vancouver Granville. The former Minister of Justice and Attorney General—once upon a time it felt stuffy to say the whole title, but given the recent SNC-Lavalin unpleasantness it seems germane—and then of Veterans Affairs, and then of nothing much, will also run as an independent. Like Philpott, Wilson-Raybould proclaimed her admiration for Elizabeth May while insisting she will not join May’s party.

Philpott, whom I like because she does not normally talk like a politician, was talking like a politician while insisting she no longer needs to sound like a politician. “There are no longer corporate lobbyists that are influencing the direction that I would go,” she said, and suddenly I had so many questions about the old days. “The only people that are the boss of me right now are you.”

“Suddenly, it was all pretty clear,” she said. “The answer was fewer clients. Less money.”

READ MORE: Jane Philpott: ‘We cannot ever be afraid of the truth’

No, wait, that last part wasn’t Jane Philpott. That last part is actually a quote from Tom Cruise as Jerry Maguire, from the “mission statement” the eponymous young sports agent writes in the opening scenes of Cameron Crowe’s 1996 film.

We know what happens to Jerry next. He carries the manifesto in a plastic bag in the middle of the night to a Copymat and prints up 110 copies. The cover is blue. The title is The Things We Think and Do Not Say. Everyone gets one in their mail slot the next morning, and by noon Jerry is fired, most of his clients have migrated over to creepy Jay Mohr, and Jerry’s on the street with a box of personal items, a goldfish and Renée Zellweger. I’m not sure in my analogy which of Philpott and Wilson-Raybould is the goldfish.

Usually around now, when I write something like this, somebody starts to call me cynical. And you can see how the thought comes up. Honestly I hope I’m only cynical. It will be grand if our two plucky independent MPs manage to outwit the party machines and shock this tired capital’s old habits and change everything forever. But I’ve been reviewing the precedent for such efforts, and I feel somebody should remind everyone that the reason the word “Quixotic” is still handy, 414 years after Don Quixote was published, is that the windmill is usually bigger than the knight.

It’s striking that most of the reforms Philpott advocated in her brief speech to constituents were process reforms. Maybe she and JWR could inspire others to speak their minds, colour outside the box, rebel against party strictures. Well, let’s see. Today the Liberals form Her Majesty’s government. After an election, they still might. Perhaps they will be reduced to a minority of seats in the Commons, in which case this government of political rookies will be living with the constant fear of defeat that defines minorities. In which case, every Liberal minister will say, on nearly a daily basis, “Let’s see now. I can continue to cling desperately to power, with the car and the driver and the office staff and the ability to get at least the odd bill passed through the Commons—or I could join Jody and Jane back there near the curtains, next to where Max Bernier used to sit. Hmm, that’s a stumper.”

Of course, most of the MPs in a governing caucus are back-benchers, not ministers. And at a moment like this there are two ways each of them can jump. Which is why the key scene in Jerry Maguire isn’t the scene where Jerry gets fired, it’s the one immediately afterward, where he tries to persuade everyone in the office to come with him. Renee Zellweger actually goes, so it turns out to be a pretty good movie. But in real life the rest of the firm stays put with creepy Jay Mohr and there’s no evidence any of them makes any less money for it.

In our remake, the rest of the firm is played by Yasmin Ratansi and Judy Sgro, Toronto-area MPs who are keenly aware that the continent-wide and ancient Liberal machine amplifies their modest gifts more often than it impedes them. They’re not tempted by the example of Philpott and Wilson-Raybould. They are contemptuous of it.

When you actually go through the list of people who’ve actually sat for any length of time as independents after having held prominent party posts, it is hard to stay excited about the prospects of such a path. Kids, ask your parents about Brent Rathgeber, John Nunziata, Pierette Venne, David Kilgour and other such. Lovely people in most cases, I hasten to add! But the system survived their efforts to colour outside boxes.

READ MORE: What Jody Wilson-Raybould and Jane Philpott can actually say—and where

There have been more significant independent MPs in history—Henri Bourassa as a nationalist thorn in Wilfrid Laurier’s side, Camillien Houde as a former Montreal mayor who got elected as an independent in the riding that would one day be Justin Trudeau’s—but they made their biggest marks outside elected politics. Bourassa founded Le Devoir after leaving parliament. Before he ran, Houde spent four years in a prison camp at Petawawa for urging Montrealers not to register for the draft. (Even as I write that sentence I have a hard time believing it. So often this is a stranger country than we permit ourselves to believe.) This is a handy reminder to all of us Ottawa denizens that the great fights are often fought outside politics, outside Ottawa. Maybe even usually.

As for the successful rebel movements within Canadian politics, they usually had strongly ideological causes to defend. The Reform Party, the Bloc Québécois. The process rebels tend to be lonely. “Let’s open up committee hearings” is not a cry to stir men’s blood. Mike Chong, the Conservative MP, is many columnists’ favourite reformer, but his favourite reform, the Reform Act, has had no discernible impact on the life of the nation. And even Chong stuck with his party rather than sitting as an independent. Of course Chong’s party did not force his hand in the matter.

Most of the things Wilson-Raybould and Philpott are proud of accomplishing in politics are things they did within the Liberal system of team play, massive help from the civil service, squadrons of communications assistants, and, yes, party discipline. It is to their honour that they walked away from all that because they didn’t like one of Justin Trudeau’s calls. But they walked away from it. Their lives since then will be seen by most of their colleagues as advertisements for sticking with machines, not for fighting the machinery.