Michael Robertson stood on Parliament Hill on Feb. 20, 1975. He was tethered to his friend’s truck, feet firmly locked into a pair of skis, with a hang-glider strapped to his back. With snow falling around him, Robertson’s friend gunned the engine and barrelled through a stop sign. A few seconds later, Robertson took flight. His hang-glider soared around the Peace Tower and landed on the front lawn. There, Robertson was immediately swarmed by Mounties. They let him go, unable to arrest him for anything, and didn’t even ticket his friend for running the stop sign. But Robertson got the attention of reporters. And he had plenty to tell them.

The high-flying gambit was the latest in a long list of quirky protests dreamed up by a stubborn group of rabble-rousers who lived on farmland northeast of Toronto. Three years earlier, the federal government decided that thousands of acres in the Ontario towns of Pickering, Uxbridge and Markham would make a fine spot for an airport, and Transport Canada expropriated 18,600 acres of land reserved for that purpose. The provincial government pledged to build infrastructure that would support the airport. Furious residents opposed all of it. They wanted the farmland, which is some of the best in Canada, protected. They wanted residents to live in peace, and homes to survive undisturbed. They called themselves People or Planes, and they took their fight to Queen’s Park. They staged a mock funeral for Mother Nature, and mock hangings of Premier Bill Davis and Prime Minister Pierre Trudeau.

These days, the vast expanse of land is eerie in places, dilapidated in others. People who still live there fiercely protect their homes, but there are fewer of them every year. As they leave, or die, their homes aren’t leased to new tenants. Transport Canada is in the middle of a long-term demolition project that’s spanned four decades.Not long after Robertson’s flight, the province announced it wouldn’t build the infrastructure to support the airport. The feds shelved their plans, but retained ownership of the Pickering Lands. The people who lived in the farmhouses and heritage homes that dotted the area remained tenants, paying rent to the feds. Two months ago, Finance Minister Jim Flaherty announced a new plan for an airport. Now, the NDP has jumped into the fray.

When homes come vacant, they slowly crumble until the feds send in the wrecking ball. Heritage homes built before Confederation vanish every year. In their place, empty lots grow over with weeds. Altona, Ont., a formerly bustling community along the Pickering-Uxbridge town line, is now a ghost town. Brougham, Ont., at the corner of Highway 7 and Brock Road, is on the way to a similar fate.

The number of buildings that have come down has increased substantially in recent years, after a lull between 2007 and 2010. In the past three years, Transport Canada got rid of 137 buildings. Many were clustered in the shrinking village of Brougham, the greatest concentration of remaining structures. But dilapidated buildings across the federally owned land were torn down.

Now, after years of uncertainty, and no serious attempts by the government to build a new airport, the residents are renewing their fight. A needs assessment made public in 2011 predicted that the Greater Toronto Area might require a second airport to augment existing capacity. The report suggested demand would overwhelm airports in the region between 2027 and 2037. Two years later, on June 11, Flaherty took ownership of the file. He stood at a podium in Claremont, Ont., and announced new plans to “protect land for a future airport” that covers about a third of the Pickering Lands. The finance minister never explicitly announced that an airport would be built, only that it could be built when required. “There will be land for an airport,” he said, choosing his words carefully.

Flaherty also pledged about 5,000 acres to a new Rouge National Urban Park, and suggested the remaining land would be subject to “urban and industrial development.” Transport Canada isn’t giving any hints about what that development might include, nor does the department provide any sense of when a decision will be made. “The Government of Canada is engaging stakeholders, businesses and local communities on the future of the remaining lands,” said a spokesperson.

Mark Holland, the area’s former Liberal MP, says there’s no business case for an airport in northern Pickering. He lost to MP Chris Alexander, the star Conservative candidate in Ajax-Pickering who’s now the minister of citizenship and immigration, in a contest where the prospective airport figured prominently. Both candidates promised to oppose the airport.

RELATED: Immigration Minister Chris Alexander, the area MP, is walking a tight rope in northern Pickering.
These days, People or Planes has been replaced by Land Over Landings. The new moniker reflects a subtle shift in focus. Activists used to focus on saving homes from demolition. Now, having largely lost that fight, remaining residents have turned their fight into an issue of food security. Farm the land, they say, and feed all of Toronto in the process.

The feds aren’t listening, but the activists haven’t given up. They recently caught the attention of the official opposition in the House of Commons. Local activists toured three NDP MPs around the sprawling area: Malcolm Allen, the party’s agriculture critic; Matthew Kellway, urban affairs critic; and Dan Harris, who represents a riding in neighbouring Scarborough. Before the tour, Kellway told Maclean’s about the importance of farmland so close to Toronto. “It’s fertile land, and it’s rare, and we need that land to sustain cities with the food that we eat,” he said, adding that the Pickering Lands sit on top of Class 1 farmland—the best soil in Canada. The Canada Land Inventory classifies a tiny percentage of farmland in the country as Class 1.

Mary Delaney, a resident of the lands since 1980 who co-hosted the MPs and NGOs who joined the tour, says the Pickering Lands are an issue of national importance. Representatives of the David Suzuki Foundation, Friends of the Rouge Watershed, Save the Oak Ridges Moraine, Green Durham Association and Food & Water First made the trip, and Delaney said the event served as a coalition-building exercise. “What we wanted to do was bring together the heads of these various organizations to show a united front. And we are a united front,” she said. “We’re all working for the same cause, which is protecting these lands.”

Beyond the airport and food-security debates, there’s also an ongoing conversation about the government’s conduct as landlord. Residents of the lands are limited to one-year leases, which some have renewed every year for decades. Until 2006, Public Works and Government Services Canada was the first point of contact for tenants. Many complained, and in 2006—after the Harper Conservatives came to power—Transport Canada subcontracted rent-collecting duties to SNC-Lavalin, a massive engineering and construction company, to deal directly with tenants. Broadly speaking, says Pat Valentine, vice-chair of Land Over Landings, those who pay rent are happier with their current subcontractor.

Those tenants, dwindling as their numbers may be, are a source of revenue for the government. Over the past decade, Transport Canada has collected around $3 million a year from the lands. Revenue fell from $3.8 million in 2002-2003 to $2.8 million in 2010-2011, before rebounding slightly last year.

Delaney claims the government rented homes at low cost and with very little screening, hoping the houses would be trashed and ready for demolition in relatively short order. Those early rents have increased incrementally, and more recent renters now pay market value. “All leases on the Pickering Lands vary widely based on any number of factors such as tenure, land use and workable acreage measurement,” said a Transport Canada spokesman, who added that the department currently leases 598 properties on the land.

A few million bucks a year is what Canadians are getting from their government’s continued expropriation of thousands of acres. For who knows how much longer, even that number will fall closer to zero. 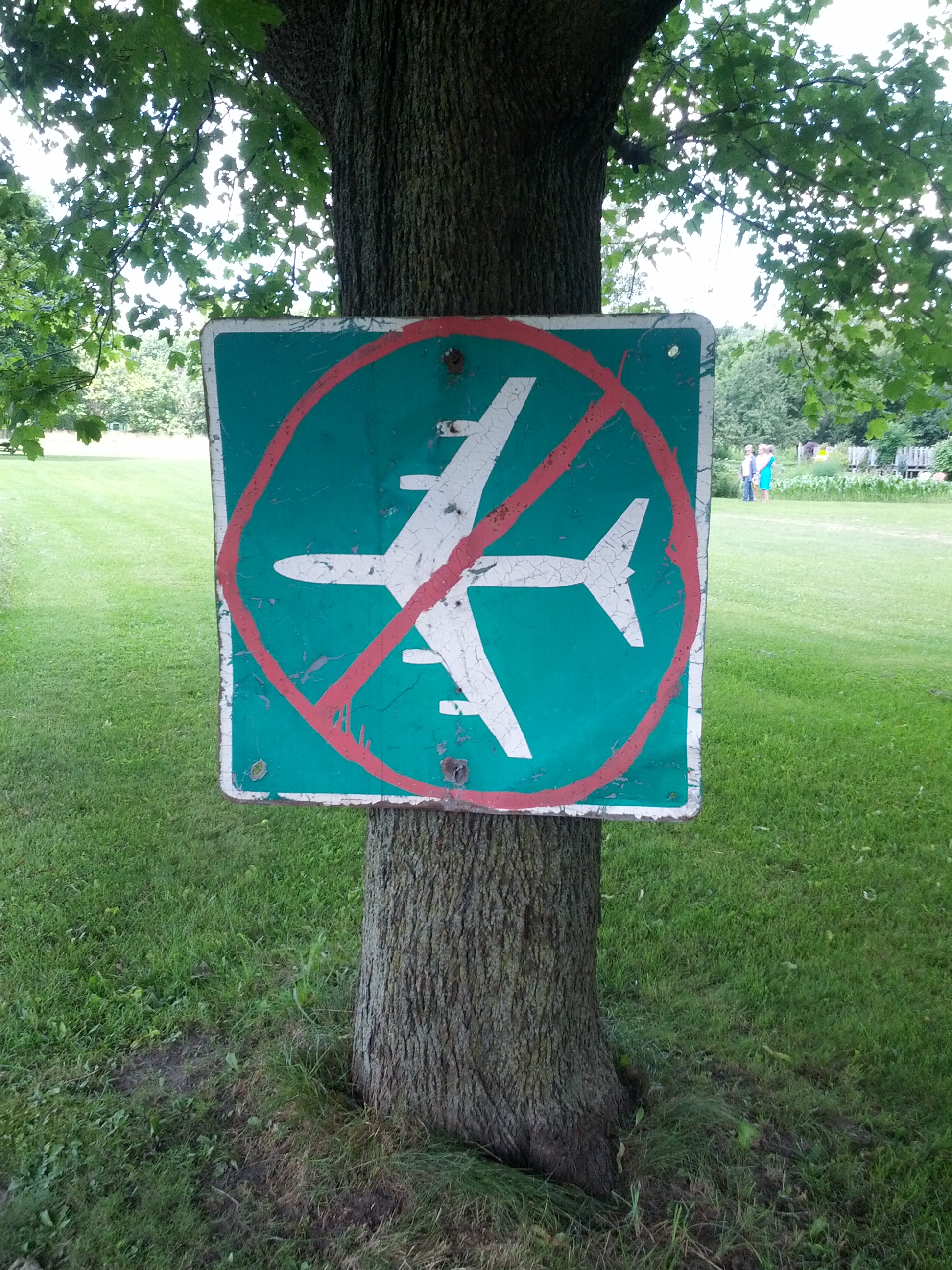 Gord and Myrna McGregor's home in Brougham, Ont., was expropriated in 1972, and they've been tenants ever since. One of the original People or Planes protest signs hangs on a tree near the McGregors' house, where passersby on Brock Road can't miss it.