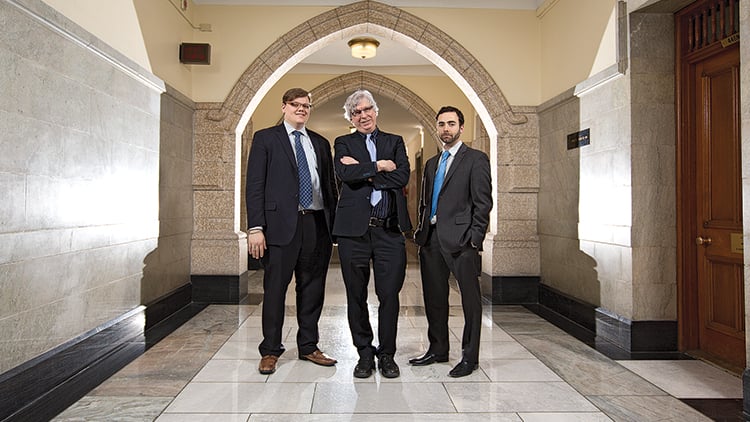 The job of the proceduralist, Rob Sutherland says, requires an “unbelievable attention to detail” and also “an ability to entertain paranoid fantasies, so that when you think they’re going to come and get you, you’re ready for every eventuality.”

The 54-year-old is the elder statesman of the NDP’s procedural team. The son of a former Ottawa city councillor, Sutherland studied music, but pursued politics, and first arrived on Parliament Hill in 1981, accumulating some 20 years of service since then as an aide to various MPs past and present. Sutherland, Jeremy Huws, the 33-year-old chief of staff to NDP House Leader Nathan Cullen, and Alex Telka, assistant to the House leader, a 29-year-old who started on the Hill as a parliamentary page, have helped lead the official Opposition’s efforts in the pre-eminent fight of the last month: Bill C-23, the Fair Elections Act.

The trio are responsible for understanding the finer details of how this place works—the arcane system of formalities, rules and precedents that has evolved over the centuries to organize our representative self-governance. The average MP cannot be expected to be familiar with the darkest corners of House of Commons Procedure and Practice (1,471 pages) or the Annotated Standing Orders (632 pages), and so the likes of Sutherland, Huws and Telka exist to advise and guide. Each side has its team of dedicated rules-minders. (Sutherland likes to read the guide to procedure and practice at the cottage and says that every time he rereads a section he finds something new.) Some of the job involves merely ensuring that the House’s affairs proceed each day. At other times it means advising on the finer points of procedural battle.

Of late, the House has been dominated by the technical drama of manoeuvrings related to C-23. When the government sought to move a motion of time allocation—a measure that establishes a specific time limit for debate—the NDP responded with a series of moves to delay and frustrate the process: a motion for concurrence, a motion that a member now be heard, a motion to adjourn. When the Conservatives refused to agree to an NDP demand to hold hearings on the bill outside Ottawa, the NDP responded by launching a filibuster and denying unanimous consent to a typically perfunctory motion in the House to approve travel for other parliamentary committees. The decision to fight was made by the NDP caucus, and it was then for Sutherland, Huws and Telka to advise the caucus on options. “We were essentially given our marching orders: that we’re to look for all opportunities to shine a bright light on this, because if it goes through quietly then we’ve failed,” Huws explains.

The procedural battle is equal parts hallowed tradition and partisan interest. Telka notes with some interest that a friend asked him about the Fair Elections Act at a bar the other night—a suggestion, perhaps, that all this fussing is succeeding in drawing attention. “In the House of Commons, there are rules, there’s exceptions to the rules and then there are exceptions to the exceptions,” Huws says. Adds Sutherland, “And we always have to be aware that there’s a team, bigger than ours, on the other side, who’s doing the exact same thing at the exact same time. So it’s like big three-dimensional chess, sometimes.”