There once was a farmer with a field to plow and a statement to make. The farmer was John Langs of Burford, Ont. The field was rye, and the statement did not favour Stephen Harper. “I just decided to get a little creative,” says Langs, 57. As he set out to harvest his field, which he does every fall, he remembered a “young farm lad” nearby who had plowed a marriage proposal into his field for his girlfriend. Langs teased his wife about using the same technique to create the country’s largest political yard sign.

No sooner did Langs climb aboard his tractor, towing a disc on the back, than he began eyeballing his way to create a series of 100-m-tall letters spelling, “ANYBODY BUT HARPER!!” It took 45 minutes. Langs is a retired food inspector with the federal civil service. “I’m used to not being able to express my opinions,” he says. “I’m not a fan of Harper. Never have been, never will be.”

Two weeks later and three provinces west, another farmer, Bill Tamminga of Cranford, Alta., saw an image of Langs’s field on Facebook. “That got me going,” says Tamminga. “I thought it would be good to give a positive message and make sure people vote for the right guy.” Tamminga, 52, called upon an employee, along with his son-in-law, to help. Tamminga had plowed his potato field with letters on a previous occasion, writing an amazing race clue for his church’s youth group. “The fields give lots of opportunity to play around,” he says. “It doesn’t cost much. We have to plow anyway.”

On a rainy morning, Tamminga’s team mapped a route with a GPS and spent 2½ hours plowing their own series of letters, these ones about 150 m tall, to spell “HARPER.” The next day, they added a tick box with a checkmark to emphasize their encouragement to vote. 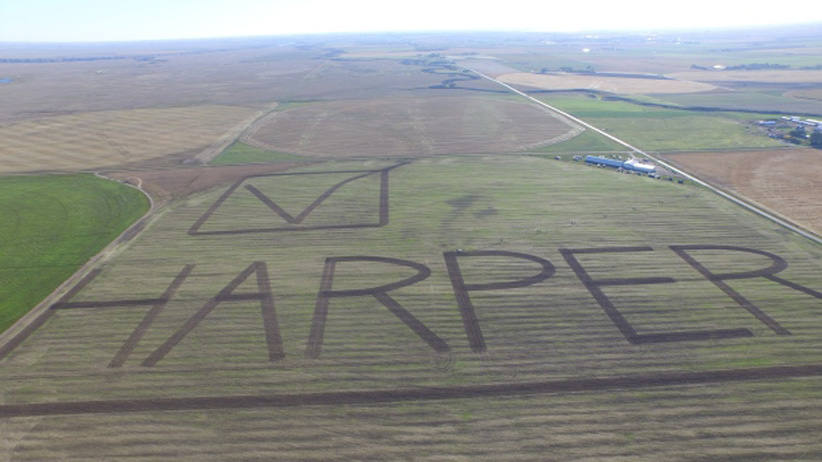 Back in Ontario, Langs watched Tamminga steal the attention. “He copied me,” says Langs, “but imitation is the sincerest form of flattery.” While Langs says Harper “hasn’t been a friend to farmers—or anybody,” Tamminga holds that the Prime Minister “has a heart for Canada.”

Both farmers say their fields get plenty of air traffic. Langs’s field is just 10 km from the Brantford Municipal Airport, while Tamminga’s land is about 45 km from the Lethbridge County Airport. Langs erased his statement on Oct. 18 by plowing the rest of his field. Tamminga, on the other hand, will keep “HARPER” in his potato field until the weather forces him to finish plowing. He may use his other fields to write future messages in support of God or to express his pro-life stance. “Who knows?” says Tamminga. “Messages like that have crossed my mind.”