PM to Canadians: You never write, you never call ...

UPDATED! Scroll down for details.

Was just going through the most recent batch of departmental performance reports – shut up, I do too have a life – and I came across this huh-provoking nugget from the Privy Council Office: 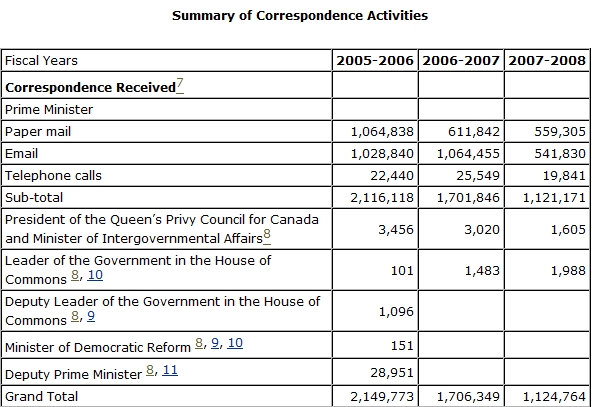 According to this chart, the amount of email received by the Prime Minister’s office appears to have plummeted since 2007, when the Langevin mail server processed a total of 1,064,455 messages to Stephen Harper, to just 541,830 e-missives last year; the amount of “paper mail” and phone calls has dropped as well, although not nearly so sharply.

ITQ has no idea what, if anything, this may indicate about the mood of the public, but it seems as though it must mean something, doesn’t it — he’s doing such a bangup job that fewer disgruntled voters feel the need to fire off a harshly worded rebuke, perhaps — or, alternately, perhaps mindful of his apparent reluctance to heed the advice of even senior cabinet ministers and advisors, they figure it’s just not worth the effort.

Meanwhile, over at the office that was, until late last year, inhabited by the face of parliamentary hyperpartisanship, Peter Van Loan – then, of course, the Government House Leader – nearly decupled in 2007, and went even higher the next year. Why? Well, ITQ has a few ideas, but we invite readers to share their own theories in the comments. 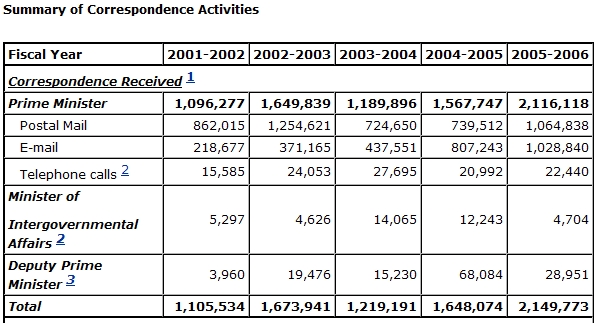 FILED UNDER: dear stephen ... fun with departmental performance reports not looking into the abyss privy council dead letter office the van loan warrior will not soon be forgotten