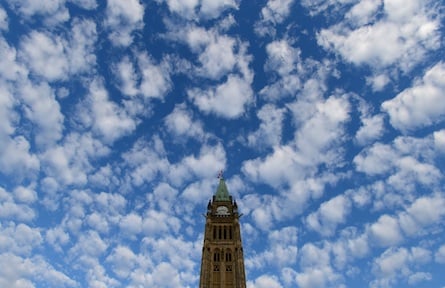 On Saturday afternoon, Frank Graves, CEO of the polling firm Ekos, stood in front of a couple hundred Green delegates to tell them what they did wrong last October. He opened with a joke: “Ottawa feels a little less like Mordor, and a little more like Camelot,” garnering a laugh and applause. His speech, on day two of the party’s three-day biennial convention, looked at trends among party supporters. (Those supporters, he noted, are younger, more cosmopolitan, economically vulnerable and civically engaged.)

Maclean’s sat down with Graves just before the conference to discuss what the Greens need to do to have a future in Canada. What follows is a summary of the recommendations he shared on Saturday:

1. Electoral reform is “absolutely critical” to the future of the Green Party of Canada.

The Trudeau government has promised electoral reform. Graves said the solution to the Greens’ lack of representation at a federal level lies in a switch from the first-past-the-post system to proportional representation. According to Ekos, up to 10 per cent of Canadians have said they would vote for the Greens if an election were held tomorrow. But because the election results were driven largely by strategic voters looking to get Stephen Harper out, Green supporters shifted right and gave the Liberals their ballot, giving Greens only 3.5 per cent of the vote. “It also killed the NDP, but it really really hurt the Green party,” Graves said. “They were looking like they could win three seats in B.C., at least, and it all collapsed in the final stages.”

MORE: The Greens want electoral reform. It’s no surprise why.

In a proportional representation system, that 3.5 per cent support would have translated into 12 seats for the Greens, instead of the one its leader, Elizabeth May, now holds. “If [electoral reform] doesn’t happen, then they have a daunting challenge,” Graves said. “It’s really tough to push that boulder up the hill when in three elections the Green party vote is defected.” He added the Greens would also do better under a preferential ballot electoral system compared to first-past-the-post.

“Quebec and B.C. are by far the most progressive and most environmentally concerned parts of Canada,” Graves said. Much of the Green support is regionally concentrated in B.C. “They have to probably figure out how to really focus their efforts in micro-regions, instead of running a national campaign.”

3. Keep the focus on environment, but avoid being a “one-trick pony.”

Ekos has done long-term tracking of public attitudes toward the environment. When asked where the federal government should increase its involvement, environment comes out at the top, with 65 per cent. “They have to take advantage of this pretty profound rise in support in dealing with climate change even if it means this costs money,” Graves said.

The problem, he added, is that if electoral reform does happen, and the Greens suddenly becomes a force in politics, people will become more critical of the other aspects of its platform. Ekos found that while the Greens score well on its environmental platform, it doesn’t do well on other issues, including the economy.

4. Get on board with “bumper-sticker” messaging.

Graves said progressive values have been on the rise in Canada during the past 20 years. He said the Greens needs to tap into the simple, value messaging that more conservative parties use to appeal to voters. “So things like the bumper-sticker simplicity of, ‘Lower taxes, less government = prosperity for all’ will often win in that kind of environment because they’re strong values appeal and they’re simple and they’re repeatable,” he said.

Graves said one of the core values of Canadians is environmentalism, so if the Greens could frame their proposals in a way that was simple, yet emotionally resonant, it could improve support. “They have to convince people they can actually make a difference in advancing those values.”

5. Take advantage of the NDP’s “crash and burn.”

In October, the NDP walked away with just 20 points. Graves said if you take the labour-movement vote out, they would have only had 12 points. “Maybe the Green party has to think of a more pro-labour approach,” he said. “They’re politically influential. Maybe they should try and forge some relationships with the labour movement.”

He said the Greens also need to take advantage of “promiscuous progressive voters”—voters who don’t care whether it’s an NDP, Liberal, or Green government, as long as it’s progressive. According to Ekos, one in 10 voters would choose the Greens as their second choice. “If the NDP are really on the ropes and fading, the Greens could become a more plausible alternative progressive party to vote for, which is where the NDP have been.”