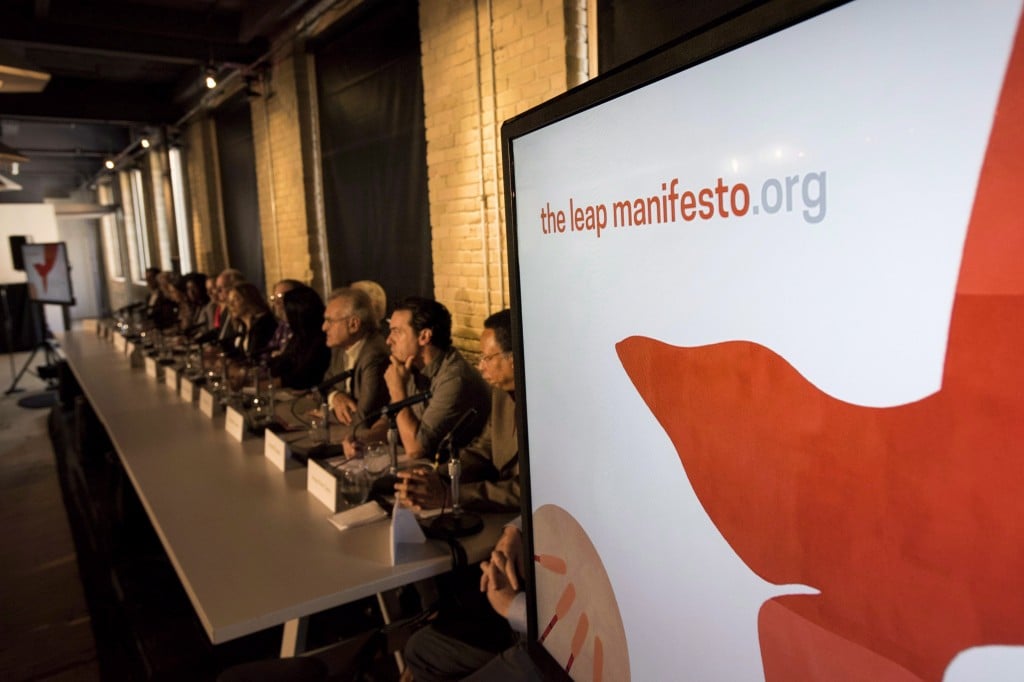 Actors, activists, and musicians launch the Leap Manifesto outlining a climate and economic vision for Canada during a press conference in Toronto on Tuesday, September 15, 2015. THE CANADIAN PRESS/Darren Calabrese

OTTAWA – Backers of the radical “Leap Manifesto” have come up with a two-step plan aimed at getting federal New Democrats to end their flirtation with mainstream moderation and sign on to a more left-wing agenda.

The manifesto calls for dramatic change, urging a swift transition away from fossil fuels, a rejection of new pipelines, and an upending of the capitalist system on which the economy is based.

Leading left-wing thinkers released the creed in September in the middle of the election campaign, jolting NDP Leader Tom Mulcair as he attempted to convince Canadians that his party was a safe, moderate alternative to the Conservatives.

Now, as Mulcair’s leadership is up for debate and the party questions its own identity and direction, key New Democrats are pushing the Leap Manifesto principles into the mix.

Former MPs Libby Davies and Craig Scott, as well as the head of the influential Toronto-Danforth riding association and documentary filmmaker Avi Lewis, are circulating a plan to entrench the manifesto’s ideas.

But they don’t foresee a wholesale adoption of the manifesto all at once.

Rather, they’re proposing a two-step process: first, have New Democrats at this week’s convention approve a resolution declaring that the manifesto is “a high-level statement of principles that is in line with the aspirations, history and values of the party.”

If that passes, they’re proposing another resolution calling for meaningful debate of the manifesto by riding associations, leading up to a full, detailed discussion on how to implement it at the next convention in 2018.

“We agree that the time is clearly right to embrace the analysis and values in the manifesto, but we believe that the party also needs a chance to debate and articulate the many policies that flow from it,” says a letter set to be circulated to rank-and-file NDP members at the Edmonton convention, a copy of which was provided to The Canadian Press.

“In other words, we believe the NDP needs to take some ownership over this agenda through a democratic process.”

In an interview, Lewis, one of the key drivers of the manifesto, said there also needs to be an online mechanism to allow members to have a strong voice in the policy-making process.

Nearly two dozen NDP riding associations have drafted their own resolutions urging the party to embrace the manifesto as rank-and-file members mull the future of the party following October’s disappointing election results.

As a result of that increased interest, Lewis said he worked with Davies, Scott and others inside the NDP to help craft an appropriate procedural path which they hope will lead to eventual acceptance of the manifesto.

The letter predicts the manifesto can “play a key role in the renewal of the NDP, rooting the process in a bold, inspiring, left vision of Canada.”

“We also think the manifesto can play a part in strengthening party democracy, transparency and grassroots involvement in policy-making.”

Among other things, the manifesto declares that no further money should be invested in building fossil fuel infrastructure, such as pipelines. Lewis acknowledged that could prove a difficult sell, particularly with the convention being held in oil-rich Alberta.

“The (provincial) NDP government in Alberta feels that being against pipelines is a no-go zone,” Lewis said.

“In fact, the premier of Alberta speaks about climate change and pipelines in the same breath every time she talks about their climate change policy … She always points out that this will give the province the credibility to get its bitumen to tidewater.”

But it’s not just Alberta New Democrats who might have a problem with the manifesto. Former Nova Scotia MP Peter Stoffer, who calls himself a “firm supporter” of the Energy East pipeline proposal, said the manifesto is unrealistic and too far to the left.

“I would definitely love to see the day when we as a society can wean ourselves off fossil fuels but that is not going to happen tomorrow,” Stoffer said in an interview.

In the meantime, Stoffer said he’d prefer using Canadian oil and gas to heat his home or power the planes he flies on.

“At the end of the day, you still have to support our basic economies in this country and use our resources as environmentally friendly as you can for the benefit of Canadians as well.”

When the manifesto was released during the election campaign, it was a stark contrast with the cautious platform Mulcair was offering voters, including balanced budgets and sustainable development of Alberta’s oil sands. He didn’t embrace the manifesto but said he appreciated the debate of ideas.