Three prime ministers have represented the riding of Prince Albert. But only one of them, John Diefenbaker, gets any real respect. 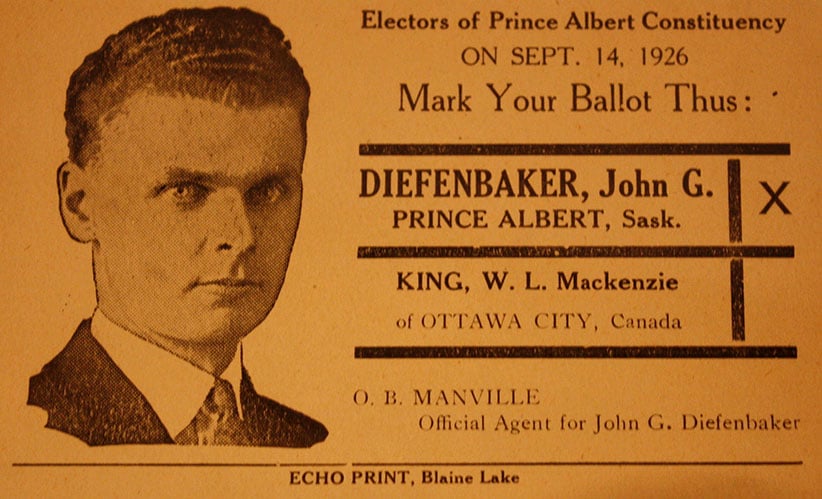 As MPs went around the table for introductions at the last Parliament’s first Finance committee meeting, Randy Hoback indulged in a little name-dropping.“My name is Randy Hoback. I’m the member for the great riding of Prince Albert, home of John G. Diefenbaker and a few other prime ministers,” the Saskatchewan Conservative said.

Perhaps he didn’t mention the other two PMs of Prince Albert in order to keep his remarks short. It’s not because they’re obscure historical figures; fellow committee members would have found the other names in their wallets, on the $5 bill (Sir Wilfrid Laurier) and the $50 bill (Mackenzie King).

But Dief the Chief is, without doubt, royalty in this north Saskatchewan city. His former house is a museum, and there’s a Diefenbaker bridge, school and statue outside city hall. He was MP for Prince Albert from 1953 until his death in 1979, and the residents alive in that period who don’t have a personal memory of the man will claim something close. Even local NDP candidate Lon Borgerson occasionally highlights Diefenbaker’s record in order to argue how far the Harper Conservatives have strayed from the local guy’s brand of progressive Toryism.

The two Liberal prime ministers did not live in Prince Albert; they only ran here. Before parachutes had planes to drop out of, Laurier won the district in 1896 and, 11 days later, became prime minister. He also ceased to be Prince Albert’s MP, because in those days, politicians could hedge their bets and run in multiple ridings. Laurier had also run in his native Quebec City, and chose to represent only that city.

Decades later, Mackenzie King also chose Prince Albert strategically, seeking to boost the Liberals’ standing in the West. After he won a 1926 Prince Albert by-election, he kept running as long as locals would have him. That turned out to be 1945, when the CCF swept Saskatchewan, and the prime minister retreated to an Ontario by-election.

King claimed to be a “spiritual westerner,” but opposition charges that he was an absentee MP long dogged him. Still, his local party machine proved strong, and good enough in one early contest to defeat a 31-year-old Conservative lawyer named John George Diefenbaker. There are no monuments to King’s tenure in Prince Albert, but there is a short Laurier Drive. There’s also Prime Ministers’ Park, commonly misspelled online as Prime Minister’s Park.

Diefenbaker’s past here is felt, while the others seem to exist as trivia.“I don’t know if it’s because they were carpetbaggers or it’s that no one really knew them,” says Dennis Ogrodnick, high school history teacher and president of the Prince Albert Historical Society.

This year, Gordon Kirkby, former city mayor and Liberal MP from 1993 to 1997, is again bearing the standard of King and Laurier. But he also says he’s more likely to cite Diefenbaker’s Canadian Bill of Rights when invoking local heritage, or Pierre Trudeau’s Charter to remind people of the Liberals. Ogrodnick is a local NDP activist, but regularly extols the Chief’s virtues, “to the chargin of my New Democrat friends.” (As for Hoback’s views on his city’s PMs, a spokeswoman for his campaign said he would only speak on the subject after the federal election.)

Kirkby laments the lack of local resonance for all three Prince Albert PMs. “I think it has something to do with the kind of instant society we have, looking for the next bit of excitement rather than remembering,” he says. There was a short-lived attempt last decade to name three sports fields in Prime Ministers’ Park as Diefenbaker, Laurier and King. Ogrodnick’s society will try to highlight all three next year during the city’s 150th birthday, as well as in 2017 when Canada reaches that milestone. To Ogrodnick, it’s a way to bring Saskatchewan’s third-largest city some respect. “It’s something to say to Easterners: ‘Hey, we’ve had three PMs here,’ ” he says.

As with nearly all the rural Prairie seats, Prince Albert is likely to go Conservative. The riding will do its bit to prevent Justin Trudeau or Tom Mulcair from becoming the third prime minister to hail from Montreal, after Pierre Trudeau and Paul Martin.