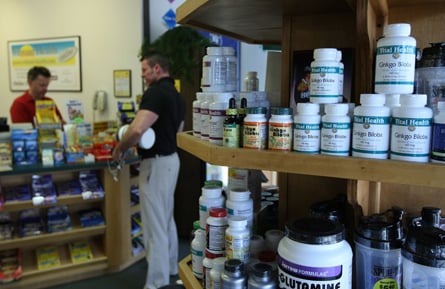 The Canadian Health Food Association today launched a campaign aimed at bringing political attention to the regulatory mess their industry confronts. It’s an issue that few Canadians know anything about, but one that should be of interest to the millions who buy natural health products—from mild teas, to ordinary vitamins, to potent exotic substances.

The numbers tell much of the story about what’s got the association worried. According to the CHFA, 13,000 licences for natural health products have been issued by the federal National Health Product Directorate since the government moved to regulate this booming category of quasi-drugs six years ago.

But the directorate, run by Health Canada, has refused about as many applications, or the companies trying to get the products licenced have withdrawn their applications in the face of the directorate’s demands for more information. This pattern bodes ill for the government’s goal of having all natural health products on the market—an estimated 40,000 of them—properly licenced by next April.

As of today, the CHFA is urging its member companies to contact their MPs, the Prime Minister, or Health Minister Leona Aglukak. They fear that many of the products they now sell will not be licenced by next spring’s deadline, and therefore “availability of new NHPs will be significantly reduced.”

I’ve written twice about Ottawa’s trouble-plagued efforts to regulate the natural products sector, in 2005 and 2007. Both times I talked to advocates and critics of the regulatory system. I concluded that, at root, the problems flow from the contradictions inherent in trying to bring quasi-scientific regulation to an industry that’s based on unscientific folklore.

The 2004 federal regulations allow products to be licenced based, not on clinical research, but on traditional claims. That’s right: products can obtain a federal licence number—what surely looks to consumers like a government seal-of-approval on the label—on the basis of old beliefs. Clinical evidence is considered where it exists; but for most natural health products the foundation for federal approval is research into traditional uses in non-Western healing.

Critics like the Centre for Science in the Public Interest have justifiably taken aim at Health Canada for licencing products based on dubious traditional uses, such as “heart-health claims for garlic and menopause-relief claims for black cohosh when scientific evidence indicates both substances are no more effective than placebos.”

It has never made sense to me that Health Canada is validating traditional-use claims. Health Canada should be in the business of applying science to regulation. And it’s impossible to reconcile the two ways of looking at a product meant to make a person healthier.

(I do think it is enormously valuable that the Natural Health Products Direcorate has taken decisive action in cases where a natural product poses a clear health risk, as when it banned combinations of derivatives of the herb ephedra, known as ephedrine, with stimulants like caffeine, after research showed risks ranging from heart-rate irregularities to seizures.)

I wonder if the Canadian Health Food Association has thought this through. It’s campaign aims to get MPs, the PM and the health minister thinking hard about their industry’s regulatory woes. But maybe the politicians won’t come to the conclusion that licencing should be somehow expedited. Maybe they’ll conclude that the regulatory approach was flawed at the outset and should be overhauled, even tightened.

Whatever happens next, it obviously isn’t acceptable for a backlogged, confusing, possibly unenforceable, arguably indefensible, regulatory regime to go lurching along indefinitely. It’s not fair to the industry making these products or helpful to consumers.