On the threat of terrorists from Canada entering the U.S. 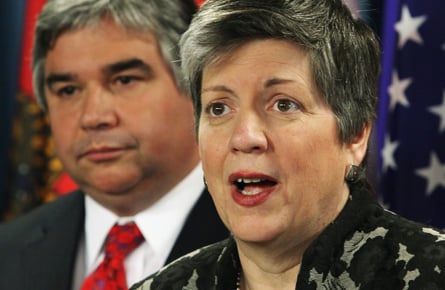 You’ll recall how last month Napolitano told CBC that some of the 9/11 terrorists snuck into the States from Canada. She was, of course, trading in an outrageous myth that’s been enormously damaging to Canada’s interests. But that, apparently, is beside the point.

You’d think the cabinet secretary responsible for U.S. security would have been embarrassed to be caught out having such a tenuous grasp on how the most catastrophic event in recent U.S. history unfolded. Not really.

Rather than hanging her head in shame, Napolitano followed up by allowing that she wasn’t quite correct on the details of Sept. 11, 2001, but she was right on her underlying point that Canada is a haven for dangerous nuts. “The fact of the matter is that Canada allows people into its country that we do not allow into ours,” she said.

Now, shouldn’t that have settled matters? Apparently it didn’t. This morning on her visit to Ottawa, Canadian reporters were bumptious enough to ask Napolitano about her little 9/11 slip-up.

“Let me say once again that we know and I know that 9/11 terrorists did not cross the Canadian border,” an exasperated Napolitano replied. “I regret that the Canadian media only seems to hear that, an earlier misstatement by me to that effect.”

Van Loan graciously rose to his guest’s defence, declaring that he had accepted her earlier correction of the record and moved on. He even took pains to mention a few details, which, in the context, leave little doubt that he thinks Napolitano’s view of Canada has considerable merit.

“There are very real terrorist threats and some of them, we have to confess to ourselves in Canada, are homegrown,” Van Loan said.

“We just had the successful conviction of Momin Khawaja, who was involved in Islamic extremism, developed a remote detonator device, was linked to the London bombers. That’s evidence that we do not ignore. We have the same with the first convictions in the Toronto 18 terrorist plots.”

So to recap: Napolitano misspoke about 9/11 but knew her stuff when it comes to Canada as a likely haven for terrorists. Reporters here were way out of line in bringing up her 9/11-Canadian-connection remark as she visits Canada a few weeks later. And, anyway, Canadians should face up to their frightening homegrown terrorism problem.

At the risk of seeming like I haven’t been paying attention, let me suggest another perspective: Napolitano’s 9/11 gaffe is about the most alarming falsehood a senior U.S. official could blurt out about Canada, and her underlying sense of Canada as a den of bad guys borders on paranoiac. Reporters here would have been grossly negligent had they failed to try to sound her out on this today. And evidence of Canadian homegrown terrorism puts Canada in about the same category as the U.S., Britain, France, and just about any other reasonably open democracy.