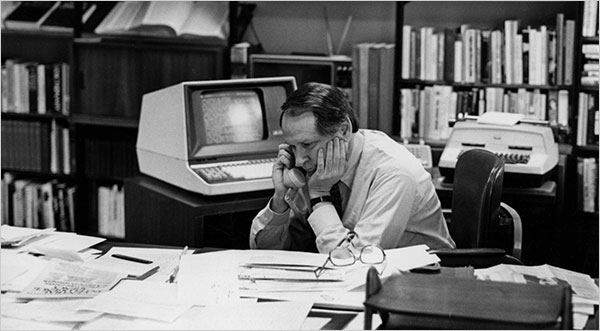 They don’t give you an instruction manual when they give you a political column, so in 1997 when The Gazette gave me one (it was extortion; I was threatening to quit) I looked around for my own models. William Safire, the great New York Times columnist who died today at 79, was one. Emulating him was healthy for the same reason it’s okay for a saxophonist to try to play like Sonny Rollins: Because you can’t, but in trying you will push yourself past whatever was blocking you before.

Safire had strong opinions but there was no club whose members were immune from his criticism, nor any that would forever be denied his praise. I am pretty sure he voted for Bill Clinton in 1992, though not in 1996. His example pushed the Washington Post to go get their own conservative columnist, a tweedy kid named George Will. He came to journalism from outside — he was a Nixon speechwriter — but he cared more than most of us about the only tools we will ever have: the techniques of the reporter and the English language.

He was a playful columnist. After Nixon died, Safire filed occasional phone interviews with his old boss from Heaven. His “reading X’s mind” columns, in which he would write in the first person about what some great figure must be thinking, were not fanciful, the way young Dowd would write them, because Safire reported those pieces exhaustively before launching into his voice-appropriation thing. And his annual Office Pool quizzes were awesome displays of polymath showing-off.

Safire trusted his gut and his voice, but never let tone and instinct be the sum of his work. On good days, the rest of us remember his example.