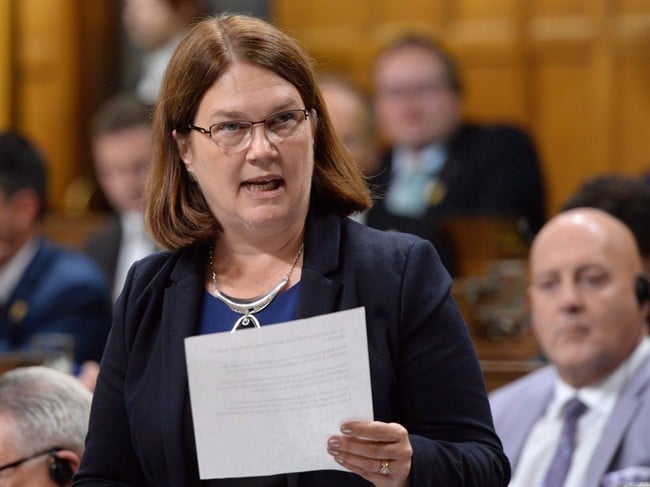 Minister of Health Jane Philpott responds to a question during question period in the House of Commons on Parliament Hill in Ottawa on Wednesday, Oct. 5, 2016. (Sean Kilpatrick/CP)

Barrette, among the most outspoken provincial ministers on the issue of federal transfer payments, said Monday he and his counterparts worry what the proposed reduction — three per cent, down from six — will mean for patients.

The financial squabble is expected to dominate discussions with Federal Health Minister Jane Philpott, who will sit down with the group on Tuesday.

“I am very comfortable in my position,” Barrette told a news conference.

“The reason I am very comfortable in my position is that it reflects everybody’s position. Some might not want to have the same way of communicating but at the end of the day, what I am expressing is basically what is the position of everybody.”

The conversation with Philpott on Tuesday will be very clear and direct, he added.

Ontario Health Minister Eric Hoskins, himself a Liberal and host of this week’s meeting, struck a more diplomatic tone, but made it clear the province is not happy.

“We have a very strong, collaborative relationship with the federal government, myself and Jane Philpott … but what is true is that provinces and territories now pay for approximately 80 per cent of health services delivered in this country,” he said.

“The portion of the federal contribution is declining with their current position to decrease the escalator down to three per cent.”

A three-per-cent increase would mean a $400-million shortfall for Ontario in 2017-18 and $1 billion across the country, Hoskins noted.

B.C. Health Minister Terry Lake has acknowledged there cannot be unbridled spending on health, but said he remains strongly opposed to what the federal Liberals have on offer, considering the persistently upward trajectory of health costs.

“This is a series of discussions,” Lake said. “I think we set the table here … we want to have a good relationship.”

Finance ministers from B.C., Ontario and Quebec also attended Monday’s discussions while others listened in over the phone.

In a joint statement Monday, provincial and territorial health and finance ministers suggested the federal government should consider postponing cutting the transfer increase until the premiers and Prime Minister Justin Trudeau can sit down and hash out an agreement.

The current annual rate of increase was established in 2004 under the last health accord.

For her part, Philpott has spent the last number of weeks playing down the transfer payment issue, insisting it is a matter for finance officials to hammer out.

Instead, she wants health ministers to review how to make the current health-care system more effective, while ensuring financial accountability.

Philpott has also made it clear the federal government plans to spend $3 billion on home care over four years, including palliative care.

The health accord is supposed to be an agreement to outline goals between the levels of government.

In a statement on Monday, the Canadian Medical Association said it believes a new accord is urgently needed so Canada’s publicly funded health-care system can meet needs and remain sustainable.