Psst! Hold out for more than just magic beans!

On Jack Layton's speech to caucus 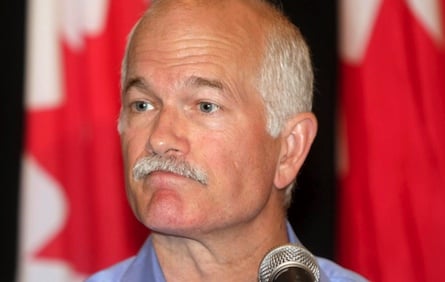 Okay, so we already kinda sorta know what he’s going to say, but how will he say it? Which words will he emphasize? Where will he pause for effect, and stare deeply into the camera to show us how very, very much he wants to Make Parliament Work for Canadians?

Oh, and what does he think of the government’s CTV-reported plan to extend EI benefits for 20 weeks for those who have worked at least seven of the last ten years? Okay, that probably won’t come up until the post-speech scrum.

Anyway, check back at 9:15 for full coverage of Jack’s pre-rally speech to caucus.

8:55:17 AM
Greetings, brothers and sisters! Workers of the world, unite and take over! Or, you know, offer to help the people who *have* taken over Make Parliament Work. Whatever you think best.

Okay, y’all, I was somewhat sceptical of the notion that any party (other than the Arthur Andre Cranky Independence Party, that is) could actually hold a rally in 308-WB, since ordinarily, you can barely hold a *committee meeting* there, but it turns out if you yank out the committee table, there’s plenty of room. Well played, NDP, well played.

Anyway, it is, indeed, packed in here — and it looks, as the normally serene Rosemary Thompson mournfully pointed out, remarkably like a campaign rally; there’s a wall-sized orange backdrop featuring Jack Layton’s name in an enormous typeface in front of a riser that is quickly being populated by bright-eyed and bushy-tailed staffers, MPs and, presumably, “supporters”.


Peter Stoffer – bless his Nova Scotian heart – is handing out apples to all and sundry, which is handy, since ITQ missed breakfast and may be in need of an organic sugar rush.

9:06:43 AM
More from the media huddle: “This doesn’t look like a caucus meeting *at all*!” It really doesn’t. And this is *after* the speech itself was already leaked the night before. Truly, you have our whole world in your hands, Jack. Be gentle.

9:11:37 AM
Jack be nimble, Jack be quick; Jack, finish up your not-a-campaign-style rally quick, since – as it turns out – we-the-media have an impromptu date with Diane Finley outside the Conservative caucus at 11:15. Apparently, she’s going to make a “short statement” on employment insurance. Shorter than Bob Fife on CTV?

Meanwhile, the members of the human backdrop at the front of the room are starting to get fidgety under the lights. At least they’re not being forced to wave “handmade” placards like certain Tory props of photo ops past.

9:16:53 AM
And heeeeeeere’s … Judy? Yes, Judy, who is apparently serving as warm-up act to the main event, who is, ITQ presumes, waiting outside in the hall for his cue to run into the room, fist pumping and full of that new spirit of cooperation.

Spirited applause for Judy’s little recap of the speech we’re about to hear, and then – Jack! Jack, looking less manic with glee than the buildup to his appearance at the back of the room would have suggested, wearing a white shirt – no jacket, but a muted orange tie. He takes the mic — after a bit of handshakey-shakey with the aisle-sitters — and then announces, in response to the determinedly jubilant applause, that he can see we’re all “ready to get to work”. Or something like that.

9:21:26 AM
Jack contemplates *why* so many Canadians — 2.5 million last fall, to be vaguely precise — voted for the NDP, and concludes that it’s because they “particularly wanted” that party to work for the unemployed, and those who may lose their jobs and are “literally terrified” at the prospect, as well as seniors, looming credit-card-debt facers and other worried ordinary Canadians – especially older workers. (Note to Diane Finley: Are you picking up on all this? It’s not too late to add a little something for Jack to that EI package you’re about to unveil!)

9:24:09 AM
And now he’s back on the speaking notes — minority parliaments good, Tommy Douglas, Medicare, rah-rah — and reminds us – or possibly himself – that, although they’d rather MPW, the NDP is ready for an election. “Yeah!” agrees a particularly keen supporter. In the meantime, though, they’re going to fight for pension and EI reform, infrastructure investment in communities, and against gouging by credit card companies.

9:27:38 AM
Ooh, an HST shoutout – or anti-shoutout – which “Stephen Harper” is plotting to foist upon the good people of British Columbia and Ontario, and the NDP is going to join with its provincial brothers and sisters to fight back.

‘It’s time for Stephen Harper to make a choice,” Layton tells us. “Will he show some kind of leadership,” and Make Parliament Work — or plunge us into the perilous waters of an unwanted election? Over to you, prime minister.

9:29:46 AM
Okay, so I guess he *isn’t* going to scrum right away — in fact, he’s going to disappear into a puff of cooperative smoke immediately after bounding out of the room, pursued by the full media contingent. Yeah, I know, I was confused too — doesn’t he want to stick around for caucus? He *is* the leader, after all — but apparenty, the *real* meeting doesn’t start until 10. Ever get the feeling you’ve been cheated?

Meanwhile, deprived of something other than feel-good speechifying, the reporters in the hall are getting a bit ornery. “He isn’t going to talk?” We ask, just to be sure. “He just did,” a smiling staffer points out. Well, yes, but …

Okay, off to Centre Block for the Finley drop-by. See you there! And isn’t it great to be back?