Q&A: Preston Manning on Canadian populism in the age of Trump

At his major convention of Canada's right, Preston Manning says today's populism should be harnessed, not denounced 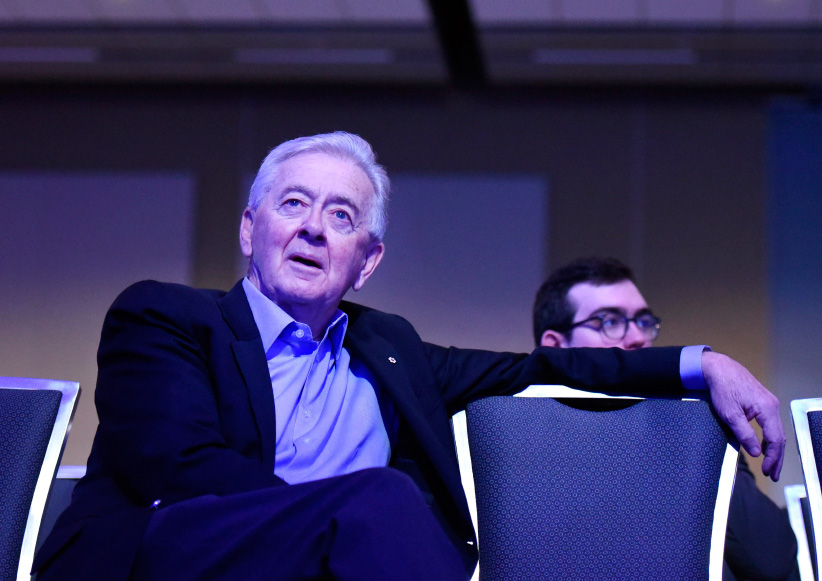 Preston Manning waits to speak at the opening of the Manning Centre conference, on Friday, Feb. 24, 2017 in Ottawa. (Justin Tang/CP)

The annual Manning Centre Conference, a gathering of all sorts of Canadians on the right of the political spectrum, opened in Ottawa today with remarks from Preston Manning, the former leader of the Reform party and founder of the Calgary-based centre. (Watch it live here.)

Shortly after he welcomed the crowd that will spend today and tomorrow debating policy and strategy, I spoke with him about what must feel like a strange moment in history for many Conservatives, especially those, like Manning, who identify themselves as populists—a label that’s taken on new meaning in the era of Donald Trump. This conversation has been edited for length and clarity. To hear the full interview, listen to this week’s Maclean’s On The Hill politics podcast, out on Friday night.

Q: I’ve interviewed you a few times over the years, and read your writing, and I always enjoy the way you don’t just talk about populist politics, but also about the social and historical roots of Prairie populism. I’ve heard you talk about roughnecks and cowboys and homesteading farmers.

So I couldn’t help wondering lately about how you might be responding when you read about some desperate character who crosses a windswept winter field from Minnesota into Manitoba, and loses some fingers along the way? Or five or six people who show up in Emerson, Man., at dawn, and the ladies at Little Jay’s Café open the doors early and say, ‘You better come in here and get some hot coffee.’ Isn’t there a part of you that thinks, ‘Welcome to the Canadian West. You’re the kind of desperate, striving people we’ve always absorbed here and celebrated’?

A: I think on all the debate on immigration, and all of that, the class of person that should be given the benefit of the doubt is the genuine refugee that is just in real desperate strait. Some of them are in the United States illegally because of [human] trafficking. They were caught up in trafficking, and you can argue to what extent it’s their fault, to what extent they didn’t know what they were getting into. So it’s just a tragedy to which, I think, one responds. That doesn’t solve the bigger problem of the larger immigration issue.

Q: There are people in the Conservative party and conservative movement who seem afraid of globalization in two main aspects. Firstly, free trade and competition with countries all over the world. Secondly, immigration and global migrations of people.

A: Well, I don’t pick up a fear of globalization, in particular, in the resource industries. I mean, in this country, what I find what people are afraid of or worried about is politicians who denigrate the importance of the resource sectors, which are the basis of our trading capacity. Like that speech by [Justin] Trudeau at Davos, when he said we are resourceful people, but was almost kind of apologetic that we have these resource industries. You know, chopping down trees and digging holes in the ground.

And where you find these worries about immigration, I think the way to handle that is to listen to the person that’s got concerns, and then try to move that in a positive direction, as opposed to decrying it and saying, ‘Don’t even raise that, you can’t raise that.’

Q: I’m trying to understand the Canadian context for populism and conservatism in general and put it in the context of what’s happening with Trump, what’s happening with Brexit, what’s about to happen in a string of European elections coming up where right-wing populism is a factor. Is it fair to say that you see Canadian conservative populism as having a history that should guard it against the dark and extreme elements in that?

Q: Let’s say we accept that. Is it not still necessary at certain junctures to denounce it when, for example, somebody says something that sounds racist, or bigoted towards Islam?

A: You can do that. But if it’s a politician that’s doing it, who [the public] are discounting anyway—because that’s part of this phenomenon, they don’t care what these politicians think—you’re far better to try to bring other pressure on them.

I used to do this. We had wild meetings [in the Reform party]. The way I used to handle it, particularly the racist statements or anti-Quebec ones, was to say, ‘Obviously, our friend here had some experience that has given him these views, and I appreciate him getting up and saying it, but surely what you’ve just said does not reflect my view…’ And I couldn’t get half that out, because the crowd is embarrassed by that too, and they start to clap.

I would say that pressure on that guy is far better than some political guy saying, you know, ‘Be quiet,’ or ‘You’re wrong’, or ‘Get the guys in the back to throw this guy out.’

Q: Let’s shift gears to economic anxiety, because that’s the other side of this question of populism. The Liberals in power right now would say they’ve cut the middle-income tax rate, they’ve offered parents more money, showing concern for pocketbook issues. How do you how do you differentiate a Conservative policy toolkit right now from those kinds of measures from the current government?

A: I guess two things. One is, if you go out and poll and ask, ‘Do you feel better today than you did before?’ they say, No. So you can argue [these policies are] helping them, but they don’t recognize it. In fact, and this is partly the economic side of populism, there’s resentment that these guys come out with policies that are supposed to make life better for us—on the macro[-economic] side, free trade or deficit control—and yet I feel more insecure than before.

So I think these policies that profess to be helping, but in fact don’t, or at least people don’t perceive that they do, end up fuelling this thing, not helping it. I don’t feel it, I don’t see it, and so I resent it. And I think the federal Liberals’ micro-tinkering is not causing any kind of upsurge in public confidence. The challenge for Conservatives is how to not get caught in the same web. I mean, the public just discounts what political people and parties say.

Q: I’d like to bring this conversation back to the international climate. Back when populism was a word we used a lot around Canadian federal politics—when your Reform party was rising up in the 1990s—it would never occurred to me that the word ‘populism’ would one day become attached to a multi-billionaire real estate mogul. How do you feel, as a guy who has had ‘populism’ closely associated with his name, about Donald Trump? Can you recognize a kind of populism in his rise?

A: I think the social media aspect of this has changed it. Do [his supporters] recognize him as a multi-billionaire? Or is it that the medium he’s using is one they’re very comfortable with, the younger people in particular? Is that the bigger factor here?

Q: How he communicates, rather than who he is.