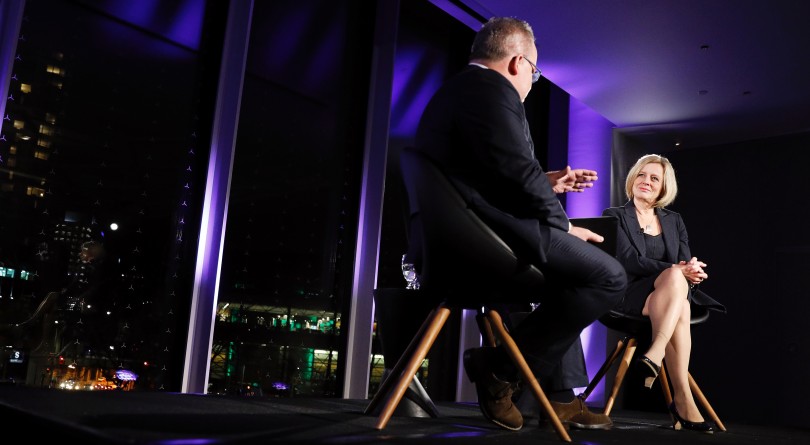 Rachel Notley sat down with Maclean’s senior writer Paul Wells Tuesday night for the latest in the Maclean’s Live interview series. She explained why supporting pipelines really is the progressive thing to do and had choice words for the condo-flipping, Facebook-updating coffeeshop-lounging crowd. Here’s a bit of what she said:

A small minority of folks have decided they want to handcuff our energy economy, but a lot of folks don’t really understand the degree to which the Canadian economy is inextricably linked to the energy economy, and so this idea that, Oh, we’re just going to keep the oil in the ground and we’re going to carry on in our happy little world, as I said earlier today, you know, flipping condos and writing Facebook movie reviews in our favourite coffee shop—that’s not a thing. The reality is the Canadian economy relies significantly on the investment that’s attracted to this country through our energy industry.

You can watch a full replay of the Notley interview here.

Their conversation took place on a day when the NDP Premier announced plans to buy trains to ship oil. Meanwhile, her conservative rival wants mandated cuts to oil production. It’s an unnerving time to be Albertan, writes Jason Markusoff:

It was one of those “what a time to be alive” days in politics out West.

Five years after the Lac-Megantic disaster, a New Democrat Alberta premier vowed to purchase massive trains designed to ship oil—and while bitumen isn’t that much of an explosion risk, it has around triple the carbon footprint of piping oil the normal way. And one of Stephen Harper’s most ideologically hardline cabinet ministers has opined that Alberta should order all companies to move in lockstep to cut back oil extraction.

Earlier in the day Notley said her government may follow through on a request from some oil companies to impose mandatory cuts to oil production to address the crude glut. If she does, she won’t have to worry about attacks from free-market proponents like United Conservative Party Leader Jason Kenney. He declared himself in favour of a government-imposed 10 per cent cut in production, equal to about 400,000 barrels a day. (CTV News)

Conservatives are pushing for disgraced former Liberal MP Raj Grewal to officially resign, something the Brampton rookie politician has yet to do. Grewal is reportedly under investigation by the RCMP related to his seven-digital gambling debt. Meanwhile attention has focussed on his use of his position on a finance committee to suggest FINTRAC—the agency which tracks banking and casino transactions over $10,000 in an effort to stop money laundering—should raise its reporting threshold higher. Grewal repeatedly caught FINTRAC’s attention at casinos. (CTV News)

If there seemed to be a truce between Prime Minister Justin Trudeau and Ontario Premier Doug Ford over the GM plant closure in Oshawa, the cease fire has ended. Ford picked up on federal Conservative Leader Andrew Scheer‘s talking point and blamed the closure on the Trudeau government’s upcoming carbon tax, which he called the “single biggest issue killing jobs” in Ontario. Never mind that GM is also shutting four plants in the U.S. (CBC News)

Ottawa could learn a thing or two from General Motors as the automaker closes several plants across North America, writes Peter Shawn Taylor. When times are good, that’s when you need to make difficult and unpopular decisions to prepare for an uncertain future. GM knows that. Ottawa clearly does not:

With the economy in the midst of a nearly decade-long expansion, there’s every reason to assume things will get worse rather than better on the fiscal front, especially factoring in Trump, trade and tariffs. Nonetheless, the Liberals appear unable to rein in their spending habit. Besides, who wants to get austere this close to a federal election? (Maclean’s)

Independent senators now make up the majority in a newly relevant upper chamber—and, yes, they have the power to kill bills, writes David Moscrop:

So far, the Senate remains committed to passing government legislation, ultimately deferring to the will of the elected, confidence chamber. But the staredowns reflect a changing—and perhaps soul-searching—Senate, as a new parliamentary dynamic emerges. Senators and MPs are working out, day-by-day, bill-by-bill, the limits of what the Red Chamber can, will and must do—and just as importantly, what they can’t, won’t and mustn’t. Harder argues what we’re seeing is something he calls robust bicameralism. “Parliament has always been bicameral,” he says. “But it hasn’t been bicameral in the sense of having the Senate as part of the day-to-day system of governance.” (Maclean’s)

Tomorrow at the G20 Summit in Argentina, the leaders of Canada, the U.S. and Mexico may or may not sign the USMCA trade deal which may or may not contain language that was inserted without the agreement of all three countries. (CBC News)