Ralph Goodale: No need to raise threat level in Canada 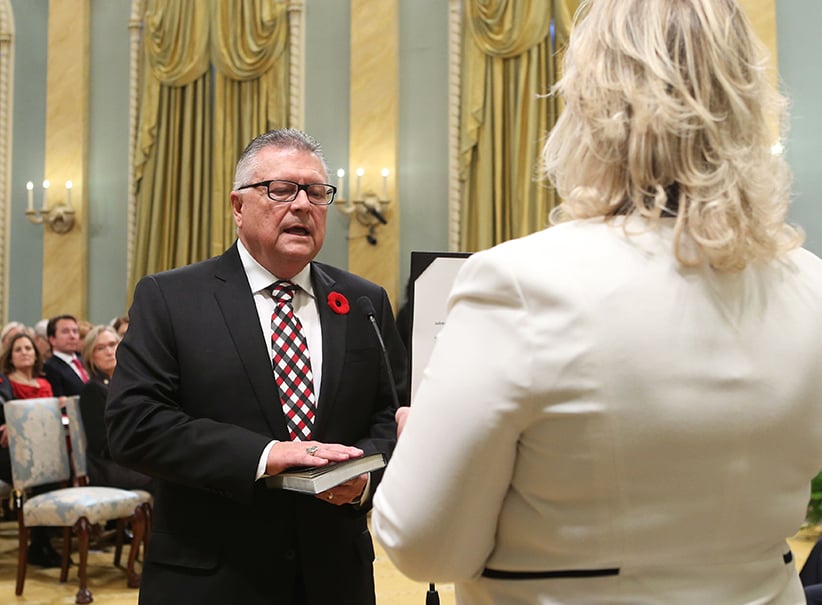 Canada’s new Public Safety and Emergency Preparedness Minister Ralph Goodale on Nov. 4 when he was sworn in. (Chris Wattie/Reuters)

The minister appeared at a news conference — flanked by key security officials — to assure Canadians that authorities are being especially vigilant and doing everything possible to keep the public safe.

Canadian Security Intelligence Service director Michel Coulombe and RCMP Commissioner Bob Paulson said they found no Canadian links to the assaults in France by militants from the Islamic State of Iraq and the Levant that killed some 129 people and wounded hundreds of others.

Officials also stressed that the thousands of refugees Canada has agreed to accept from strife-torn Syria would undergo thorough security checks.

Goodale urged people to be alert following the Paris attacks, but said Canada is basically safe and peaceful.

The minister said now is not the time for what he called “vigilante retribution” — a reference to a deliberately set fire at an Ontario mosque and an assault against a veiled woman in Toronto.

“Now more than ever is a time for all of us to support our fellow citizens. We need to demonstrate to each other and to the world our values of diversity and inclusion,” Goodale said.

“Canadians will stand together and face these times with skill, with resolve, courage and fortitude. Terrorists will not change our values or the quality of Canadian life.”

In the days ahead we will continue to take every possible step to keep Canadians safe, and do so “in a way that respects our national character,” he said.