Sgt. Peter Merrifield was told by a veteran officer that he was a target in an RCMP investigation that may also have spied on journalists and lawyers 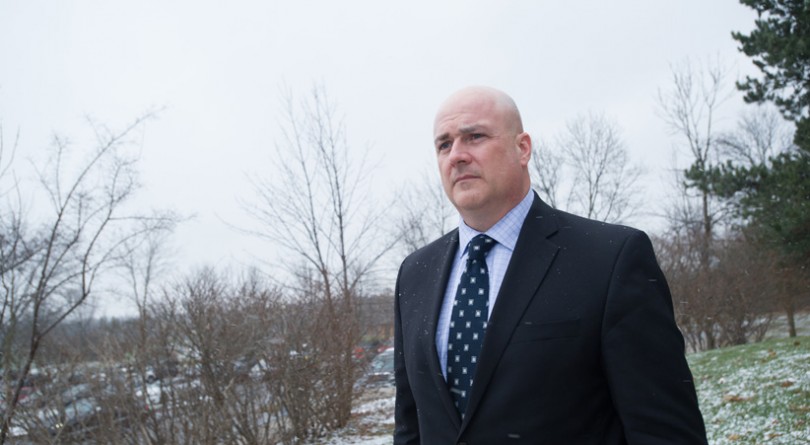 RCMP Sgt. Peter Merrifield arrives at the Newmarket, Ont., courthouse in 2015 where he challenged the RCMP on allegations of workplace harassment. (Photograph by Cole Garside)

The Trudeau government is refusing to respond to allegations that the RCMP used invasive techniques to eavesdrop on a Mountie while he was suing the force for bullying and harassment.

Sgt. Peter Merrifield was told by a veteran RCMP officer that national headquarters ordered the secret investigation after information about the private life of former prime minister Stephen Harper’s family was introduced into his lawsuit. Merrifield says his commanding officer confirmed there was an investigation, but not that he was the target.

A unit that specializes in wiretapping and electronic surveillance is alleged to have been ordered to investigate the witness who brought forward the evidence about the Harper family, and Merrifield fears that he, his lawyers and several journalists may also have been targeted.

In 2017, Justice Mary Vallee condemned the force’s “outrageous” treatment of Merrifield and ordered it to pay him $141,000 for “harassment and intentional infliction of mental suffering,” plus $825,000 in costs. The force has filed an appeal.

Merrifield’s career has been troubled since he got on the wrong side of senior officers by seeking the nomination to run for Parliament for the Conservatives in Barrie, Ont., in 2005. Although he got positive performance reviews, he was pushed from a high-profile unit, denied promotions and subjected to a whisper campaign. Senior Mounties had, in the words of Justice Vallee, “reckless disregard of causing the plaintiff emotional distress.”

Last week, in his mandate letter to new RCMP Commissioner Brenda Lucki, Public Safety Minister Ralph Goodale instructed her “to prioritize that the RCMP is free from bullying, harassment, and sexual violence.”

A recent report by former auditor general Sheila Fraser found that harassment in the RCMP is “pervasive and, according to many, a product of its culture and of its hierarchical structure.”

But Goodale has refused to order an investigation to determine if the force violated the law in its handling of its most outspoken whistleblower, instead inviting Merrifield to send any evidence to Department of Justice lawyers acting for the RCMP that he’s been fighting in court for a decade.

Both the RCMP and Goodale’s office declined to comment because the matter is still before the courts.

Merrifield believes a secret investigation was a continuation of harassment by senior officers that started in 2006, when superiors disciplined him for seeking the Conservative nomination to run for Parliament in Barrie. He is also national co-chair of the National Police Federation, which is poised to become the bargaining unit for the force.

Merrifield believes he angered senior Mounties by fighting them in court and helping lead the effort to unionize the force. In his harassment case, he revealed information about a senior officer who was found to have solicited a prostitute, and he subpoenaed then-commissioner Bob Paulson, forcing him to testify. Paulson, who had spoken disparagingly of Merrifield before a Senate committee, announced his retirement* a week after Merrifield won his verdict.

The investigation around Merrifield may have been ordered after a witness in Merrifield’s suit introduced an affidavit containing alleged details about the private life of Harper’s family, information that may have leaked from the RCMP unit in charge of protecting the family.

The evidence, which was discussed in a sealed courtroom, was introduced in order to cast doubt on the competence of RCMP management.

Justice Vallee ordered the affidavit sealed in 2014 after the Justice Department lawyers invoked Section 37 of the Canada Evidence Act, a provision that allows judges to order information be kept secret in national security cases. In 2015, Justice Vallee rejected an application to unseal the affidavit brought by a lawyer acting for media outlets, including Maclean’s, without giving reasons.

“Here you’ve got the DOJ lawyers reporting up their chain, about … [the] affidavit,” Merrifield said in a recent interview. “You’ve got the RCMP directing officer in the exact same [position]. Sooner or later it gets to the PMO. Sooner or later it gets to the commissioner. What we have now learned is it appears the contents of that affidavit were grounds to start an investigation.”

Merrifield learned of the alleged investigation in the summer of 2017, when a veteran Mountie told him that the RCMP’s secretive Source Development Unit—which is used to access email and wiretaps in organized crime and national security investigations—had been tasked to investigate him.

READ MORE: The problem at the root of the RCMP’s dysfunctional culture

The Mountie who spoke to Merrifield had been asked to pass the message along by another Mountie who was “disgusted” by the investigation.

“He told me that Peter Merrifield, his friends and associates were being investigated, and I should let him know,” said the intermediary in an interview, conducted on condition of anonymity.

Merrifield later confirmed that there was an investigation in a conversation with Assistant Commissioner Jen Strachan, who informed him that it had been run, at the request of national headquarters, by an anti-corruption unit based in Quebec, a unit typically used to investigate officers believed to have violated the law. Strachan, Merrifield’s commanding officer, did not confirm that Merrifield was the target of the investigation.

In the summer of 2017, Merrifield’s RCMP-issued BlackBerry starting giving him an odd error message: “Uncaught exception: Could not add listener—not permitted by your IT policy.”

He took it to RCMP technical support staff, who told him that it appeared that an application in the program was trying to communicate with the RCMP server.

A former RCMP officer with security expertise told Maclean’s that it appears the force put a secret application on the phone.

“This would either have to be by someone who has administrative rights to the device and had physical access to it, or this would have been done on the server end which is controlled by the RCMP,” said the former officer. “End users of the RCMP BlackBerry devices are not given any administrative access and therefore cannot install or alter any applications or processes on that device.”

John Phillips, one of Merrifield’s lawyers, says that another Mountie client who was under surveillance has had an identical message show up on his BlackBerry. Merrifield is afraid that the app may have been used to turn the device into a microphone, recording conversations even when he was not using the phone.

In July 2017, Phillips wrote to Goodale warning that they had learned of “potential misconduct.”

“If true, the conduct constitutes very serious criminal code violations, and wrongdoing in the nature of breach of trust,” Phillips wrote. “We are told that the misconduct emanates from the very highest ranks of the RCMP. The seniority of the ranks involved have caused us to direct this matter to you.”

Goodale replied in September, declining to look into the matter or discuss it because the force is appealing Merrifield’s verdict.

“The allegations you make are very serious,” Goodale wrote. “I have forwarded your emails to the Justice Canada litigators involved in the file so that these issues can be looked into further.”

Those lawyers, who have filed an appeal of the verdict against Merrifield’s verdict, have emailed Phillips, inviting him to present them with evidence if he has it.

“If an investigation is going on, as you say, involving obtaining court orders … presumably judicial officers have determined that such orders ought to be granted on the evidence presented before them,” wrote Sean Gaudet, the lead Justice Department lawyer representing the RCMP.

Merrifield and his lawyers don’t want to present evidence to the lawyers fighting them in court, and point out that Justice Vallee chided the RCMP for withholding evidence on “dubious” grounds, including evidence of an earlier secret investigation against Merrifield. It is not clear whether the RCMP or the Department of Justice withheld the evidence.

Frustrated by Goodale’s inaction, in March Merrifield wrote directly to Trudeau: “My belief is that I was targeted as a desperate act to try to obtain some evidence of wrongdoing by me to use it against me in the trial, or to hurt my career or to undermine our labour organizing activity.”

Trudeau has not replied.

Merrifield, who has suffered depression and health problems as a result of his decade-long battle with harassment and bullying, feels betrayed by the Liberals, who he had hoped were planning to clean up the RCMP.

Merrifield’s career has been repeatedly sidelined and, although he received positive performance evaluations, he has often not been able to do the work in national security that was his ambition.

Phillips is concerned that while an investigation into the witness may have been authorized by judicial order, the force may believe that it has the right to eavesdrop on members without a court order through their phones.

“I’m very concerned that that kind of monitoring may be happening.”

Merrifield and Phillips point to the case of New Brunswick Mountie Ken Smith, who was put under surveillance and harassed when he won a promotion that superior officers wanted for someone else.

“When you look at Smith, how far were they prepared to go?” Merrifield said. “They put a tracking beacon in his car. They illegally activated a listening device.”

Merrifield can’t believe that the Liberals won’t act to clear this up.

“My harassment lasted over 13 years,” he says. “And it’s now crossed the line where we believe criminal activity has occurred. The national police force of the country can only be held accountable by A, the minister of public safety, and/or B, the attorney general of the country, and/or C, the prime minister of the country. I got three people who can possibly help me out here, and they’re not doing it.”

Retired investigative journalist Paul Palango, who wrote three critical books about the RCMP, says it is hard for outsiders to understand the lengths to which senior officers will go to protect one another in the hierarchical command structure.

“You can’t criticize one thing,” he said. “As soon as you openly admit to one thing, because if you take that one thing out, the whole thing falls down. It’s like a house of cards.”

He said it is not surprising that Goodale wants to avoid looking into the Merrifield investigation.

“They essentially close ranks on anything. That’s the history.”

Merrifield, who is on medical leave, says his long battle with the force has worn him down.

“They’ve taken years off my life,” he says. “What looked like it would probably be a 30-year career, I think I’ll likely tuck my tail between my legs and go. I can’t take much more of a beating. I really can’t.”

CORRECTION, May 15, 2018: Former RCMP commissioner Bob Paulson announced his retirement a week after the Merrifield verdict. He did not resign, as stated in an earlier version of this story.