I get this sort of thing in my email almost every day:

FACTS: Today, the OECD reported that, under Harper, Canada will have one of the “weakest” economic recoveries of major industrial nations.

To date, Canada’s economy has been one of the hardest hit — shrinking more in the Second Quarter compared to the First Quarter than any of our G7 partners:

This is a classic example of how coarse and low-brow Canadian political debate has become. They don’t even try to hide the deceptions and half-truths any more.

Start with that sneaky change of tense: Harper claimed that Canada’s economy has been better than elsewhere; the OECD says Canada will have one of the weakest recoveries. There’s no contradiction there, despite the “aha!” tone.

But the boys in the Liberal boiler room weren’t satisfied to leave it at that. They go on: “To date, Canada’s economy has been one of the hardest hit.” Their evidence? It shrank more “in the Second Quarter compared to the First Quarter” than any other G7 country.

That specific statement is true, as the OECD numbers indicate. But notice how very specific it is: in exactly one quarter, Canada’s economy performed worst. How does that square with that phrase “to date”? A common sense reading of “to date” would mean over some extended period of time, as in “from the start of the recession until now.”

How does Canada fare on a more meaningful time frame? We don’t have to look far: the same OECD figures cited in the press release. Here, I’ve put them on a chart for easier reference. In most G7 countries, the recession began in Q2 ’08. So, indexing them all to 100 in Q4 ’07, here are their comparative growth tracks: 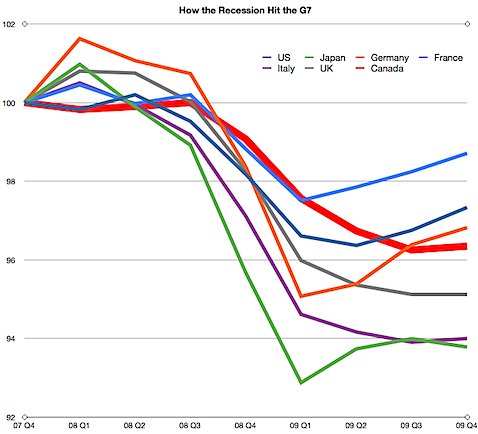 Two things are immediately clear from this chart. One, from the start of the recession through the most recent quarter (“to date”), Canada (the thick red band) did indeed suffer less than other countries. Through Q1 of this year, we were tied with France for the mildest recession, and even after our poor performance in Q2 we were still ahead of every other G7 country.

But two, looking ahead to Q3 and Q4, we seem headed for a more sluggish recovery than other countries. So happy days are hardly here again.

If the Liberals had wanted to be critical, but halfway truthful, they might have said: While Canada’s recession was less severe than other countries, our recovery also looks to be less vigorous. The government should not be complacent, but do x, y, and z…

That’s what you’d say if you wanted to be credible with your audience. In any bar-room argument, there are certain points you know enough not to make, because you know that if you do no one will listen to a word you say after that: you’ll have destroyed your credibility. But that’s not the level at which political debates are carried out in this country. It simply doesn’t matter to the people who pump out this stuff whether their argument holds any water whatever. They don’t care what it does to their credibility. They just throw everything at the wall to see if some of it will stick.

I don’t mean to single out the Liberals. The Tories do exactly the same thing. It’s just unbelievably moronic, and it drags everyone and everything down.