The Liberal update is rife with uncertainty and debt, while the 'fiscal anchor' has been replaced by 'guardrails'. Fingers are crossed for happier times. 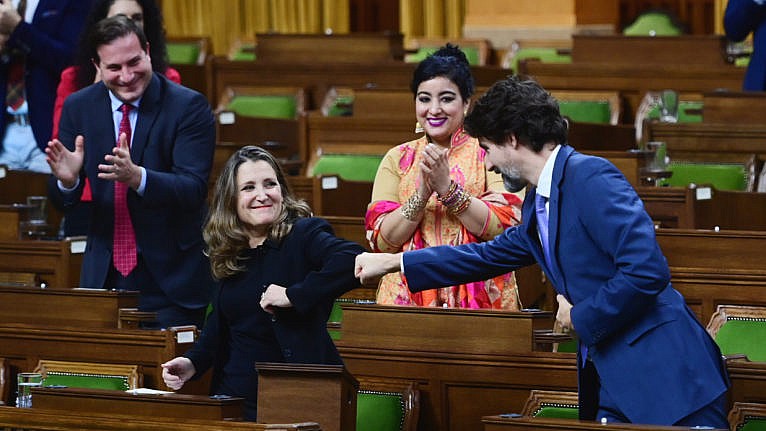 Minister of Finance Chrystia Freeland gets a fist bump from Prime Minister Justin Trudeau after delivering the 2020 fiscal update in the House of Commons on Parliament Hill in Ottawa on Monday, Nov. 30, 2020. (Sean Kilpatrick/CP)

Federal budgeting is never simple, and a fashionable way to simplify the story of the nation’s finances is to cast finance ministers as household belt-tighteners or corporate balance sheet wranglers. But during a killer pandemic, Chrystia Freeland—and Bill Morneau before her—have both dropped fiscal plans that enlist Ottawa as a one-stop shop for debt accumulation.

Canada’s national debt could hit $1.4 trillion by 2024, but the Department of Finance is projecting the country will avoid fiscal ruin thanks to a combination of low interest rates and predictable debt-servicing costs aided by a deliberate shift to long-term debt. The projections say Canada’s debt-to-GDP ratio, which topped out at 39.4 per cent in 2019-20, could sit at 51.4 per cent by the end of this fiscal year, and 55.5 per cent in 2026.

But Freeland’s 237-page roadmap is riddled with as much uncertainty as her predecessor’s summer snapshot. And while the government’s tone is less grim about Canada’s short-term future, the Liberal plan refuses to define the terms of the country’s economic recovery. No fiscal anchor—a metric that guides Liberal policy making and holds the government to account—will guide Freeland’s next moves, and the feds aren’t even sure how much stimulus they’ll inject into the economy.

For the last few years, the fiscal anchor took the form of a steadily declining debt-to-GDP ratio. Freeland says a new fiscal anchor will eventually emerge, but only “when the economy is more stable.” For now, says the fiscal update, “no one data point is a perfect representation of the health of the economy.”

So the feds are adopting a new euphemism, “fiscal guardrails,” which describe “data-driven triggers” that “will let us know when the job of building back from the COVID-19 recession is accomplished.” The guardrails include the employment rate, unemployment rate and total hours worked.

Deficit projections also vary widely. The government’s baseline estimate predicts a deficit of $381.6 billion, which is $38.4 billion higher than Morneau’s July snapshot. The number-crunchers also gamed out two bleaker timelines in which “extended restrictions” could nudge the deficit up to $388.8 billion and “escalated restrictions” could see it top out at $398.7 billion—and that’s before any stimulus funding.

The pace of the economic recovery, guided by the government’s new guardrails, will also dictate the rhythm of stimulus funding and the toll it takes on the federal balance sheet. Over three years, that stimulus could total as little as $70 billion and as much as $100 billion.

For months, the Liberals have hammered home the good news on all this new debt: it’s cheap. In July, Morneau’s snapshot said the feds would pay $4.3 billion less in debt charges thanks to historically low interest rates. Those debt charges have ticked up slightly, but interest rates have ticked down further still, and they’re not projected to increase dramatically for the next several years—nowhere near pre-pandemic forecasts.

Ottawa, like most countries, took on a “significant portion” of short-term debt in the early days of the pandemic, but the government will now move to “shifting its issuances more toward long-term bonds in order to take advantage of low interest rates” for the long term. The feds will also consider reintroducing an “ultra-long, 50-year bond” next year.

During a virtual press conference, Freeland explained how her government’s plan, rife with uncertainty and ballooning debt, could possibly calm the nerves of influential ratings agencies and investors. The finance minister was succinct: “We really believe that transparency, prudence and above all, a plan for growth, is what’s important to Canadians and important to capital markets.”

That answer will not abide in the minds of Freeland’s opposition. The Liberals will be the party that set new deficit records and plunged the nation into debt worth $1 trillion, and counting, with no plan to reduce it. Any stimulus package is guaranteed to raise the ire of opposition politicians waiting to pounce on any hint of pork barrelling, red tape or ideological favouritism. And they’ll howl about how the Liberals never tabled a full budget in 2020.

In his response to the fiscal update, Tory leader Erin O’Toole alluded to his non-governmental skillset as the cure to what ails Canada. “My experience in the military and in business demands of us to learn from our failures. We must provide stability and certainty to those who rely on us. While the Prime Minister prefers to compare himself to the worst student in the class,” he said, presumably referring to the United States, “I want to strive for Canada to be the best.”

But interest rates are historically low, vaccines may be on the way to Canada before too long and every economic forecast shows growth for the next several years. Uncertainty is the word of the day, but stability may be just around the corner. At the least, the Liberals had better hope so.