The PM’s promise to slash red tape is exactly what the Canadian Federation of Independent Business wants. That's good politics and iffy policy.

On Wednesday, the Prime Minister attended a forum hosted by the Canadian Federation of Independent Business (CFIB) and its president, Dan Kelly. There, Stephen Harper promised he’d cut red tape for Canadian small businesses. He promised to make it easier for small businesses to write off home office expenses. Those parts were predictable. Then, he baffled some observers by speaking in wonkish gobbledygook. Harper said:

“What we are going to do is expand the baseline on [red tape reduction], so it will not just be 20 per cent off of regulations but 20 per cent as deriving from legislation and policies as well. So we want a much broader baseline for reducing the red tape.”

Just what does this mean, exactly?

Sometimes, a campaigning politician makes a policy promise to please a lobby group rather than to please voters directly. Of course, the hope is that the organization will indirectly tell voters to be pleased instead. To pull this off, politicians often have to speak in the lobby group’s language, rather than the loftier tones you’d normally hear on the campaign trail. And what the Prime Minister said in the CFIB’s dialect was very simple.

Translated, he said: “Dan, I love you guys. And I’m willing to do whatever you want me to do to show it.”

Depending on which story you believe, the phrase “red tape” either started with American Civil War pension forms wrapped in red tape, or with 19th-century tally sticks bound in red tape at Westminster. Either way, red tape is now shorthand for an entire genre of public frustration with government, covering everything from government agencies that still use fax machines, to a bid process that no real world bidder could qualify for, to the notorious inflexibility of heritage building codes.

Politically, most progressives and too many conservatives see red tape as purely a business issue. That’s a sign that the CFIB has been too successful in its campaigns. Smarter thinkers on both sides grasp that modernizing government rules can also be a win for everyday citizens, charities, non-profits and even frustrated public servants.

The love story part starts with the fact that “red tape” can mean almost anything to any of those groups. Like pornography, you know what red tape is when you see it. So in the 1990s, think tanks and governments struggled to define it more clearly. Deep in the era of Reinventing Government, policy hacks in Holland, the U.K. and especially in Al Gore’s corner of the Clinton White House decided red tape was best defined as a paperwork burden for business. Canadian Liberals – like the late Treasury Minister Reg Alcock – signed on to this approach. Surveys were conducted. Businesses were asked how many hours of government paperwork they did every week. Then, economists learned the dark art of trying to peg a monetary value to whatever hourly value spat out at the end of those surveys. Example: the latest CFIB study pegged the economic cost of Canadian red tape paperwork at $37.1 billion in 2014.

Oddly enough, the global leader in actually implementing this doctrine is our very own province of British Columbia. In 2001, under Liberal Premier Gordon Campbell, the B.C. government counted its regulatory requirements, and landed on a total of 360,395. As of 2014, they had cut that total to 228, 941. As of 2015, the count is still down at 204,826, a net reduction of 43 per cent.

Using this formula to count laws and regulations is obviously imperfect. Many have stuck by it with the reasonable excuse that at least it actually measures something consistently. Ottawa has tried to address its flaws measuring both the paperwork burden and the regulatory count side by side. Either way, measurement matters, especially to lobby groups. Now, the CFIB can grade government progress based on specific metrics – and B.C. always gets an ‘A’ if the count stays down. 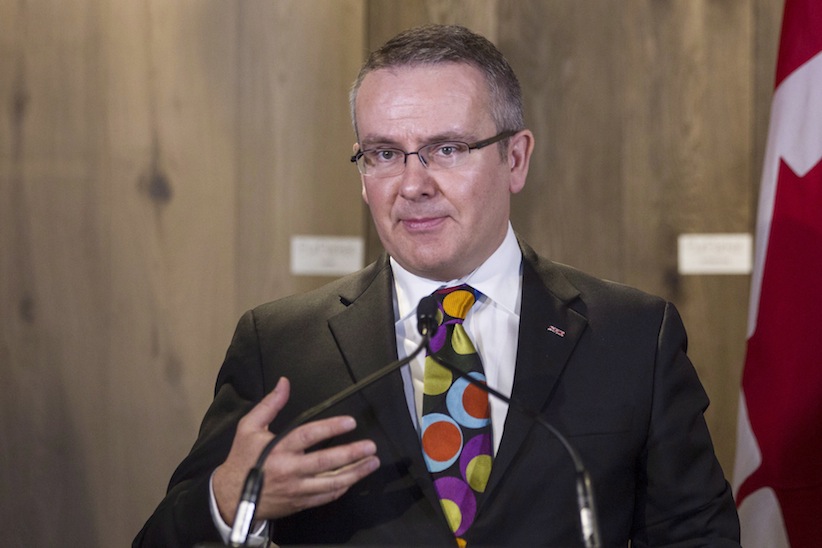 This is where Stephen met Dan. Or, more accurately, this is where the government of Prime Minister Stephen Harper fell in love with the political appeal of doing exactly what the CFIB wants on red tape. In return, the CFIB would oblige with praise and its annual photo op on Red Tape Week – just as they would with a government of any stripe that did the same.

That’s why the Conservative government committed to a 20 per cent red tape cut on the B.C. model as policy a few years ago. Then, in April of this year, it enacted Bill C-21, which made the 20 per cent target law. Bill C-21 also committed to a 1:1 rule – meaning, every new regulatory burden proposed must be matched with a cut of equivalent burden somewhere else.

Somewhere along the way, somebody in Ottawa left statutes and policy guidelines out of the C-21 baseline when counting regulatory requirements, which is why the federal total was so small at roughly 129,860 as of November, 2014. The CFIB replied by calling C-21 “a good start.” Since the CFIB is notoriously polite by lobby group standards, this might as well have been a searing condemnation. So on Wednesday, the Prime Minister took time out of his busy schedule to tell Dan Kelly that he would do it exactly the way the CFIB wanted it done next time. And that’s what passes for love in the world of conservative policy wonks.

Small business voters will cheer. And from one perspective, they should. Many dieticians argue that almost any kind of diet is a better diet, because the simple act of thinking about food means you start reading packaging labels and measuring portions, and some benefits usually follow. In much the same way, any government in Ottawa that pays more attention to the practical impact of its laws is likely to become a better, more modern regulator in the process.

Yet the Prime Minister’s approach is now 100 per cent beholden to the CFIB’s approach. It’s good politics, but there are significant policy weaknesses in the CFIB’s thinking. It’s a textbook case of why it’s important not to totally outsource policymaking to a lobby group, no matter how well-intentioned their lobbyists might be.

Related: From 2014: On the EI hiring credit, Joe Oliver takes the CFIB’s word for it

The first challenge: as British Columbia officials have privately admitted, fixating on 1:1 ratios and regulatory counts can be a distraction. The formulaic approach incentivizes public servants to target easy wins, when they could be targeting big regulatory messes that actually impact more people (like home office write-offs). It’s like trying to cut a path through a thick forest by trimming branches overhead. That’s why B.C. has—rightly—shifted focus to reforming how regulations work rather than just how many there are. For example, B.C. officials recently brought cities together to create “inter-municipal business licenses” that work across entire regions. Allowing a contractor in Surrey to operate across Vancouver with one license doesn’t cut the regulatory count, but it’s still a huge win for the contractor.

Still, there’s a bigger weakness, and it’s more fundamental. Simply put, the last decade of business history should have made it clear that we can’t count laws in the same way we’d count the tax burden or overall government spending. While there will always be room to modernize obsolete laws and pare down excessive requirements, there’s also conservative, free-market demand for the opposite of what the CFIB wants: a legal system that actually grows with the economy.

Call it the “Golden Rules” effect. Thanks to economist Joseph Schumpeter and his notion of creative destruction, we know that most economic growth in the West comes from new business models and new technologies. Most business lobbyists habitually make an abstract call for less regulation. However, when a new technology or a new business model comes along, creative destruction means the opposite; we inevitably add new laws to the books to smooth the way for new products – but they rarely destroy the old businesses instantly, and so old rules remain in place.

Cars supplanted horses, but we still have rules for horses on roads, because there are still carriage rides and police patrols to deal with. The invention of TV meant new rules for TV broadcasting, but that didn’t make radio regulations obsolete. Before condo laws, “property rights” meant the right to a parcel of land and a building overtop of it. Now, we partly owe Canada’s condo economy to an added layer of laws that makes it safe, normal and predictable to splice and sell property on a three-dimensional basis.

That’s why the biggest pressure in regulatory policy right now is for additional regulation. The emerging drone industry wants new laws to safely set aside airspace for drone services. This will add to the net regulatory count, just as the air industry needed new rules to govern how aircraft could fly over people’s property in the 1920s. Ditto driverless cars, which will inevitably spawn new rules to manage the consequences of collisions with human drivers. Ditto: biosimilar drug laws to handle manage patent conflicts for biological drugs. Ditto: Uber and Lyft. Regulators in cities and states that have made room for ride-sharing almost always did so by grafting new rules overtop of taxi regulations rather repealing the old rules altogether.

In fact, in defiance of CFIB—and now CPC—orthodoxy on regulations, more law often facilitates more economic growth, provided new laws make the economy more open to innovation in the process. Tech-friendly B.C. was an early-mover in legalizing electronic signatures for e-commerce (more law!). Vermont built a lucrative niche in the insurance industry by making it legal for U.S. companies to self-insure there (more law!). Go back to 1931, and Nevada added seven pages to its legal code – and hundreds more since (more law!) – to legalize gambling, creating a tourism industry in the desert in the process.

That’s why the CFIB’s fixation on reducing the quantity of regulation – and the rush to embrace it in orthodox conservative circles – could actually constrain Canada’s competitiveness for the economy of 2020, even if it shaves down some paperwork for the economy of 2015.

None of that matters right now, of course. It’s election season, after all. What matters to the Conservative Party is whether it’s showing enough love for the CFIB’s agenda to woo small business voters. But if the Tories are actually re-elected in October, let’s hope that the Prime Minister is willing to flirt with different partners on the red tape problem—for his sake, the economy’s sake, and ours.

Brian Kelcey is a consultant in urban policy and politics, with experience as a senior political advisor at Queen’s Park. While serving as an advisor to the Mayor of Winnipeg, he managed Winnipeg’s Red Tape Commission in 2004-2005. He can be reached at www.stateofthecity.ca or on Twitter at @stateofthecity.