Reframing the debate over expat voting 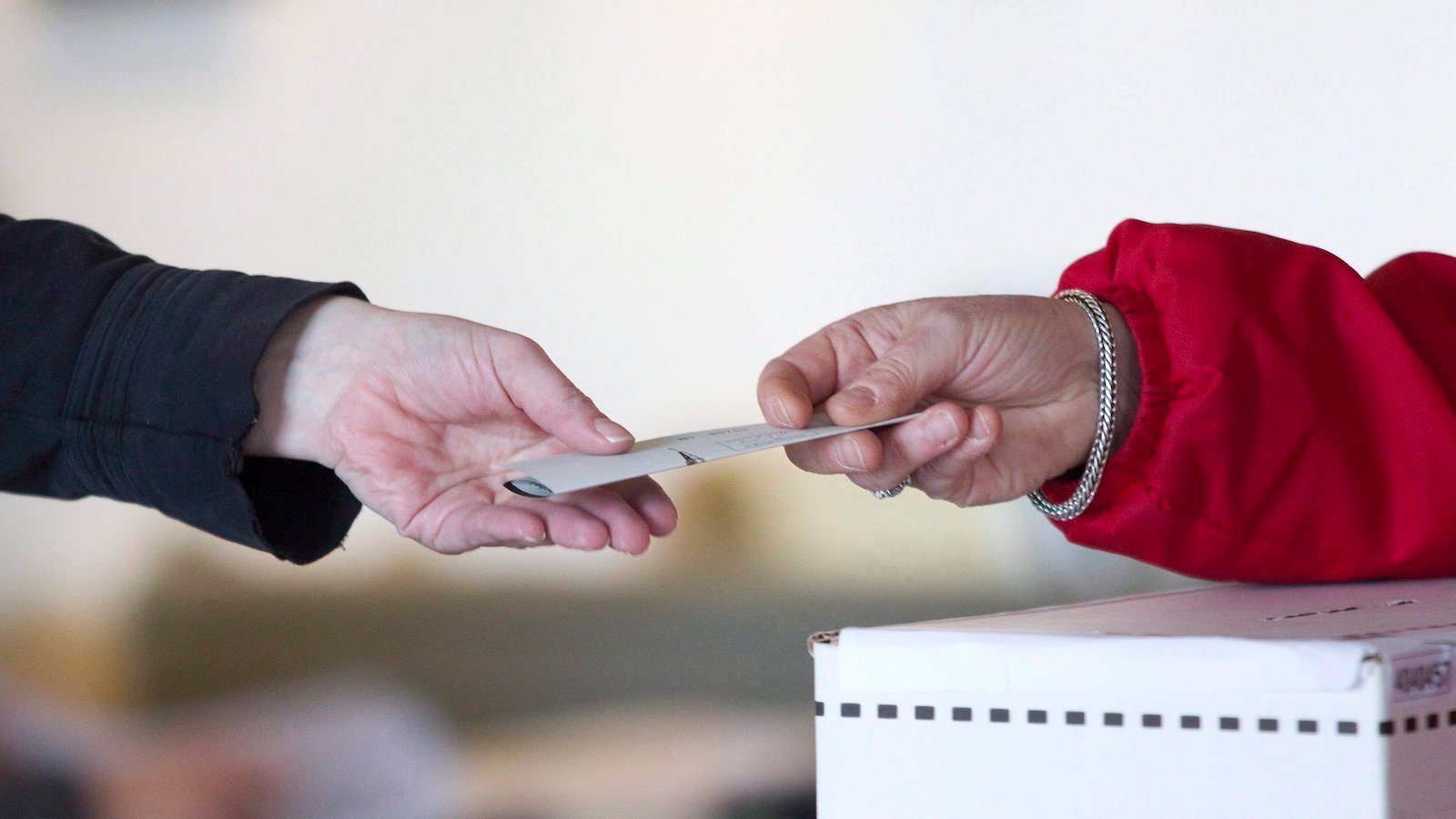 In a 2-1 ruling, the Ontario Court of Appeal overturned a decision that would allow 1.4 million Canadians who have been studying, working and living abroad the right to vote.

The two justices that voted to upheld federal voting restrictions base their entire ruling on a new argument put forward by the federal government about the social contract. They argue that the social contract is a citizen’s right to elect a Member of Parliament to represent them and their obligation to obey the laws that are enacted.

Permitting non-resident Canadians the right to vote, “would allow them to participate in making laws that affect Canadian residents on a daily basis, but have little to no practical consequence for their own daily lives. This would erode the social contract and undermine the legitimacy of the laws,” argued Chief Justice George Strathy for the majority, joined by Justice David Brown.

Both justices rely heavily on a new argument of a highly theoretical nature as valid grounds for taking away the fundamental right of citizens to vote. It is interesting to note that both justices were appointed to the Court of Appeal in 2013 and 2014 respectively by Prime Minister Stephen Harper’s government.

“I do not agree that the number of laws a Canadian citizen is subjected to can be tied to the preservation of the social contract,” argued dissenting judge, John Laskin, who was appointed by prime minister Jean Chretien’s government in 1994. “Non-residents have the same obligation to obey the laws that affect them as do residents. Non-residents pay Canadian income tax on their Canadian income, and property tax on any real property they may own in Canada.”

The so-called “social contract argument” is not mentioned in the application where the judge ruled that the voting ban is unconstitutional, nor in the stay motion which was heard last year. In fact, this argument has nothing to do with why Parliament extended and restricted voting rights for Canadians abroad.

We analyzed parliamentary debates, committee reports and members’ statements and found that in discussions on enfranchising Canadians residing abroad, parliamentarians expressed discomfort not knowing the exact number of Canadians abroad, how connected they are to Canada, or whether the elections will be decided by people who have been away for 25 years or more.

The paranoia over the idea that expatriates have differing loyalties or that the expatriate votes will somehow completely change the tide of an election in any given year is not backed by evidence.

Expatriates who are allowed to vote do so abroad, and their votes are counted in the last riding in which they lived or the current home address of their partner, a relative, or a person with whom they would live with if they were in Canada.

Voter turnout among Canadians abroad has also decreased over time. While these data may establish that a very small percentage of Canadians abroad vote, this does not mean they should be denied the right to vote. There are other problems that likely contribute to the low turnout such as the fact that Canadian parties do not outreach to expats and that voting abroad is a difficult process.

In 2008, their votes could have impacted only two ridings. These are Kitchener-Waterloo and Vancouver South. And in 2011, their vote could have only impacted one riding; Nipissing- Timiskaming. These ridings had tight races between the Conservatives and Liberals with conservative candidates winning in two of them. 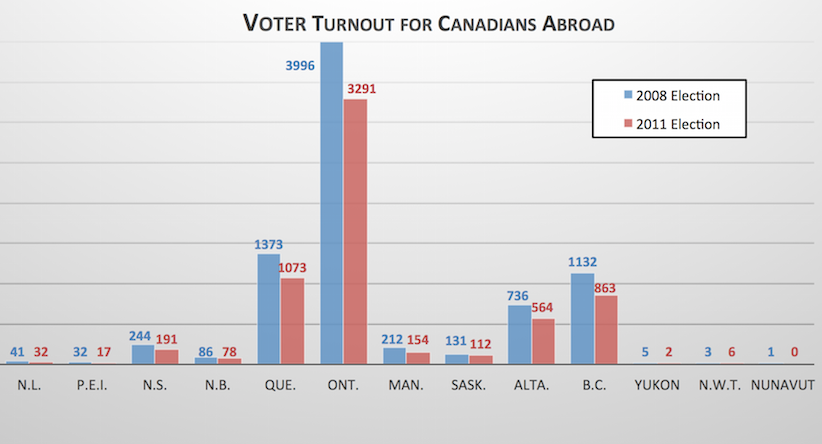 Expatriate votes are spread over many ridings, increasing in urban ridings such as Ottawa Centre, Ottawa Vanier, Trinity Spadina and Vancouver Centre. In prior elections, their ability to influence the outcome of Canadian elections has been minimal, but with over 2.9 million Canadians abroad they are a significant constituency that should not be dismissed and ignored. With polls suggesting a tight three-way race in the general election on October 19, expatriates might have made a difference in closely contested ridings.

It is impossible to know how Canadians abroad vote because Elections Canada lumps their votes with prisoners and military members who use special ballots. We analyzed the special ballot data of 308 ridings from the 2008 and 2011 federal elections and found that in 2008 and 2011, Conservative candidates received more of it than any other party. The Liberals took the second largest share of the special ballot vote in both elections and actually came up a bit in 2011. While the votes of expats, prisoners and military members lumped together show strong support for conservative candidates, it is possible that the expats among them vote differently.

The five-year limitation, as opposed to some other limit, is overly drastic and Canada’s provision is not comparable with similar democracies around the world. Justice Strathy called the five-year limit “reasonable and minimally impairing,” but as we shall see, Canada is actually an outlier in this regard.

Americans living outside of the country have the right to vote no matter how long they have been abroad providing they pay taxes. The right to vote expires in the United Kingdom after 15 years abroad. To put this into perspective, this is three times longer than what Canada permits even though Canada is part of the Commonwealth.

Australian citizens abroad are allowed to vote so long as they intend to return to Australia within six years. After six years, citizens can renew their status by making an annual declaration of their intention to return “at some point” thereby voting for an indefinite period. In New Zealand, there is a three-year limit but the clock restarts every time citizens visit the country. Moreover, New Zealand extends the right to vote to non-citizen residents from other Commonwealth countries.

The United Kingdom extends similar voting rights to citizens of Commonwealth countries and citizens of the Republic of Ireland. The five-year limit in Canada is an arbitrary number and is unnecessarily onerous. On the surface, it is a year less generous than Australia, but Australians can renew their status by expressing a mere intent to return to the country “at some point” in the future. Canadians, on the other hand, need to resume residency to regain their right to vote abroad.

The right to vote is a fundamental right of citizenship that is protected by the Charter and does not depend on place of residence. The five-year limitation does not conform to the 21st-century demands of globalization. While there is currently an NDP-sponsored bill to repeal the provision that limits voting rights for Canadians abroad as unconstitutional, it is possible that the unconvincing judgment of two Ontario appellate judges could be overturned on appeal to the Supreme Court of Canada—but, alas, not in time to restore democratic rights to the close to a million and a half Canadians living abroad for the fall election.

Peter H. Russell is Professor Emeritus of Political Science and a constitutional expert at the University of Toronto.

Semra Sevi is a masters graduate of Political Science at the University of Toronto.