Maclean’s is your destination for the 2015 election. Start with our in-depth primers on the big issues, including Syrian refugees

Critics slamming what they say has been limited—and slow—assistance from the Canadian government to Syrians and Iraqis displaced by civil war and unfathomable Islamic State violence have forced the Conservatives onto the defensive often since the migrant crisis exploded in 2012. That criticism intensified Wednesday after photos of a toddler lying facedown on a Turkish beach caught the world’s attention. Three-year-old Alan Kurdi, along with his brother Galib and mother Reham, drowned during the family’s attempt to flee to Europe. Father Abdullah survived. Early reports initially said Canada had denied refugee status to the family, but the government says it never got an application for Alan, Galib, Reham and Abdullah Kurdi, whose sister lives in British Columbia.

DELAYED HELP FOR A FRACTION OF SYRIANS

The four-year-old conflict in Syria has produced 3.9 million refugees and 7.6 million internally displaced people, according to the UN High Commissioner for Refugees. About 2,300 Syrian refugees have arrived in Canada so far, less than a tenth of one per cent of total Syrian refugees. As well, of 370,000 Iraqi refugees the UN agency says have fled the country, 22,000 came to Canada; another 3.6 million are internally displaced. Making good on Canada’s Syria pledge was beset by delays.

Last January, the government vowed to resettle another 10,000 Syrian refugees. Initially, it was hard to get details on how that was going, but the government now says it has welcomed an additional 1,074 Syrians. Neighbouring Turkey,  Lebanon and Jordan are absorbing millions of Syrians fleeing the conflict.

On Sept. 14, the government announced it would provide funding to match up to $100 million in donations made by Canadians before the end of the year. But the funds won’t be distributed quickly, and donating to a specific group doesn’t mean that group will get the same amount from the government: organizations will have to apply to the government to access the funding.

On Sept. 19, the government promised to speed up refugee processing and estimated it will be able to resettle the 10,000 Syrian refugees by September, 2016, 15 months sooner than expected.

—Resettle an additional 10,000 Syrian and Iraqi refugees over the next four years, on top of the 10,000 they promised last January to resettle.

Harper has dismissed a call by Liberal Leader Justin Trudeau for the federal party leaders to meet, calling it a partisan game.

NDP: The New Democrats, under Leader Tom Mulcair, want to shift the focus to diplomacy and aid, and work with Turkey, where about two million Syrians have found sanctuary, to speed up the process for getting refugees resettled in Canada.

—Resettle an additional 10,000 government-sponsored refugees by the end of 2015, in part by boosting the number of Canadian immigration staff in the region, and fast-track private sponsorship with no cap.

—Last weekend, the party promised to increase the number of government-sponsored Syrian refugees by 9,000 per year for the next four years.

—Resettle 25,000 refugees from Syria through government sponsorship and work with private sponsors to accept more.

—Put $100 million into refugee processing and provide another $100 million to UNHCR for relief work in Syria and surrounding countries.

Green: Green Party Leader Elizabeth May wants Canadian military transports to bring Syrians fleeing their country to Canada by air or water, and called for special measures like temporary resident permits to speed up the process. May also supports Trudeau’s call for an all-party leaders’ meeting.

—Ramp up resettlement efforts to welcome 40,000 Syrian refugees over the next 5 years. 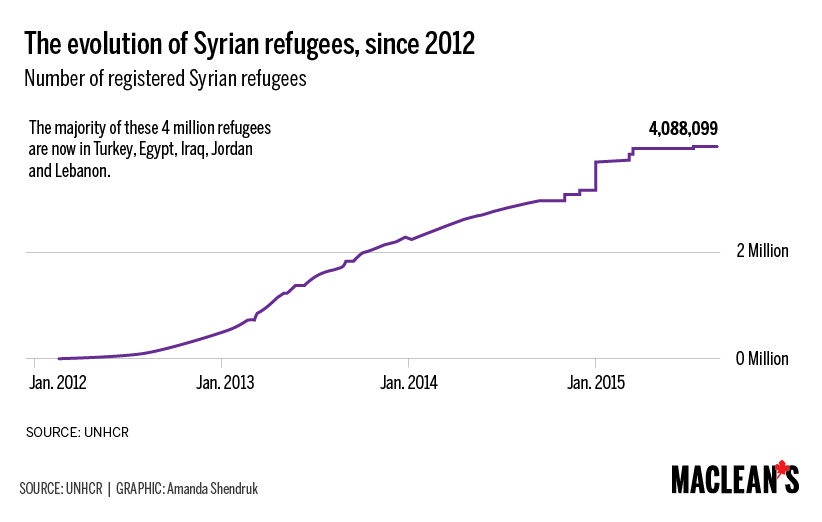 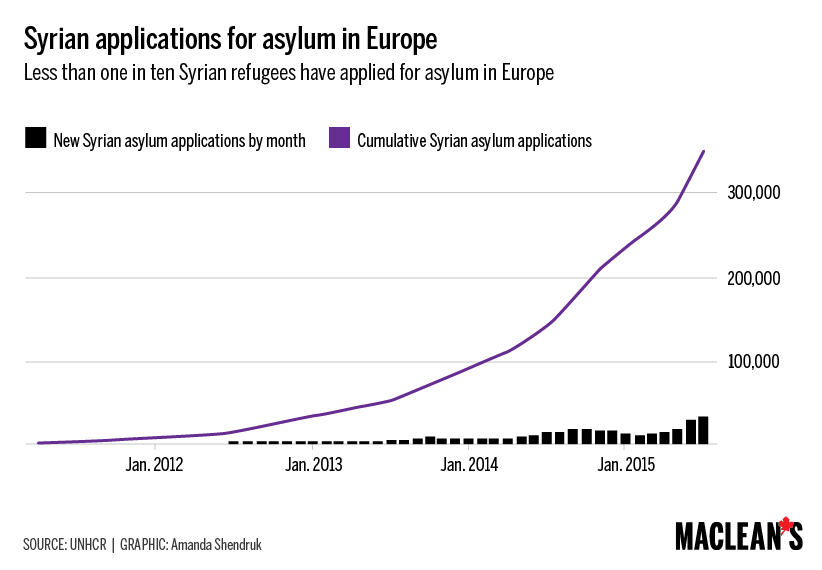 “The whole world is being asked, What’s our responsibility? And for Canada this is part of a broader debate about who belongs. In so many ways we’re talking about what is the character of Canada as a society. I’d like to think it’s a multicultural one that’s seen success stories of the Vietnamese boat people, the Ismailis, of others, [and] that, when there is a mass slaughter of so many innocent people, we do step up and they become really successful members of our society. So it’s not a handout. I think it’s important for it to be part of a conversation about how we build.”
—Bessma Momani, associate professor at the Balsillie School of International Affairs and the University of Waterloo