Remember when that Wright-Duffy cheque took over question period? A look back at 2013's premiere parliamentary soap opera 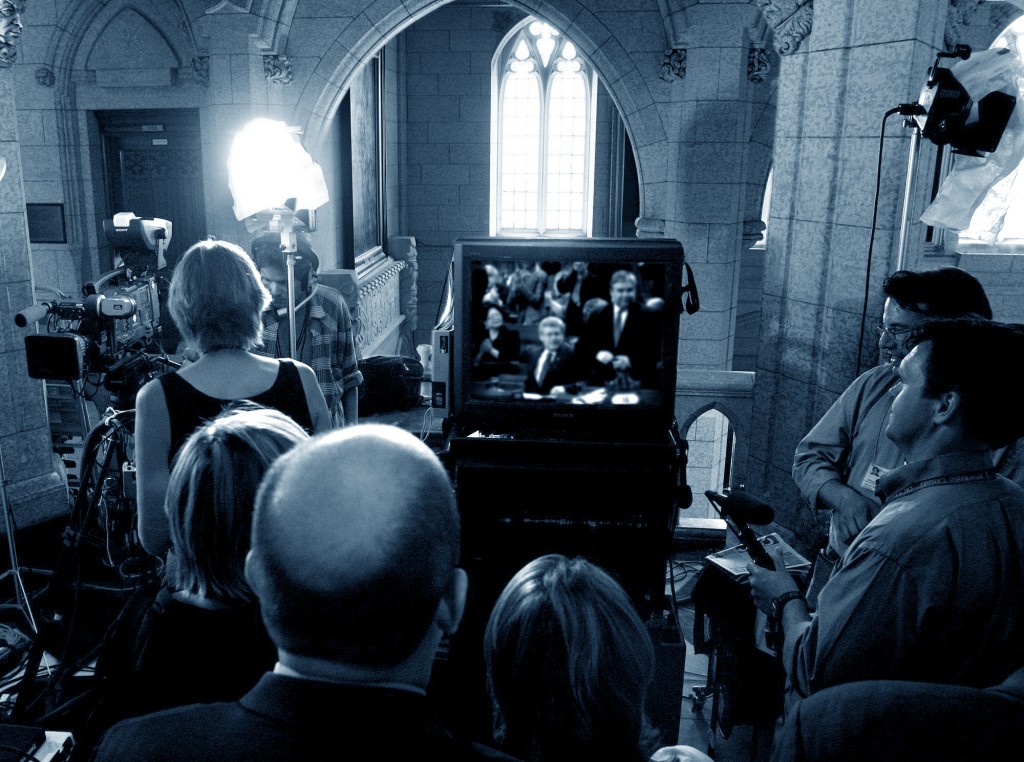 NDP Leader Thomas Mulcair eschewed even a cursory preamble as question period commenced on May 28, 2013. Mulcair, the bearded New Democrat and opposition leader, faced Prime Minister Stephen Harper and posed a simple question: “On what date and at what time was the Prime Minister informed that Nigel Wright has made a payment to Conservative Senator Mike Duffy?”

Question period is known for its predictable ingredients: incessant repetition of “Mr. Speaker,” a verbal tic that ostensibly recognizes the chair of the House of Commons—but really only stitches together a few stanzas worth of talking-point rhetoric; preambles that add required vitriol to inquisitive opposition parliamentarians; leading and loaded questions—”How can he not . . .” and “Does he not think . . .”—that invite only outraged responses; and lots of yelling, waving of the arms, and whatever else might whip the place into a collective fury.

On that May 28, when Mulcair took his seat across from Harper, he forgot all about that predictability. Wherever Mulcair’s career leads, whether he wins big or loses badly, no matter the victory or disgrace to come, history might remember him best as the first prosecutor, even if only unofficially, to take on the allegedly entitled Mike Duffy. Eventually, Mulcair added preambles and “Mr. Speakers” to his queries; he added the indignation so at home in the House of Commons; and he deferred to his caucus and the other issues of the day.

But, for a few days in the spring, the prosecutor held court. Let’s review the tape.

The House of Commons wasn’t sitting when, on May 16, 2013, Duffy quit the Tory caucus and, on May 17, Nigel Wright quit (or was dismissed from) his post as Harper’s chief of staff. The same day that Wright left the PM’s employ, Harper’s office announced a trip to South America. The boss almost always ignores question period on Mondays, so he avoided the Commons effectively until May 28.

The Wright-Duffy revelations of May 2013 had fermented for nearly a fortnight before Mulcair took on the PM. Until then, the government fronted senior cabinet ministers who acted as Harper’s defenders du jour. Mulcair’s enemies love to paint him as an angry man, but that apparent tilt to a quick temper vanished as the Wright-Duffy affair ramped up. Witness his bellows at then-heritage minister James Moore:

Finally, on May 28, the PM took his seat. Anticipation mounted. The gallery filled. Mulcair recognized the moment and rid himself of old QP habits. He asked his questions. He stared at the Prime Minister. His caucus responded in kind, forgoing the usual banging of desks and cheering on of its leader. Only mild applause bridged the gap between Mulcair and Harper.

“Mr. Speaker, I have been very clear on this question,” said Harper, focusing his gaze on Speaker Andrew Scheer and then stumbling slightly. “This matter came to my attention—came to my attention two weeks ago after speculation appeared in the media on Wednesday, May 15. I was told about it. I demanded at that very moment that my office ensure that the public is informed, and they were informed appropriately.”

Mulcair rose, looked one way, then the other, and then finally at Harper. “When did the Prime Minister first speak with Nigel Wright about Mike Duffy’s expenses?” More quiet applause. NDP MP Murray Rankin, sitting beside his leader, remained perfectly still. Harper rose again.

“Mr. Speaker, as I have said repeatedly, my first knowledge of this was on the date and at the time indicated. Prior to that point in time, it was my understanding that Mr. Duffy had paid back his own expenses,” he said, rather concisely, almost as if saying more might invite a screw-up of some sort. Mulcair got back to his feet for a third time.

“Mr. Speaker, if the leader of the NDP is suggesting that I had any information to the contrary prior to this, that is completely false. I learned of this on May 15, and immediately made that information public, as I have said many times.”

Typically, question period gives each party an opportunity to show off a wide array of parliamentary performers who compete for scarce space on the evening news. On this day, Mulcair made sure he dominated the clips in the only logical way: He took most of his own party’s QP slots, leaving few other voices a chance. Harper, who may only answer five or six questions on an average day, responded almost every time. Regular watchers sat stunned at what was essentially a two-man show, a rarity in modern times.

The next day, on May 29, the NDP benches greeted Mulcair with a roar. Again, he led with his so-called “prosecutorial tone”—a melodramatic phrasing of his style that reporters favoured, but which really meant “clear and direct.” Again, Rankin stayed stone-faced on the front bench. His boss asked the other side’s boss about an email in which Duffy claimed to be “staying silent.” Harper pledged only to share all relevant emails with relevant authorities. He also took the offensive in reply to Mulcair’s second question. The PM explained to the House that Mulcair knew he was offered a bribe by the disgraced longtime mayor of Laval, Que., and waited 17 years to tell law enforcement. (Worth noting: Mulcair never accepted the bribe.)

On May 30, fresh from his trip so Latin America, Harper welcomed Chilean President Sebastián Piñera to Ottawa. Mulcair and Liberal Leader Justin Trudeau’s absences gave way to the deputies on all sides. The House learned of the government’s latest counter-offensive: Play the role of Opposition.

NDP MP Megan Leslie opened with questions about the Prime Minister’s evolving opinion of his ex-chief of staff. The Prime Minister’s Office first offered Wright its “full support” on May 16, and still defended Wright’s cheque for Duffy as honourable—but nevertheless accepted his resignation on May 19. “I accept that Nigel believed he was acting in the public interest, but I understand the decision he has taken to resign,” were the PM’s own words.

Moore, the heritage minister, agreed that Wright’s actions were inappropriate. But he was rather more concerned about Mulcair coming clean about allegations related to that apparent bribe offered to him in 1994. To the Liberal challenge of the day, Moore suggested that the third party pay more attention to one of its own senators, Pana Merchant, who benefitted from $1.7 million her husband transferred to an offshore trust based in the Cook Islands.

Mulcair and John Baird, then-foreign affairs minister, fought a crying baby in the gallery above for the House’s spotlight on June 3. Imagine the jokes you could make. Undaunted, Mulcair asked about Ol’ Duff.

“On what specific date did the Prime Minister first speak with Mike Duffy about his expenses?” Baird merely replied that senators should only expense proper claims, so Mulcair changed subjects ever so slightly. “Marjory Lebreton is a member of the Conservative cabinet,” he opened. “Did Senator Marjory Lebreton recuse herself from cabinet any time the Senate expense scandal was discussed?” This question came amid other questions about Lebreton’s role in the broader Senate expense scandal that involved several Conservative senators accused of playing fast and loose with the rules.

Baird would only remind the House of that bribe and Mulcair’s apparent irresponsibility, a complaint that never seemed to generate the anti-Mulcair headlines the Tories so desired.

On June 4, Mulcair scrummed with reporters. He recounted, in French, his characterization of Conservative attempts to dodge mounting scandals in the House—including a planned trip to Europe the following week. Having spent a few minutes answering questions, he departed—but not for long. A chuckling Mulcair returned to the scrum when reporters urged him to repeat his main messages in English.

Much laughter ensued as Mulcair played it up for the cameras. The scene served as a stark contrast to the Prime Minister’s relationship with the parliamentary press corps.

Eventually, Mulcair’s questions grew less pointed, and Harper’s entrenched defence proved that few of the Wright-Duffy scandal’s finer details would be resolved in the House of Commons.

Trudeau, meanwhile, spent the early months of the Wright-Duffy affair finding his question-period voice. Trudeau couldn’t compete with Mulcair’s tone and, much as he was gaining strength in opinion polls, he couldn’t intimidate the government in the House. On June 12, with summer on the way and the PM in Ireland, Trudeau paid for a verbal slip.

RCMP investigations fed headlines and ensured the Wright-Duffy affair’s survival of the summer barbecue circuit. Mulcair spent part of the autumn sitting—including this session on Dec. 3—asking the government about the emails of Ben Perrin, a one-time Harper legal adviser who’d apparently fouled up his record-keeping at the end of his time at the Privy Council Office.

Mulcair lapped up any excuse to keep the everlasting scandal at the top of question period’s spectacle. Witness that broad smile on Dec. 4 as Harper responds to Mulcair’s insistent questions about Perrin’s correspondence.

As 2013 drew to a close, the Wright-Duffy affair faded away, as it became clear that everything would eventually be settled in court. Enter the PM’s parliamentary secretary, Paul Calandra. On Dec. 10, Liberal MP Dominic LeBlanc had just asked the government if the Prime Minister knew about the alleged actions of Sen. Irving Gerstein in the Wright-Duffy affair. To that, Calandra had just one baffling response: The Liberals should join the Conservatives in affirming Santa Claus’s Canadian citizenship.

That quip, which would baffle anyone who’s not up-to-date on the latest parliamentary inside-baseball, is related to Trudeau’s then-assertion that Canada should listen to the experts when it comes to defining Canadian territory in the Far North—including the North Pole and Santa’s workshop. Later, Calandra again reiterated that Conservatives want to “keep Santa Claus Canadian.” A bumper sticker waiting to be made, and a fitting, ludicrous end to Nigel Wright and Mike Duffy’s tortuous run as star players in Parliament’s daily soap opera.